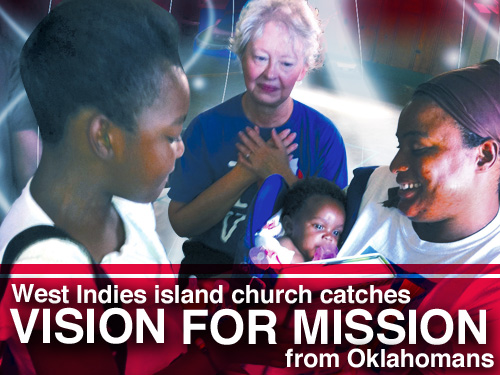 Sometimes the ends of the Earth begin in Oklahoma.

At least that is where the Great Commission began for nine members of Glen Baptist Church (GBC) (www.glenbaptistchurch.com) from St. Vincent and the Grenadines in the West Indies. The Vincentian congregation is partnering with Oklahoma Baptist churches after years of being the recipients of mission teams. Church members are moving out into the world with the vision of sharing the Gospel throughout the globe. Its just that the members’ journey began in Oklahoma, sharing with churches here how God has used Oklahomans to strengthen the church and inspire its members how to do ministry and missions.

This is not the first contact members of GBC have had with Oklahomans, for the past few years teams from Oklahoma City, Quail Springs (QSBC) have taken trips down to the islands, bringing Vacation Bible School, outreach teams and other ministry collaborations. This year, GBC pastor Sylvester King said it was time to return the visit and the service.

The team arrived in Oklahoma City on July 19 with several suitcases, some breadfruit and tri-tri fish to cook a traditional Vincentian meal for their QSBC friends. They returned to the island Aug. 8 with more than memories and a few souvenirs, they are taking back a fresh vision for missions.

“What we have been able to do . . . while here in Oklahoma has really clarified a lot of what God is already doing in our own lives,” said King. The island mission team was busy with ministry work in Oklahoma, while also making preparation for future outreach in the islands and beyond.

The team took part in mission work by helping with a VBS at the Baptist Mission Center in Oklahoma City. King led an adult Bible study during the VBS. Several children and adults made commitments to Christ. Later, team members were participant observers in a sports camp hosted at Quail Springs. King and his wife, Cleopatra, led Bible studies during the camp, and several young campers and one of their parents made a profession of faith.

After the camps, the mission team traveled to Davis, to experience the ministry of Falls Creek summer camp.

“I was particularly moved, inspired and challenged having visited Falls Creek,” King said. “I think the program at Falls Creek is an excellent one for young people and for all people. I look forward to having a group of young people come across (from GBC) next year to be part of this experience because it would definitely revolutionize their lives.”

Baptist General Convention of Oklahoma Executive Director-Treasurer Anthony L. Jordan met with King, and the BGCO agreed to partner with GBC to provide scholarships for several young people from the island nation to attend Super Summer leadership training and Falls Creek in summer 2012.

“They have already made some changes in the church’s website as a result of training and seem very motivated to make a bigger impact for the Gospel in the world,” Forbes said.

As part of the media strategy, the QSBC media team shot and edited two video presentations by King. One for use in a Facebook advertising outreach, and another that can be used as an Internet evangelism tool. The church now is planning to expand their use of digital media outreach.

“Together, we even came up with a new tag line for the church based on a local island expression: ‘Come Across and Discover the Cross,’” Forbes said.

Scan this code with your smartphone to watch the video with Pastor Sylvester King of GBC, St. Vincent and the Grenadines, or log on to https://www.baptistmessenger.com to view it there.

Part of the mission team’s visit and travel in the U.S. was sponsored through Erin’s Hope Foundation (http://erinshope.org) a foundation started last year by Oklahoma Baptists Keith and Dixie Swezey of Edmond in memory of their daughter, Erin, as a way to carry on the mission and Christian education activities she was involved in during her short life.

“The people of GBC have become dear to our hearts over the years as Dixie and I have been blessed to serve along side them on the islands,” said Keith Swezey. “But to see this new global vision being born in their hearts as we served together here in Oklahoma with them has us all excited about what God may be planning for this church.”

During his visit, King met with QSBC pastor Hance Dilbeck twice about the possibilities of forming a partnership between GBC and QSBC. The churches are exploring various continuing mission and ministry exchange projects beginning early next year. One project will be QSBC sending a construction team to work on an addition to GBC.

“Partnering with QSBC provides tremendous opportunities in the future with regard to leadership development and missional work which is very dear to my own heart,” King explained. “We have had the opportunity to meet and interact with a number of important stakeholders and our hope is that God over the weeks ahead will bring (the plans) discussed to fruition.”

In between ministry exchange visits and projects, the church members were able to see a bit of the Sooner State. The team visited the State Capitol and the National Cowboy & Western Heritage museum in Oklahoma City. After touring the museum, team members were given a demonstration of cowboy skills, including roping and steer riding, by students at Boys Ranch Town in Edmond. This tour was just one of many examples the team saw of Oklahoma Baptists working cooperatively to meet needs in the state.

“It was really refreshing to see how ministry is done here. To have a broader perspective on discipleship programs and Christian education programs has clarified in our own minds what needs to be done in regard to church growth and development,” King said.

The team also experienced a few ways Oklahoma differs from their homeland. For example, team members were astonished at the distances in Oklahoma—that Oklahoma City and Tulsa were further apart than the islands in their entire nation; that Oklahoma City to Dallas is as far as to the mainland of South America from St. Vincent; and that Oklahomans consider a drive of seven or eight miles to church or to the shopping center “nearby.”

While the distance traveled in Oklahoma may be great for the members of Glen Baptist Church, St. Vincent and the Grenadines, God has used Oklahomans to help take them further down the road to missions, clarify their vision for something even greater, the Great Commission. But their missions journey only began here.