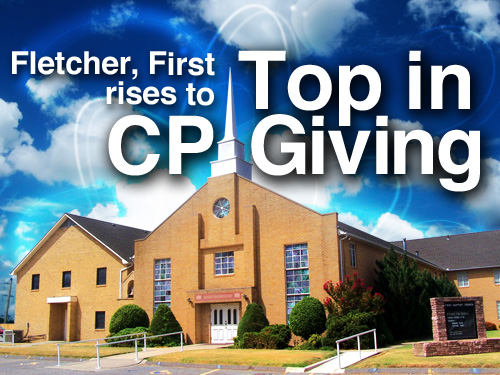 For a period of time, Fletcher, First raised its Cooperative Program (CP) giving every year, reaching a high of 30 percent of its undesignated giving. Today, that percentage sits at 25 percent, making it one of the top three churches in the state in percentage giving to CP.

Pastor Rodney Campbell, who has been at Fletcher for seven years, said the church has been at the top in percentage giving at least since the 1960s. And he doesn’t think that will change.

“Having heard others talk about the history of our church, there was a vision years ago of wanting to be a strong missions supporter,” said Campbell. “We have a heritage that has been passed down emphasizing how important it is that we be involved in missions all around the world. That is a heritage we are quite proud of, and it inspires each generation to continue that legacy.”

The church, which has a Sunday School attendance of around 180, is also involved in local ministries, mainly through the four-church ministerial alliance in Fletcher.

Campbell said the church’s annex was built in 2006 primarily using volunteer labor. Since completion of the building, it has been used for church ministries, including a Christmas dinner theater, Unhalloween carnival and Men’s Beastfeast, as well as community events.

“We partnered with a unit from Fort Sill—Delta Battery 2nd Battalion 6th Air Defense Artillery Brigade—to offer a marriage seminar to their troops, hosted a blood drive with the Oklahoma Blood Institute and participated in the Fletcher Frank James Day Celebration by hosting the quilt show for this community event.

“We also have been involved in the Angel Food program and participate in the local food pantry, but most of our benevolence ministry is done through the ministerial alliance,” said Campbell.

He added that Fletcher is one of Oklahoma’s small towns where visitation can be most successful at a local baseball/basketball game, the post office or the coffee shop.

“These are the places where needs are discovered and plans to meet them are put into place,” said Campbell. “Most times, members don’t wait for a church meeting or program—they just do it. They link arms with other Christians regardless of which church they attend and show Christ’s love through their actions.”

He also said the church has a missions house, which it is trying to get off the ground.

“We would like to have missionaries here locally to work with and minister to while they are on stateside assignment,” he said.

Campbell said every church he has served as pastor, which includes Rosedale, First; Maguire in Union Association and Norman, Bluelakes, have all been strong Cooperative Program supporters, but Fletcher is “definitely on a much higher level.”

Campbell said he doesn’t see the church ever cutting back on CP giving.

“There are occasions when we spend time discussing which needs the church should focus on, but I don’t think that would ever involve cutting CP,” he said. “I also think there are people who give generously to the church because they see the church giving generously. There’s a balance, but if we weren’t mission-minded, we would see a negative impact on income.”

He said CP has been adjusted at times, and before he came as pastor, the church tried a different approach and cut back to 20 percent, but designated a percentage to four missions offerings.

“My thought on that was that CP is not an offering,” he explained. “An offering is what we give above the tithes, and CP comes out of our undesignated giving. After I had been here a while, we eliminated those percentages and raised the CP back to 25 percent.”

He said the church promotes the special offerings, the Lottie Moon Christmas Offering for International Missions, Annie Armstrong Easter Offering for North American Missions and the Edna McMillan Mission Offering for state missions, as an opportunity to give above the tithe.

As far as promoting the Cooperative Program, Campbell said they use Missionary Moments every Sunday to share with the congregation how CP dollars are being used around the world.

“We also do a stewardship emphasis annually and use the stewardship committee during budget time to promote and explain the Cooperative Program,” he noted.

Campbell, who grew up at Midway Church in Caddo Association and graduated from Oklahoma Baptist University, the Southwestern Seminary Extension at OBU and received his doctor’s degree from Midwestern Seminary, said he believes churches need to maintain a balance between supporting CP and doing local missions and ministry, but “the CP is what allows us to carry the Great Commission beyond our own geographical area. It is our method of going into the uttermost parts of the world.”