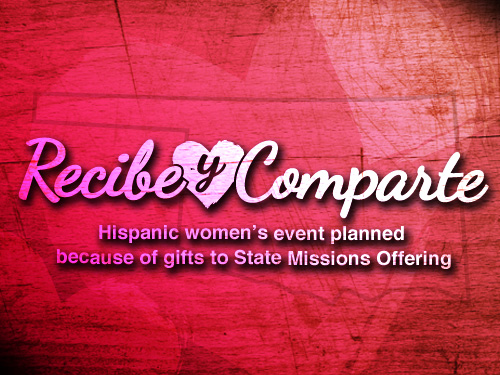 Consider the following information released from the 2010 U.S. Census, as reported by the Associated Press on Feb. 16:

• There are more residents in Oklahoma who identify themselves as Hispanic than those who claim to be Native American.

• Hispanics account for nine percent of the state’s 3.75 million residents.

• More than 17 percent of the 580,000 residents in Oklahoma City identify themselves as Hispanic, and 14 percent of Tulsa’s residents are Hispanic.

How are Oklahoma Baptists responding to these statistics? For Kelly King, Baptist General Convention of Oklahoma women’s missions and ministries specialist, the response included creating a unique opportunity for Hispanic women in the state through the Oklahoma State Missions Offering.

“A couple of years ago, we offered an Hispanic track at one of our statewide equipping events,” said King. “While we had more than 40 women attend, we realized that if we were serious about helping Hispanic women reach Hispanic women, we needed to create something entirely unique and totally in Spanish.”

The result is the upcoming Recibe y Comparte Women’s Conference on Saturday, Oct. 1 at Bethany, Council Road. The event is open to all Hispanic women in the state.

“The purpose statement for our women is to encourage them to embrace and echo God’s heart for the world,” said King. “The literal translation for embrace and echo really don’t convey the same message, but Recibe y Comparte does. It literally means to receive and then to share. That’s what we encourage women to do—receive what the Lord has for them and then share it with the rest of the world.”

Without support from the State Missions Offering, the conference wouldn’t be feasible.

“The entire event has been made possible because of gifts to the Oklahoma State Missions Offering,” said King. “This is just another example of what our entire state can do collectively than one congregation attempting to accomplish an event like this on its own.”

Because of the State Missions Offering allocation, the event will be offered at no cost to the attendees.

“Our intention is not to fund this event on an annual basis, but through the State Missions Offering, we’re able to get it off the ground and begin a new work among our Hispanic women,” explained King. “We’ll receive an offering during this year’s conference and our prayer is that the women will want to continue this on their own. In fact, we’ve already discussed the possibility of taking the event to Guymon in 2012.”

The Keynote Speaker for the event is Dina Flora Saldivar de Escobar from Monterrey, Mexico. She has served as a pastor’s wife for more than 40 years and has led many women’s conferences. Mayra Muñoz will be leading the praise and worship portion of the general sessions. Muñoz is originally from Barranquilla, Columbia, but now considers Oklahoma her home.

Breakout sessions will feature Marta Caceres, Coordinator of the Robert Haskins School of Leadership; Mark McClellan and his wife, Cindy, former International Mission Board personnel who served in Guatemala; and Janeth Carreon, a student at Oklahoma Baptist University. Mark McClellan now serves as dean of the Herschel H. Hobbs College of Theology and Ministry at OBU.

Sessions will focus on Baptist theology, evangelism, discipleship and family relationships. Lunch will be provided, and childcare will be offered by registration only.

Registration begins at 9:30 a.m., and the event will conclude at 3 p.m. Registration can be done either online at www.bgco.org/women or by mail. Registration forms are available by contacting the Women’s Missions and Ministries Office at 405/942-3000, ext. 4318.