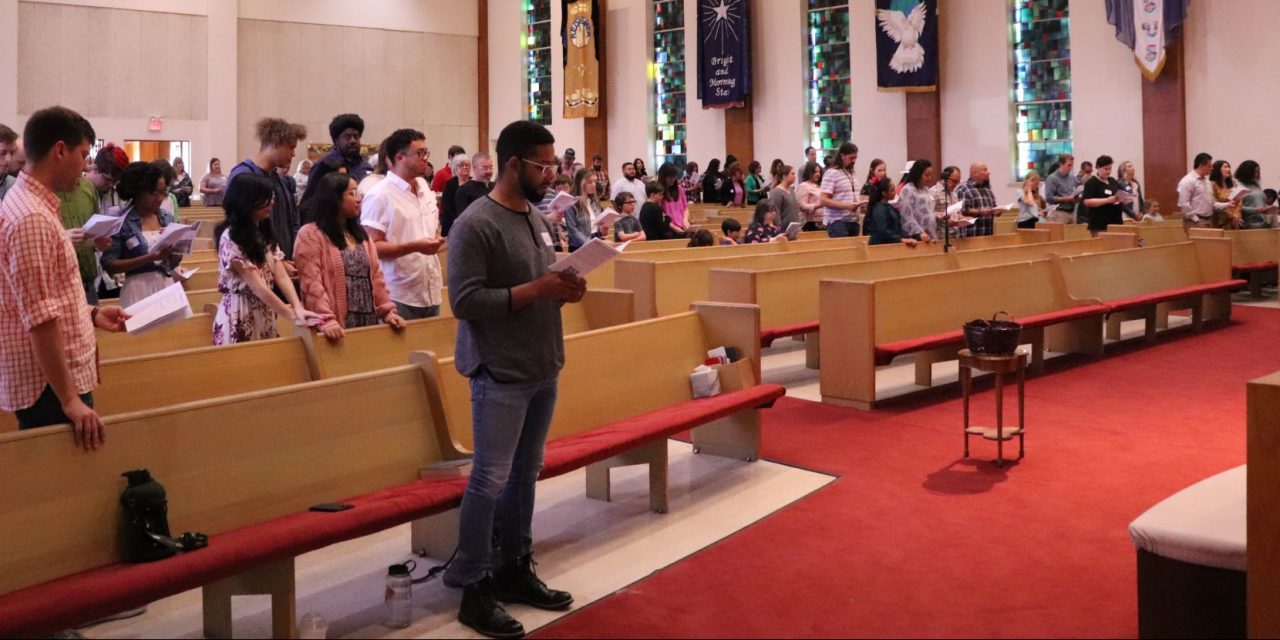 Above: Worshippers from nine ethnicities and two languages gather for bilingual worship at the first official gathering of Oklahoma City, Christ Community at Rancho Village.

Two congregations, Christ Community and Rancho Village, both of Oklahoma City recently decided to merge their congregations together, forming one new church. Around 180 people from nearly nine ethnic groups, and who speak two languages, comprise the membership of the new church.

John Mark Hart, former pastor of Christ Community, preached a message that was also translated into Spanish to the new congregation in an inaugural service held on Sunday, April 10.

Hart, along with an elder pastoral team of four others, will continue as pastor of the newly united church which has yet to decide an official name.

Presently, the church operates under the name Christ Community Church at Rancho Village and meets in the original Rancho Village facilities on Southwest 38th street.

“Rancho Village Baptist Church and Christ Community Church have been praying for God’s leadership for many years,” Hart said to the congregation. “I had on my heart this morning Psalm 66:19, ‘But truly God has listened; He has attended to the voice of my prayer.’ Can we celebrate today, what God has done?”

Hart said it was the shared ministry vision and diversity of the community that drew the congregations to conclude that they needed to become one.

“Christ Community Church was planted in 2010 and had been a very evangelistic, multi-ethnic church, but had been monolingual,” he said. “However, we had a few Spanish speakers in our church.

“Rancho Village was going through a transitional period, but they have a strong history of bilingual ministry,” Hart continued. “So we have two multiethnic churches, with different ethnic mixes coming together to be very multi-ethnic and bilingual.

Rancho Village was founded in 1949 and experienced great seasons of ministry over the year. Most recently, the church faced challenges after the death of long-time pastor Floyd McKee (1953-2020).

“After Brother Floyd passed away, after having been the pastor for more than 30 years, some of the leaders within the church began taking over the responsibilities of leading the church, while praying and determining what direction God was leading us in,” said Ever Borunda, Oklahoma Baptist Hispanic Ministry Partner and Rancho Village member.

“Under Floyd we had already begun having bilingual services, singing in both languages and separating for preaching in English and Spanish,” Borunda explained. “We continued the direction set by Floyd, but over the course of about three years we lost about half of our members.”

During the period of transition, Nathaniel Estrada, Rancho Village elder, led the church alongside Mark Madewell, another Rancho Village elder. “Over the last couple of years we sought to understand what God wanted us to do as a church,” Estrada said. “This (merger) is huge. We have had the vision since 2005 to have a multi-ethnic, bilingual congregation here in southwest Oklahoma City, because that’s what this community is.

“And now with Christ Community coming in with us, we are able to fulfill that vision,” Estrada continued. “We didn’t know that God was going to fulfill His plan for us through merging with another congregation.”

Hart explained that before the merger the two congregations spent more than a year meeting in the same building, holding joint worship services periodically and doing outreach and service projects together.

“That has helped us build relationships and trust to get to where we are in a healthy way,” he said. “I think our potential to make disciples in Southwest Oklahoma City is going to exponentially increase right now. We can do a lot more together than we could separately.”