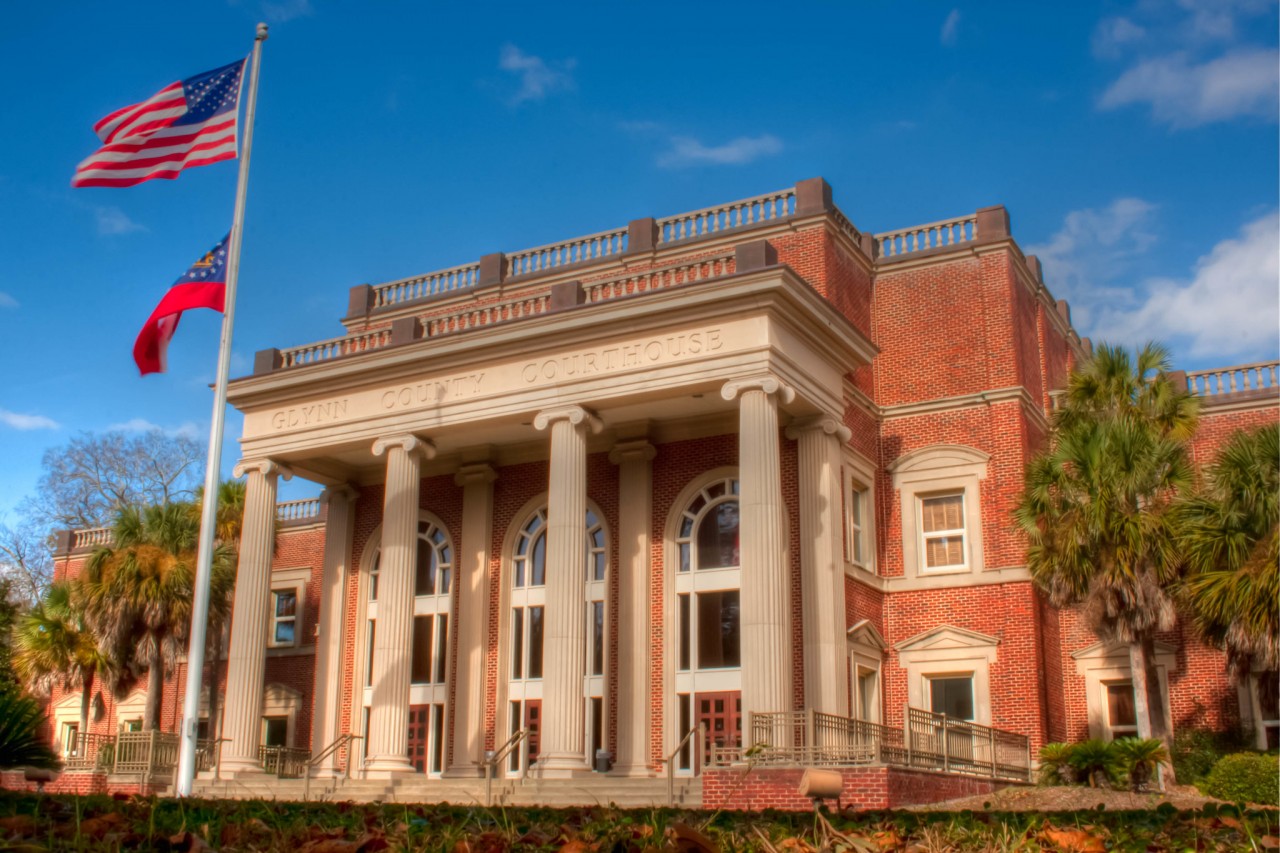 BRUNSWICK, Ga. (BP)—Nearly three months after his death, a graphic video of the moment a young black man was shot while jogging on a quiet street in a small town has inflamed tensions and spurred outrage.

Ahmaud Arbery, 25, was reportedly on a Sunday jog through a subdivision Feb. 23 when he was pursued by a white father and son, then shot during a resulting confrontation. 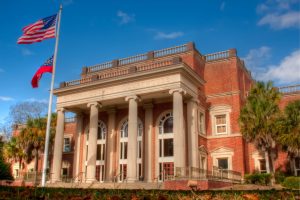 Thursday, May 7, the Georgia Bureau of Investigation charged Gregory McMichael, 64 and his son Travis McMichael, 34, with murder and aggravated assault. The charges came more than 10 weeks after Arbery’s death, but just days after a video of the shooting surfaced and quickly went viral, drawing national attention to what had been a local controversy.

“The atmosphere is one of great tension and anger, also a sense of disbelief, because of the amount of time that has transpired from incident to now,” said Pastor Todd A. Rhodes Sr., an African American whose church, Brunswick, Ga., Shiloh Missionary, cooperates with the National Baptist Convention USA. “If anyone would put themselves in the place of the African American community, and really take time to understand why there is such great anger on what has transpired, then I believe that everyone or anyone of any race, more than likely, would feel the same way.”

Rhodes, who like several others spoke to Baptist Press before the arrests of the McMichaels, has a friend in white Southern Baptist pastor Chris Winford, who leads nearby Brunswick, Ga., First and has swapped his pulpit with Rhodes on occasion. Thursday morning, before speaking with a reporter, Winford met with an ecumenical, racially diverse group of pastors to draft a letter encouraging swift justice in the case.

“We grieve over the loss of a young man in his prime,” Winford said. “Our hearts are broken for the loss of life and for the Arbery family. Our community is disturbed and disgusted by the video that was released. It’s disturbing and it’s very painful.

“The way it happened is just horribly wrong. It’s the ugliness of humanity, and then the community is frustrated with the process of justice or at this point, a lack of justice is the belief.”

Floyd, who along with Greear has championed ethnic diversity among Southern Baptists, said the killing is unacceptable in American life. 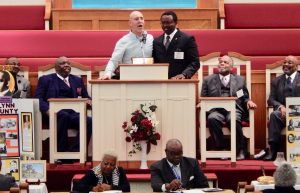 Todd A. Rhodes Sr., right, pastor of Brunswick, Ga., Shiloh Missionary, has swapped pulpits with Chris Winford, left, pastor of nearby Brunswick, Ga., First on occasion. Both men are calling for justice in the shooting death of Ahmaud Arbery.
Submitted photo

“The tragedy of Ahmaud Arbery’s deadly shooting is beyond description. Is this acceptable in American life? Surely not! Will justice prevail in this process? I pray so!” Floyd said. “The sanctity and dignity of every human life must be cherished in every way in America. Every person has value, and we must have a burden to protect and display this in our communities.”

Ausberry, who also leads the National African American Fellowship of the SBC, said he hopes the U.S. Department of Justice will investigate.

“We know that ultimately it is sin,” Ausberry said. “For too many people, when they see a black or brown person, they automatically see evil, a threat or a criminal. I don’t care what you call it, the cost is the loss of human life.

“There is something deeply wrong in the psyche of America where a young black male life is treated with such contempt. It should disturb all of America, not just black America.”

After the Feb. 23 shooting, the older McMichaels told police he thought Arbery resembled a man suspected of break-ins in the area, according to a New York Times report. McMichaels said after seeing Arbery on the street, he alerted his son Travis McMichaels. Armed with a shotgun and a .357 Magnum, the father and son jumped into a pickup truck, blocked Arbery’s path and shot him—claiming to police it was in self-defense.

All indications are Arbery was unarmed. A cell-phone video, presumably captured by a passerby, appears to show Arbery jogging—something his family and friends have said he did regularly for fitness.

The video shows Arbery being shot and falling to the ground, but the details of the encounter are unclear. USA Today reported Thursday that a third white man might have been involved in the case.

Referencing the video, Ausberry said Arbery “was stalked as a hunter tracks down his prey. He is dropped like a deer in the woods, like an animal.

In a Twitter video posted Wednesday, Greear said it is understandable that African Americans are especially hurt by the tragedy because of historical injustices suffered.

“When one part of us hurts, all of us hurt,” Greear said in the video. “And we walk through this together as family, and we grieve and we lament. But we live in a society where these things are still in question, and we pray for the end to this kind of injustice, and pray for an end to the disunity that often tears us apart.

“For those of you who don’t feel this tragedy in that way, I want to encourage you with Gal. 6:2, that part of what it means to walk with Jesus is to bear one another’s burdens.”

In a blog post Wednesday, Moore wrote that he cannot fathom a scenario that justifies the killing.

“There is no, under any Christian vision of justice, situation in which the mob murder of a person can be morally right,” Moore wrote. “Those who claim to have a high view of Romans 13 responsibilities of the state to ‘wield the sword’ against evildoers ought to be the first to see that vigilante justice is the repudiation not just of constitutional due process but of the Bible itself. And, of course, the Bible tells us, from the beginning, that murder is not just an assault on the person killed but on the God whose image he or she bears.”

Moore continued: “Sadly, though, many black and brown Christians have seen much of this, not just in history but in flashes of threats of violence in their own lives. And some white Christians avert their eyes—even in cases of clear injustice—for fear of being labeled ‘Marxists’ or ‘social justice warriors’ by the same sort of forces of intimidation that wielded the same arguments against those who questioned the state-sponsored authoritarianism and terror of Jim Crow. And so, they turn their eyes.”

Two prosecutors recused themselves in the case, based on conflicts of interest, the New York Times reported. The case was assigned last month to prosecutor Tom Durden of the Atlantic Judicial Circuit in Georgia. In a statement released Tuesday, May 5, Durden said the case “should be presented” to a grand jury, but added that current restrictions on legal proceedings because of the COVID-19 pandemic could delay that action.

The McMichaels were taken into custody Thursday, according to multiple news reports.

“All I want to do is get justice for my son,” Marcus Arbery, father of Ahmaud, told The Associated Press. “This is terrible. It could happen to anybody’s kid.”

The Brunswick community is struggling to cope with the incident. At least one peaceful protest has been held in the mostly white community where Arbery was shot. A prayer vigil is being planned for the Arbery family and churches are praying for a proper resolution, according to Rhodes.

What is perceived as a “nonchalant” mentality in the criminal justice system, Rhodes said, “not only angers the African American Brunswick County community, but it also angers our brothers and sisters in Christ in the Caucasian community who are equally angry and want justice in its most immediate and legal form.”

Rhodes has led members of Shiloh Missionary Baptist to include the Arberys, the McMichaels and the Brunswick community in twice-daily prayer calls, and continues to encourage the congregation to avoid political and social rhetoric surrounding the case.

“It’s very apparent to me that if anger is left unchecked, then of course we know that the Bible says that it does not produce the righteousness that our heavenly Father expects, and especially from His children,” Rhodes said. “People of faith can make so much more of an impact in the community that has experienced such an unjust tragedy (if) we come together—be we black, or white, or Hispanic, or Asian, male, female, young, old, rich or poor—as people of faith in God.

“It is our faith in God that connects us and helps us to not take part in the political or the social rhetoric that people often use to spark the fire that can blow up the keg.”

Winford said Brunswick can set an example of what to do when things go wrong.

“God’s hand has been on this community. God has been gracious and kind to us,” Winford said. “And I think this is a time now for Brunswick to show a world how to respond correctly when things aren’t done correctly… I think we have a great opportunity to bring good out of a horrible situation.”