Victor Cope says he has become a better Christian 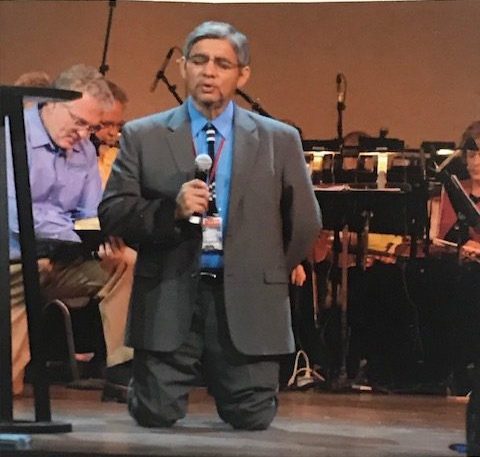 Cope, is a member of the Citizen Pottawatomie tribe who also identifies with the Creek and Absentee Shawnee tribes. He graduated from Oklahoma Baptist University in 1979, has been in the pastorate 44 years, an educator for 36 years, and director of Indian Falls Creek for 30 years.

For 32 years, Moore, First Indian has taken mission trips to the Blackfeet reservation in Browning, Montana (1,500 miles one way), to western Oklahoma and to eastern Oklahoma.

“Indians reach Indians. That’s the primary mission,” Cope said. “I know it’s very important for us to go. We can have greater success helping another Indian church.”

Cope was hired in 1989 as the Indian Education Director in Tecumseh public schools. Today he teaches multicultural studies involving Native-, Jewish- and African-Americans.

Last spring Cope, deemed an “essential person” in Tecumseh schools because of federal programs, spent days alone in a big building. In the past his personal study was to help him be a better pastor, he said. Now because of devotions and scripture readings added during no-student time at the school, “I have become a more prayerful man, I’m engrossed in learning more about the Bible, and those two things have helped me become a better Christian.”

Cope exercises an hour or more a day, seven days a week, to alleviate the stress of pastoring and teaching.

Because of the generous giving of Oklahoma Baptists through the Cooperative Program, an amazing array of ministries are supported. This unified giving encourages fellowship with other believers all over the world. Collectively, Oklahoma Baptists are advancing the Gospel together. Learn more at oklahomabaptists.org/cp