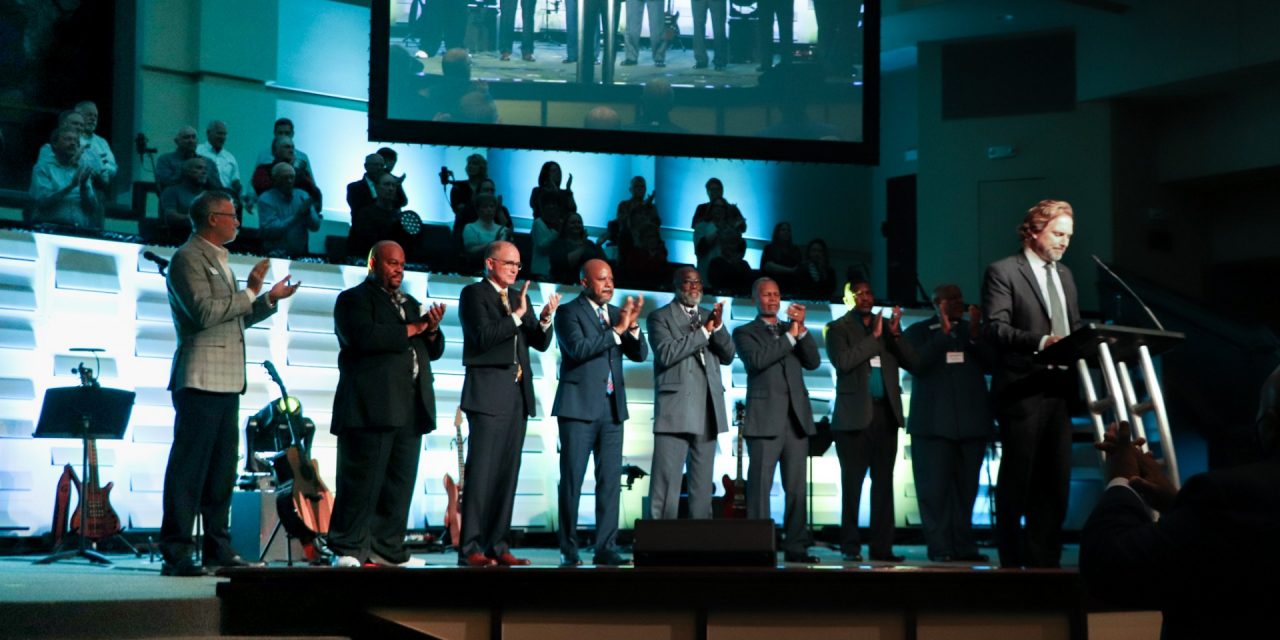 BROKEN ARROW—On Tuesday, Nov. 10, Oklahoma Baptists gathered at Broken Arrow, First for the 114th Annual Meeting. The 2020 Annual Meeting was conducted as a one-day, abbreviated meeting and featured times of preaching, essential business, as well as a special focus on the upcoming 100th anniversary of the Tulsa Race Massacre.

Nearly 500 registered Messengers from churches across the state participated in Oklahoma Baptists’ Annual Meeting. COVID-19 protocols and precautions were observed throughout the meeting. 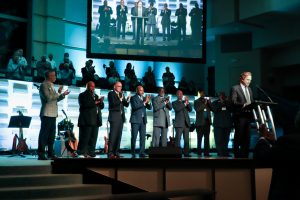 OBU President Heath Thomas announces the 1921 Scholarship which will be awarded annually to two African American students. Officers of the Oklahoma Baptists African American Fellowship are featured on the platform during Thomas’ announcement. The Fellowship will help identify qualified young men and women for the scholarships.

A unique program focal point for the 2020 Annual Meeting was a segment on “Remembering the 1921 Tulsa Race Massacre.” With the 100th anniversary observance of the tragic historic event taking place in 2021, Oklahoma Baptist leaders called to mind the spiritual and relational significance of the occasion.

A video was shown featuring Anthony Scott, pastor of the historic Tulsa, North Tulsa church, and Hance Dilbeck, executive director-treasurer for Oklahoma Baptists. The video dialogue recounted the tragic historic event on May 31, 1921, in which the entire Greenwood District of Tulsa and Black Wall Street were destroyed.

Scott recounted how hundreds of lives were lost and a thriving Black community was destroyed overnight. He said, “I pastor First Baptist North Tulsa, which is the oldest African American congregation in north Tulsa. At the time of the massacre, our church was 22 years old, and actually, we’re located right in the heart of where the riot took place.

“You still see the lingering educational disparities, economic disparities, and then there’s just a psychological impact that takes its toll on a community for generations. Almost a sense of hopelessness, we’ll never have anything, and it really still resonates, so I hope one of the positive outcomes of this recognition is that somehow the psyche of north Tulsans can be lifted.”

Dilbeck underscored the biblical idea of remembering, calling to mind Stephen in the Book of Acts recounting the suffering the prophets underwent. “We remember for many reasons,” Dilbeck said. “But we primarily remember so we do not repeat.”

Dilbeck added, “We know political leaders are going to be involved, business leaders, community leaders, state leaders, and if our Baptist leadership is not engaged then we are missing a real opportunity to show that we are aware of what’s going on in our state, and that we have a relevant Gospel message for even the most dark and tragic season of our history.”

Scott said pastors and others could be “praying that the example that we display is one that we want the rest of the nation to follow. We should be praying, as we move forward, certainly for true and ultimate healing to take place and then also be praying that beyond the memorials and commemoration that some real tangible impacts and effects that can help generations of people who have been ostracized and left behind that they can move forward.”

Prayer was offered for pastors in the Tulsa area. Mark Dance, Oklahoma Baptists east central regional ministry partner, voiced prayer for these pastors that “they could shine the light of Christ and help bring healing and hope (in 2021 and the 100th anniversary commemorations).” 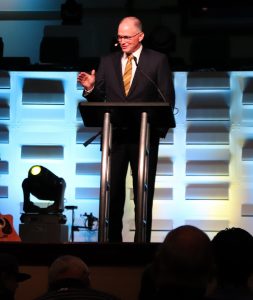 Blake Gideon, Oklahoma Baptists’ president, preached from Acts 8 in his presidential address and gave examples of how the Gospel can advance unhindered, referring to the Annual Meeting’s theme “Unhindered.”

In his executive director’s address, Dilbeck preached from 1 Corinthians 1, addressing concerns involving pride and disunity of the church.

“First Corinthians chapter 1 teaches us, brothers and sisters, both in the local church and in the Gospel fellowship, like Oklahoma Baptists,” Dilbeck said, “we find unity in the message of the cross… We know in Oklahoma that we were all a bunch of nobodies until ‘Somebody’ died on the cross of Calvary for us.” 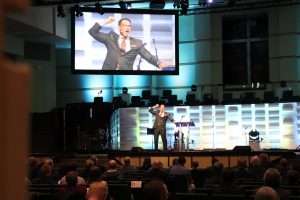 Andy Taylor, pastor of Broken Arrow, Arrow Heights, delivered the annual sermon and preached from 2 Timothy 2. The points he made to Oklahoma Baptists, specifically to pastors, were return to your purpose, remind yourself of the price and reignite your proclamation.

Officer elections and other business 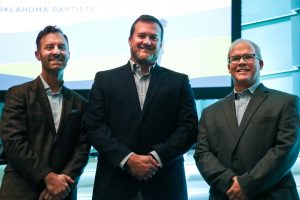 Due to the abbreviated program, the Resolutions Committee did not present resolutions at the 2020 meeting. In addition, various matters of business were addressed. 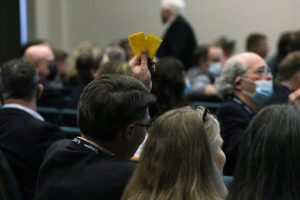 Messengers participate in a vote by ballot.

Messengers to the annual meeting heard fiscal reports from 2020. Dilbeck thanked Oklahoma Baptists for their faithful giving, amid the challenges of COVID-19 and 2021, and he relayed how the state convention made mid-year budget adjustments.

“Our staff and our board have exercised extraordinary fiscal discipline in this challenging year,” Dilbeck said. “They managed to severely limit our spending and created an adjusted (and reduced) budget to be responsible stewards to what God has given us.”

Messengers also approved the 2021 Cooperative Program spending plan, set at a $23.1 million goal, which represents a smaller budget goal from prior budget year “in light of economic uncertainties.” The 2020 Cooperative Program Objective had been set at $26.1 million, prior to mid-year adjustments. 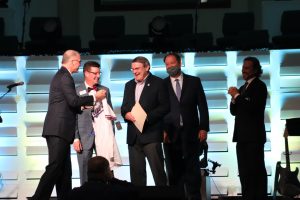 Reports were given from all four affiliates: Oklahoma Baptist University, Oklahoma Baptist Homes for Children, Baptist Village Communities (BVC) and the Baptist Foundation of Oklahoma—now known as WatersEdge. Bill Pierce was recognized for his 30 years of service as president of BVC.

The 2021 Annual Meeting is now scheduled for Nov. 8-9 at Oklahoma City, Southern Hills.

As 2020 nears its end and as pastors look toward 2021, Dilbeck reminded Messengers of the shared mission given to the church by Jesus. “Our mission is simple: we encourage one another to advance the Gospel. In challenging times like these, let’s continue to advance the Gospel together.”

For more information about the 2020 Annual Meeting, visit oklahomabaptists.org/annualmeeting.