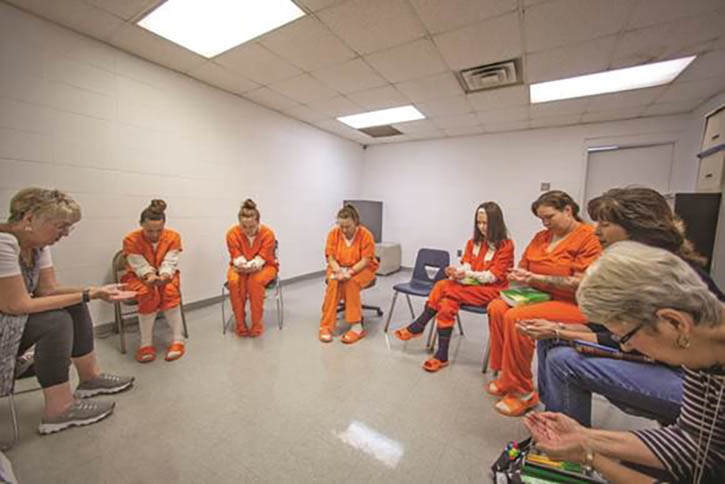 RUSK, Texas (BP) — Tuesdays mean going behind bars for volunteers with Freedom with Christ who meet with men and women in the Cherokee County Jail each week for Bible study and prayer. 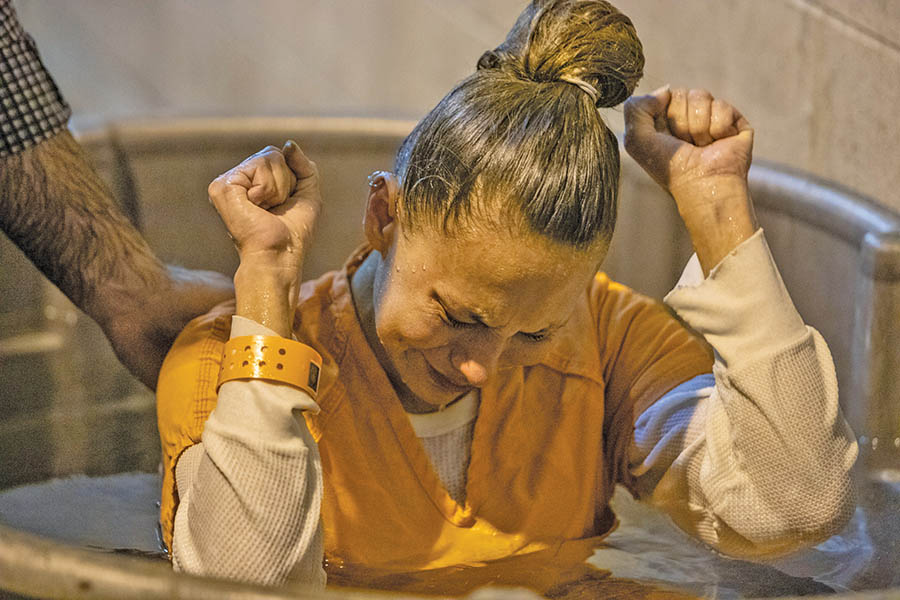 An inmate at the Cherokee County Jail is baptized as a result of the Freedom with Christ jail and prison ministry of First Baptist Church in Rusk, Texas.
Photo submitted

Freedom with Christ, a ministry of First Baptist Church in Rusk, Texas, also provides Bibles and study materials to prisoners in other correctional facilities in Texas and six surrounding states.

FBC Rusk is continuing a work pioneered by Terry Neid, who until his death last year, came weekly to the jail. His widow continues to volunteer.

One Tuesday morning last fall, Southern Baptist TEXAN photographer Andrew Pearle joined the Freedom with Christ ladies team as jail personnel escorted them through security checkpoints into a small room with a desk and chairs arranged in a circle.

Miss Sue* of FBC Rusk introduced the female inmates to Pearle as they filed in for a Bible study, which is limited to six inmates, per jail regulations, Sue told the TEXAN.

“They came in with a hunger for God’s Word that was so unique it was humbling,” Pearle said of the inmates, two of whom were preparing for baptism.

“We’re going in the paper for something good, not bad,” joked Martha, a former Jehovah’s Witness who took the lead in the day’s discussion.

As Sue mentioned the prophet Daniel’s faithfulness in prayer, conversation about the movie “War Room” arose among inmates who said they had “war room” corners where they prayed in their cells with Scripture adorning the walls.

The day’s main lesson was about Jonah, with volunteers using the biblical account as an analogy to help the women see their time in jail as preparation for how God would use them when they get out, Pearle said.

For homework, the inmates had been assigned to write their own stories in booklets. This day, they were given time to decorate their stories with colored markers.

“Kathy, who was scheduled to be baptized that day, drew the process of God’s leading her out of darkness into light,” Pearle said. “Others drew crosses with colorful rainbows. Some drew families.”

From the Bible study, the group moved to another part of the jail where a water trough had been set up as a baptistery. FBC Rusk pastor Brian Givens baptized Kathy, who rose from the waters crying joyful tears. Jeff Carroll, church worship leader, led the group in “I Have Decided to Follow Jesus.”

During the earlier Bible study, one woman indicated her brother had also been jailed there recently. Volunteers assured her they would get him a Bible if needed.

“Without question we responded and sent a Bible,” Sue said.

Bible study and prayer with men and women in the Cherokee County Jail are a key facet of the outreach of Freedom with Christ volunteers from First Baptist Church in Rusk, Texas.
TEXAN photo

The church’s ministry of distributing Bibles to inmates across Texas and beyond started in 2016 after a letter requesting a copy of the Scripture arrived from a male prisoner who had heard of the church’s Tuesday ministry.

To date FBC Rusk has distributed more than 6,000 Bibles, none more significant than the first one in confirming the value of the work. A letter from the cellmate of the young man described how God was working in his friend’s life.

“We have spent countless hours together reading and studying God’s Word, praying and sharing our faith,” the cellmate said, adding that the young man now preaches in the prison, even to inmates not allowed at regular services.

“He has permission to preach to the darkest of the dark, the highest security prisoners,” Sue said.

Many who are incarcerated in the county jail go on to complete their sentences in other correctional institutions where they join or begin Bible studies and prayer groups.

FBC Rusk sends New King James Version, Life Recovery and Spanish-language Bibles. Included with each Bible are handwritten letters with Scripture along with prayers, materials explaining the plan of salvation and baptism, information on how to follow Jesus, Bible reading and prayer guides, devotionals and lists of shelters and churches.

Each Bible comes with an invitation to pray for the ministry, which many prisoners write to say they are doing.

“I want you to know that D.M. and I and the rest of our brothers here on the Faith Base dorm (64 of us) have been praying for you and the ministry, praying that the Good Lord will send you help in providing money for you so that you will be able to keep on blessing people with Bibles and materials,” one inmate wrote, concluding by quoting 2 Corinthians 9:10.

Freedom with Christ documents every Bible distributed and letter received. Volunteer letter writers work to prepare the Bibles and materials for sending. Around 100 letters from inmates expressing thanks or requesting Bibles arrive each week, many with inspiring anecdotes.

“I saw a young fella here who was very lost, scared and by himself,” one recently transferred inmate wrote. “I watched him take his Bible out of an envelope and I recognized your letterhead on it. So I asked him if he knew you and the Tuesday ministry. He said yes and as he looked up, it was as though fear left him and hope filled his day. We now visit and study together.”

View all posts by Jane Rodgers