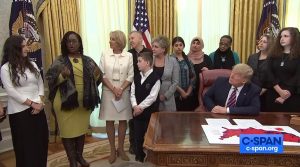 In observance of National Religious Freedom Day, President Donald Trump hosted a gathering Jan. 16 of students from different religions to affirm the right of students to pray in school.
Screen capture from C-Span

In a statement released by the White House detailing the facts of the briefing, the president said, “Our Founders understood that no right is more fundamental to a peaceful, prosperous, and virtuous society than the right to follow one’s religious conviction.”

“President Trump is updating Federal guidance regarding protected prayer and religious expression in public schools, which has not been issued since 2003,” the fact sheet read. “The update will help safeguard students’ rights by giving education providers and students the most current information concerning prayer in public schools.”

The release continued by detailing other aspects of student prayer and exercise of religious freedom which the federal guidance clarifies.

While no changes to actual law will be made, the White House is seeking to “empower students and teachers to exercise their rights,” NPR reported.

During the event, Trump gave students in attendance the opportunity to share experiences of when their religious freedom in schools had been restricted.

Students of varying ages and religions shared experiences of bullying, harassment and discouragement—each student thanking Trump for his work in upholding the First Amendment.

Trump responded with reassurance to each student, shaking their hands and thanking them for speaking.

In the White House statement, the Trump administration also announced the issuance of “nine proposed rules to protect religious organizations from unfair and unequal treatment by the Federal government.”

Ronnie Floyd, president and CEO of the Southern Baptist Convention Executive Committee, noted that emphasis on religious freedom is imperative.

“For years I have sensed a growing restraint being placed upon students, faculty and administration about practicing prayer in public schools,” Floyd said. “I am convinced the greatest need in our schools is to release students, faculty and administration to live out their faith publicly, including the practice of prayer. Therefore, I am thankful for any clarity about First Amendment rights that releases all persons to practice their faith in our schools and in every public setting.”

Alliance Defending Freedom CEO and president Michael Farris noted that religious freedom is the “headwaters of all freedoms.”

“We’re grateful that President Trump and his administration have taken numerous opportunities to acknowledge and protect it for all people and organizations of faith,” Farris said, in written comments on the briefing. “Unfortunately, some states and local government officials continue to treat religious organizations as second class citizens, and discriminate against them in government programs.”

Farris said that students across the country are still finding their First Amendment freedoms under attack the moment they set foot on their public school campus and are denied the freedom to pray together during free times.

“We affirm the administration’s proposed rules designed to ensure that the government doesn’t treat religious individuals and organizations as second-class to secular institutions,” Farris said. “The president’s directive requiring all public schools to respect their students’ religious liberty, is also a welcome step to remedy these attacks on people of faith.”

President Trump assured the public that his administration will continually seek to uphold religious freedom.

“We will not let anyone push God from the public square,” Trump said. “We will uphold religious liberty for all.”