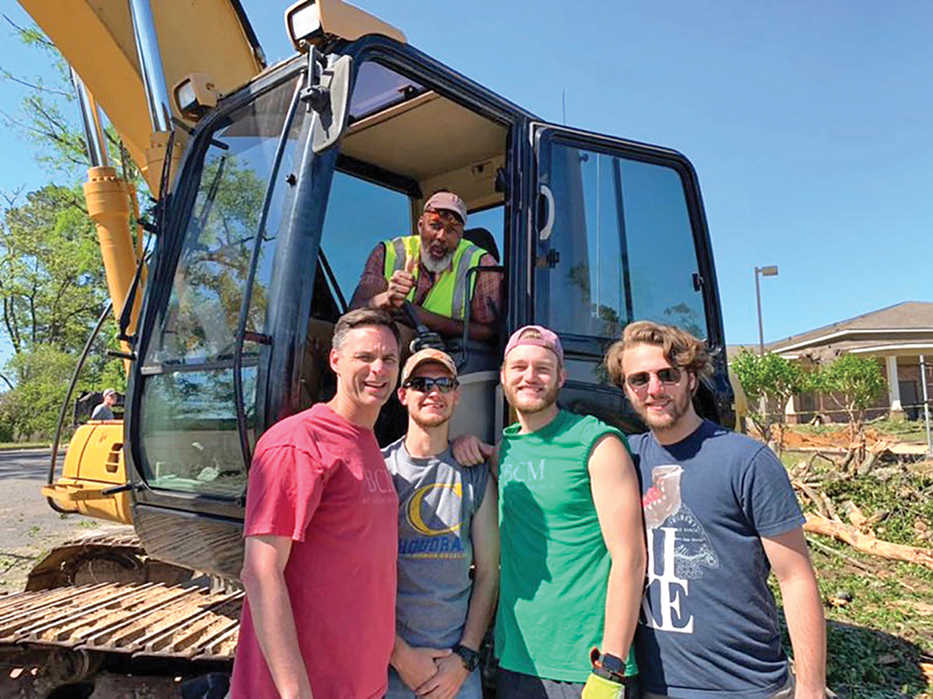 RUSTON, La. (BP) — Karl Malone, the NBA legend known as “The Mailman,” made a delivery to the Baptist Collegiate Ministry at Louisiana Tech. 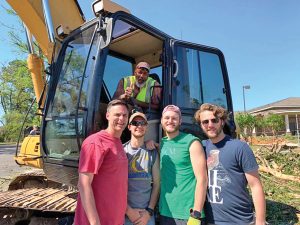 Aboard his multi-ton CAT Excavator, Malone lifted a stately oak tree that crashed into the BCM’s chapel in an EF3 tornado that left Ruston, La., with widespread damage April 25 around 1:50 a.m.

Accompanying a video of Malone at work, an observer posted on Facebook April 26, “Karl Malone, former Tech basketball legend and also NBA legend, is manning the yellow CAT machine to help bring down this MONSTER tree on top of the La. Tech BCM.

“He just wanted to help the BCM! Thanks, Karl ‘The Mailman’ Malone. You ‘delivered’!!!”

The BCM, also on April 26, posted: “Early this afternoon, Karl Malone showed up at the BCM with his team & helped get the last big tree off our roof! Thanks to Karl, the chainsaw crew & our students for helping today with a LOT of cleanup!” 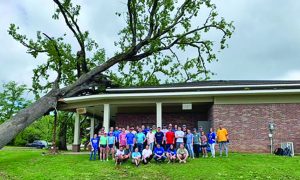 Volunteers helping with the post-tornado cleanup at the Baptist Collegiate Ministry at Louisiana Tech gather for a photo. Photo submitted

“It’s been amazing to see so many people to give of their time and resources,” Kevin Inman, Louisiana Tech BCM’s director, told the Message, newsjournal of the Louisiana Baptist Convention. “We are just so grateful for every single individual who has helped us during this time.”

One alum lamented on the BCM Facebook page, “It’s tough to see this kind of damage to a building that’s been so much more than a building to so many of us.”

Although the chapel was damaged, other parts of the BCM facility were intact. Students will utilize the lobby for worship, lunch meetings and other outreach activities while the chapel is repaired.

“We ask for your prayers as the BCM moves forward with plans to repair the roof and interior of the chapel and grounds of its campus,” Inman said. “And pray for our students as they finish the quarter strong.”

As the BCM stated on its Facebook page: “We have 3 more weeks of Soul Food lunches, 3 more weeks of Elevate worship, a large free pancake dinner for finals week & many more student activities planned before May 24th!”

The April 25 tornado in Ruston killed a mother and her 14-year-old son and left a trail of damage through the Louisiana Tech campus, particularly several athletics facilities, and other parts of the city located about 50 miles east of Shreveport. Barry Joyner, director of missions for the Ruston-area Concord-Union Baptist Association, told the Message that no churches reported damage. 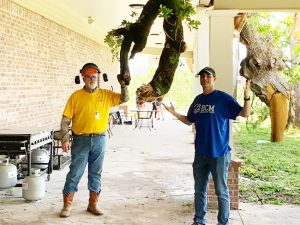 In Converse, La., a pastor’s wife and her son were grateful that several trees missed their parsonage in a tornado nearly 100 miles southwest of Ruston.

Dawn Asbell of San Patricio Baptist Church said her husband Danny was out of town as she and her son Noah moved to the hallway shortly after midnight and suddenly felt the house shaking.

Noah immediately began to pray, and moments later a pine tree and oak tree slammed onto the ground one foot from the home.

“God was definitely with us last night,” Dawn Asbell told the Message. “I normally don’t get scared, but last night felt different. Noah was a rock; he was more calm than me. He said, ‘Mama let’s pray.’ So we did.”

Damage to the church was limited to a broken window.

“When things like this happen, you remember what is important,” Asbell said. “Don’t sweat the small stuff.”