The Gospel According to Bart 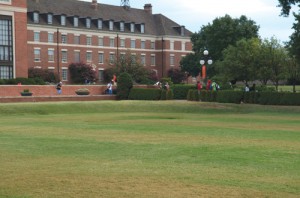 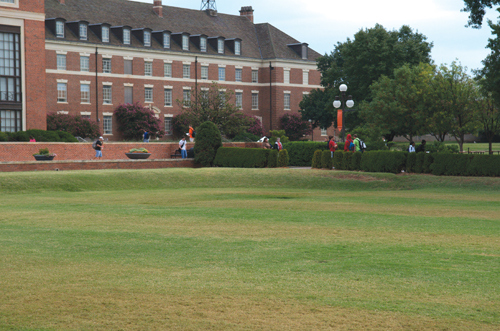 When Dane Hadley, 21, first arrived at the University of North Carolina-Chapel Hill from Havelock, N.C., he was not totally unfamiliar with the historical-critical method of biblical interpretation. Hadley had briefly encountered the various ways people interpret the Bible during his time as a lifelong Southern Baptist. He was not fully prepared, however, for his Introduction to the New Testament class with Professor Bart Ehrman.

Hadley remembered one of the professor’s first lectures. As Ehrman entered the classroom, his first question to the class was, “How many here hold to the inerrancy of the Bible—that the Bible is God’s infallible Word?” Many hands are raised. His second question surrounds J.K. Rowling’s novel, Harry Potter. “How many have read Harry Potter all the way through?” Ehrman asks. More hands are raised. In follow-up he asks, “How many have read the Bible from cover to cover?” Few hands were raised. Point made.

Many struggled to overcome the “facts” as presented by Ehrman as Christian orthodoxy as defined by revelation from the Bible was washed away by the tide of literary deconstruction. Hadley readily admits that when the Bible is forensically examined, none is better than Ehrman at pointing out the Bible’s “discrepancies.”

Bart D. Ehrman, the James A. Gray Distinguished Professor of Religious Studies at the University of North Carolina-Chapel Hill, has become notorious as the professor who with one lecture can totally unravel the faith of college students.

Ehrman’s newest book, Jesus, Interrupted: Revealing the Hidden Contradictions in the Bible (and Why We Don’t Know About Them) is, by far, the most pedestrian of his books. By his own testimony, this book took him two weeks to complete and is part autobiography, part Sunday School for agnostics. Soon after acquainting the reader with the fact that he is a lapsed evangelical of the Moody Bible Institute and Wheaton College variety, he begins to unfold what reads like a refutation of everything held as true by most Christians. Ehrman knows if there are errors in the Christian canon, then the veracity of Christianity can be called into question as little more than a cobbling together of ancient texts over time written by erring copyists with political agendas.

Mistakes by copyists or other agendas in the Bible seem to become radically plausible especially when illustrated by Ehrman’s use of a simple exercise. The professor enters the room almost the same way every day —with a can of Diet Pepsi. After taking a drink of soda, he normally begins his lecture. On one particular day he desired to show the impossibility of unity in the recording of history even by eyewitness accounts as he asked his students to write down on a piece of paper exactly what they observed him doing from the time he entered the room until he began his lecture.

The results were devastating. No one had anything in the same order and some had omitted key actions all together. This experiment has been picked up by other professors at schools all across the nation and most students remember this illustration as reinforcement that the Bible, if it is to be represented in any way as bearing a human component to its inspiration, may well contain error.

Ehrman’s disciples are appearing on campuses all across the world. Oklahoma State University’s “Secular Society” is a group of students committed to advancing the “secular enlightenment” with the ideas of the new atheism found in the writings of Richard Dawkins, Christopher Hitchens and Ehrman. Their goal is to dismantle the Christian faith, showing it to be a logical absurdity in the lives of young people who have been duped by preachers intent only on power and control.

Brent Prentice, senior pastor of Stillwater, Eagle Heights, previously served as a campus minister with the Baptist General Convention of Oklahoma (BGCO). In that role, he encountered many students raised in Southern Baptist churches who faced the intellectual challenges that college classes brought to them without an adequate grounding in the core doctrines of the Christian faith. Now, as a pastor where a major international university is located, he sees that many of the students who come to his church cannot articulate the Gospel with clarity or explain the significance of the work of Jesus Christ on the cross. Prentice observes that they “are fairly good at morality and fairly inept at getting at ‘the why’ or the reason they should not have (as an example) pre-marital sex. They know they shouldn’t, but they really can’t tell you why God doesn’t want them to do that.”

Prentice believes this result to be the lack of time and focus by parents long before they enter college.

“The time youth ministers and churches put into discipleship is not enough to overcome the lack of teaching and instruction they should receive at home,” he states.

The greatest numbers of students arrive at college from homes—even Christian homes—that have relegated the teaching of Christian doctrine to youth ministers and other staff when parents should have taken the primary role in the lives of their children. The result is a growing number of students who are easily swayed by the teaching of professors like Ehrman, as they often appear more intellectually compelling than their parents or pastors.

John Strappazon, BGCO collegiate ministries specialist, believes that “individuals like Ehrman leave students bankrupt for meaning, confused, angry or at best cynical.” As evidenced by Ehrman’s now famous classroom tactics, Strappazon realizes that most students have not thought through many of these issues and remain at a distinct disadvantage, not wanting to be embarrassed publicly in class. One of the goals of campus ministers is to expose students “to equally intelligent people who could refute what they are saying.”

Strappazon is quick to state that goal of Baptist Collegiate Ministries (or BCM as it is commonly known) is to bridge the gap between the school and the church as direct outreach to students brings a gospel witness to many who might never be exposed directly to the Gospel. The local congregation then becomes the focus of the ministry, where students can grow in their understanding of the Bible and be trained through intensive Bible study to confront and refute such teaching in classes across Oklahoma universities whose professors are inspired by Ehrman’s writings.

Prentice desires serious Christian discipleship of college students to be one of the goals of his ministry as a pastor. He works to carefully expose the errors of Ehrman and those like him.

“College students need to experience an active and living faith instead of dead religion,” he said. He wants them to “see who they are as a new creation in Christ because of what He has accomplished for them in His finished work on the cross, as opposed to just thinking Christianity is only something they do.”