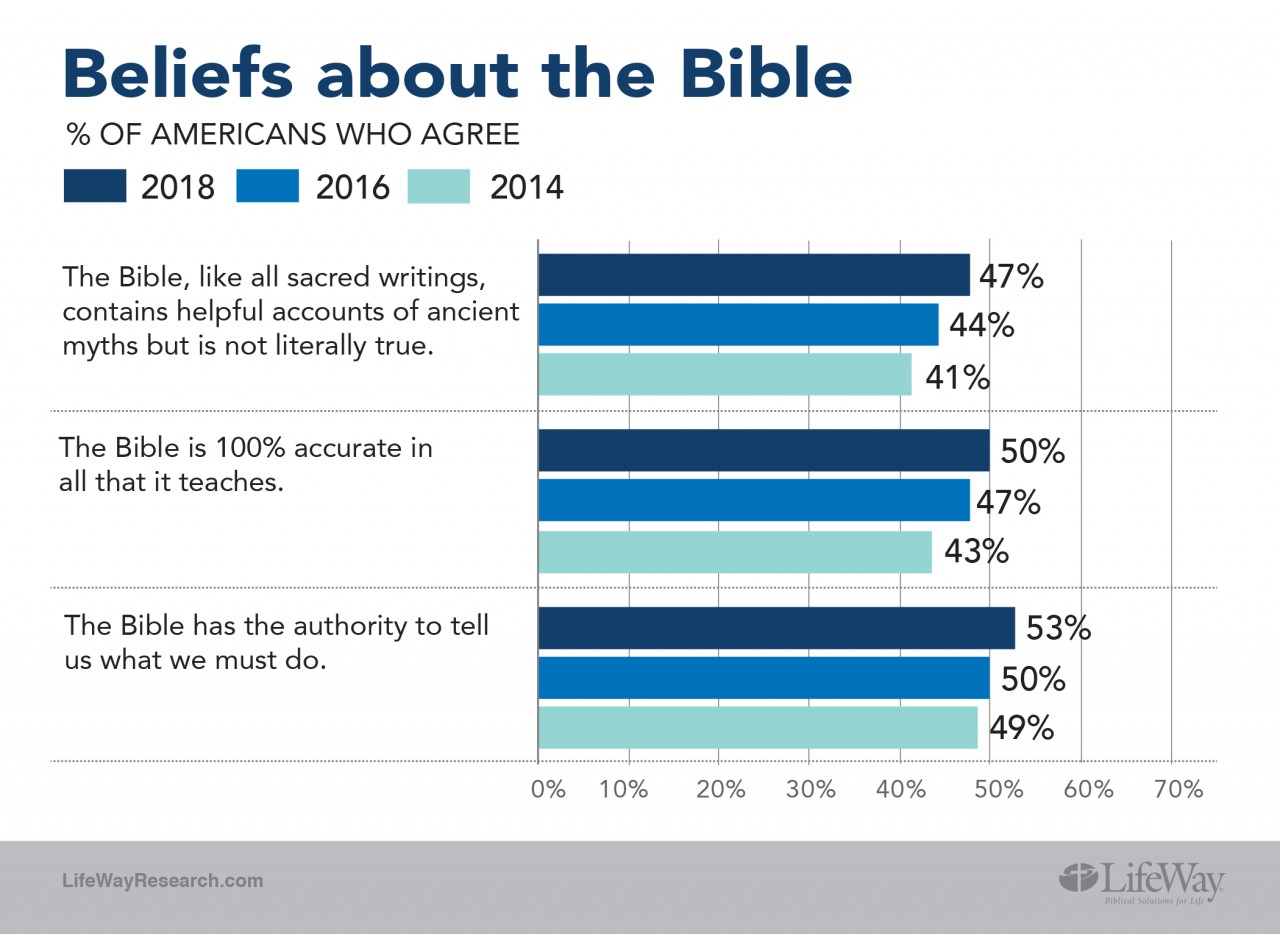 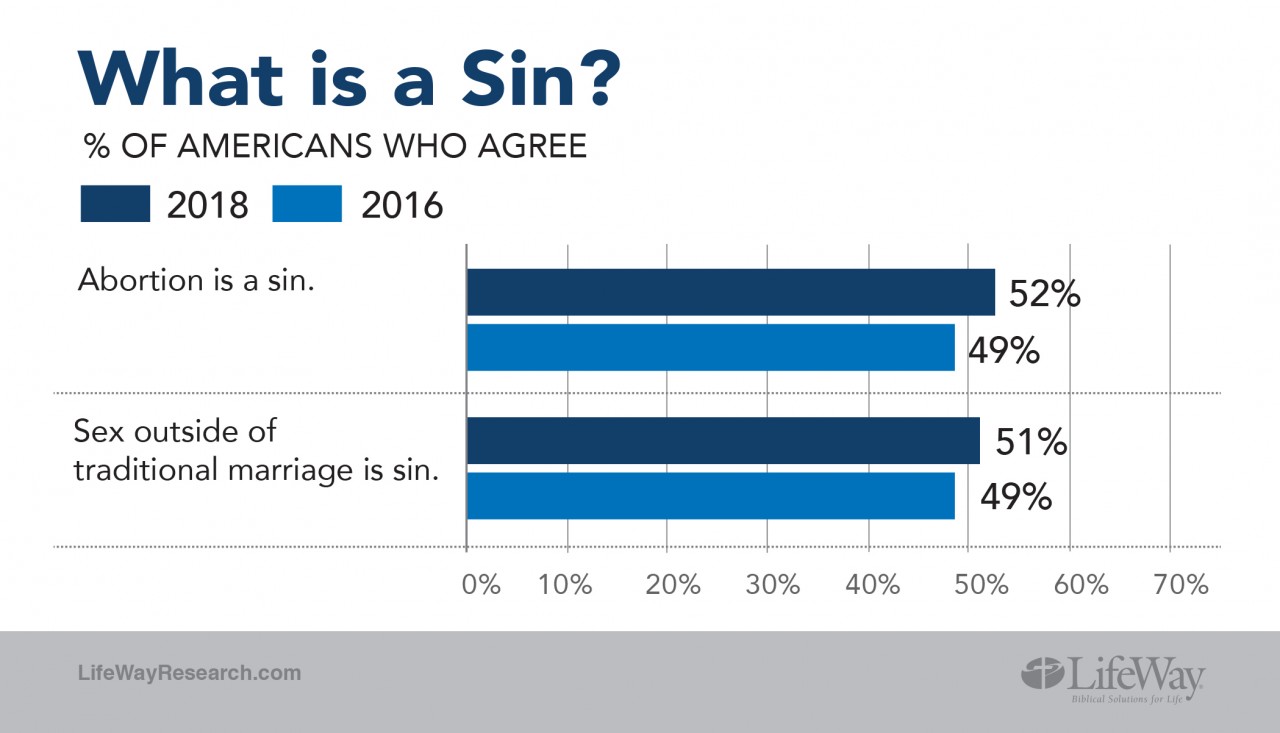 Those are among the findings of a new study of American views on Christian theology from Nashville-based LifeWay Research.

“When the majority of Americans believe religious belief is more personal opinion than objective truth, then we expect to see contradictory beliefs [as well as] beliefs that change over time,” said Scott McConnell, executive director of LifeWay Research.

The survey of 3,000 Americans was sponsored by Orlando-based Ligonier Ministries. Title the 2018 State of Theology Study, it is the third in a series of surveys examining Americans’ theological beliefs. Previous surveys were conducted in 2016 and 2014.

Survey questions focused on key doctrinal beliefs and included a number of areas where Americans often differ from historic and orthodox Christian views. Among the findings:

A majority of Americans (70 percent) believe there is one true God in three persons — Father, Son and Holy Spirit. Eighteen percent disagree while 12 percent are not sure. This has remained consistent since researchers began asking the question in 2014.

Sixty-nine percent of Americans say God is perfect and cannot make a mistake, which is higher than both the 2016 (65 percent) and 2014 (63 percent) surveys.

Two-thirds believe the biblical accounts of the physical (bodily) resurrection of Jesus are completely accurate. Twenty percent disagree; 14 percent are not sure.

Fifty-seven percent of Americans say Jesus Christ is the only person who never sinned; 29 percent disagree; and 15 percent are not sure.

A similar number say Jesus is a created being. Fifty-seven percent agree with the statement “Jesus is the first and greatest being created by God.” Twenty-eight percent disagree and 15 percent are not sure. That’s a slight increase from 2016 when 52 percent agreed Jesus was created by God.

Nearly 6 in 10 (59 percent) say the Holy Spirit is a force rather than a personal being. Twenty-five percent disagree; 16 percent are not sure.

A quarter of Americans (26 percent) say God is unconcerned with their day-to-day decisions; 61 percent disagree; and 13 percent are not sure.

Researchers found Americans are split on their views of the Bible. More Americans believe the Bible is completely accurate but a growing number say the Bible is not literally true.

“The last writing included in the Christian Bible was completed nearly 2,000 years ago,” McConnell said. “Yet Americans’ beliefs around this book are shifting more than most other theological beliefs.”

More than 6 in 10 Americans (62 percent) expect Jesus to return and judge all people. However, fewer expect people to be punished in a place called hell. While 54 percent of Americans agree hell is a real place where certain people will be punished forever, 30 percent disagree. 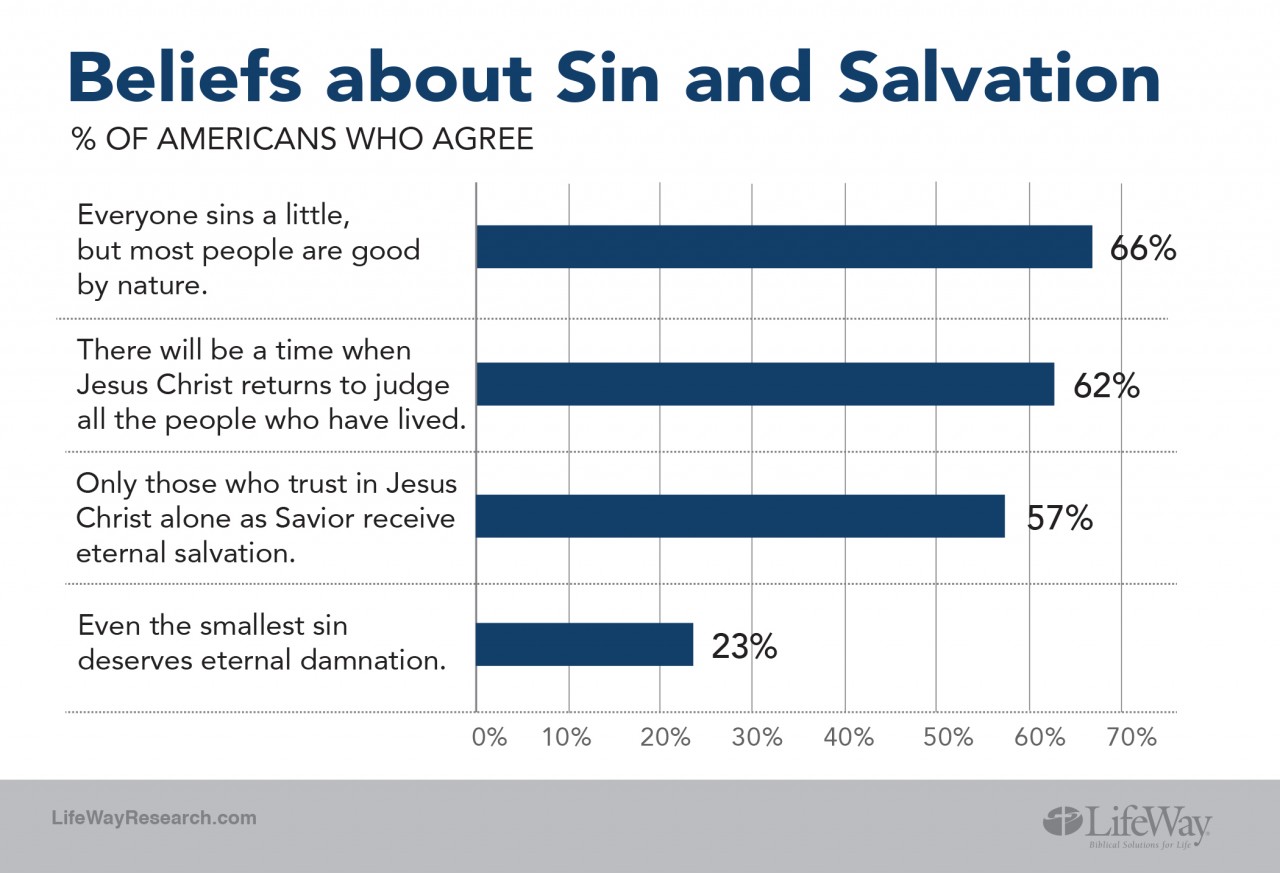 According to the study, a majority of Americans (66 percent) admit everyone sins a little, but most people are good by nature. Twenty-seven percent disagree and 7 percent aren’t sure.

Americans with evangelical beliefs are the most likely to agree (49 percent) that the smallest sin deserves eternal damnation.

A majority of Americans believe Jesus is the only way to eternal salvation. Six in 10 (62 percent) agree Jesus Christ’s death on the cross is the only sacrifice that could remove the penalty of sin from their lives. Thirty-eight percent disagree.

Fifty-seven percent of Americans say only those who trust in Jesus alone as Savior receive God’s free gift of eternal salvation. Forty-three percent disagree. Those who identify with an evangelical (88 percent) or black Protestant (83 percent) denomination are more likely to agree than mainline Protestants (65 percent) and Catholics (58 percent).

And slightly more than half (53 percent) believe righteousness comes only through faith in Jesus Christ not because of one’s actions. A third disagree while 14 percent aren’t sure.

Six in 10 (62 percent) Americans say the Bible is the highest authority for what they believe. Thirty-eight percent disagree. Americans from an evangelical (92 percent) or black Protestant (90 percent) denomination are more likely to agree than mainline Protestants (74 percent) and Catholics (67 percent).

Slightly more than half (52 percent) of Americans say abortion is a sin. Thirty-eight percent disagree while 10 percent are not sure.

Americans’ views of homosexuality continue to shift from historically orthodox Christian views. Forty-four percent believe the Bible’s condemnation of homosexual behavior doesn’t apply today. Forty-one percent disagree and 15 percent are not sure. In 2016, 42 percent agreed, while 44 percent disagreed and 14 percent weren’t sure.

LifeWay Research asked Americans about gender identity. The study found 38 percent believe it is a matter of choice while 51 percent say it is not a choice and 11 percent are not sure.

Nearly 6 in 10 Americans see valid alternatives to worshiping in a church with other believers. And more than a third say worship services should be entertaining if churches want to be effective.

Fifty-eight percent of Americans believe worshiping alone or with one’s family is a valid replacement for regularly attending church. Thirty percent disagree while 12 percent are not sure.

Americans with evangelical beliefs are more likely to disagree (54 percent) that worshiping alone or with family is a valid alternative to corporate worship.

“Church attendance has long been a measure of religious activity and devotion,” McConnell said. “Today, less than half of religious service attendees see regularly gathering for worship with other believers at church as essential.”

A demographically balanced online panel was used for interviewing 3,002 American adults. The surveys were completed April 24 – May 4, 2018. The sample provides 95 percent confidence that the sampling error from the online panel does not exceed +1.9 percent. Margins of error are higher in subgroups. Slight weights were used to balance gender, age, ethnicity, income, region and religion. Comparisons are made to studies conducted by LifeWay Research in 2016 and 2014 using the same methodology. Those with evangelical beliefs were determined using the National Association of Evangelicals and LifeWay Research evangelical beliefs research definition.

LifeWay Research is an evangelical research firm that specializes in surveys about faith in culture and matters that affect churches.