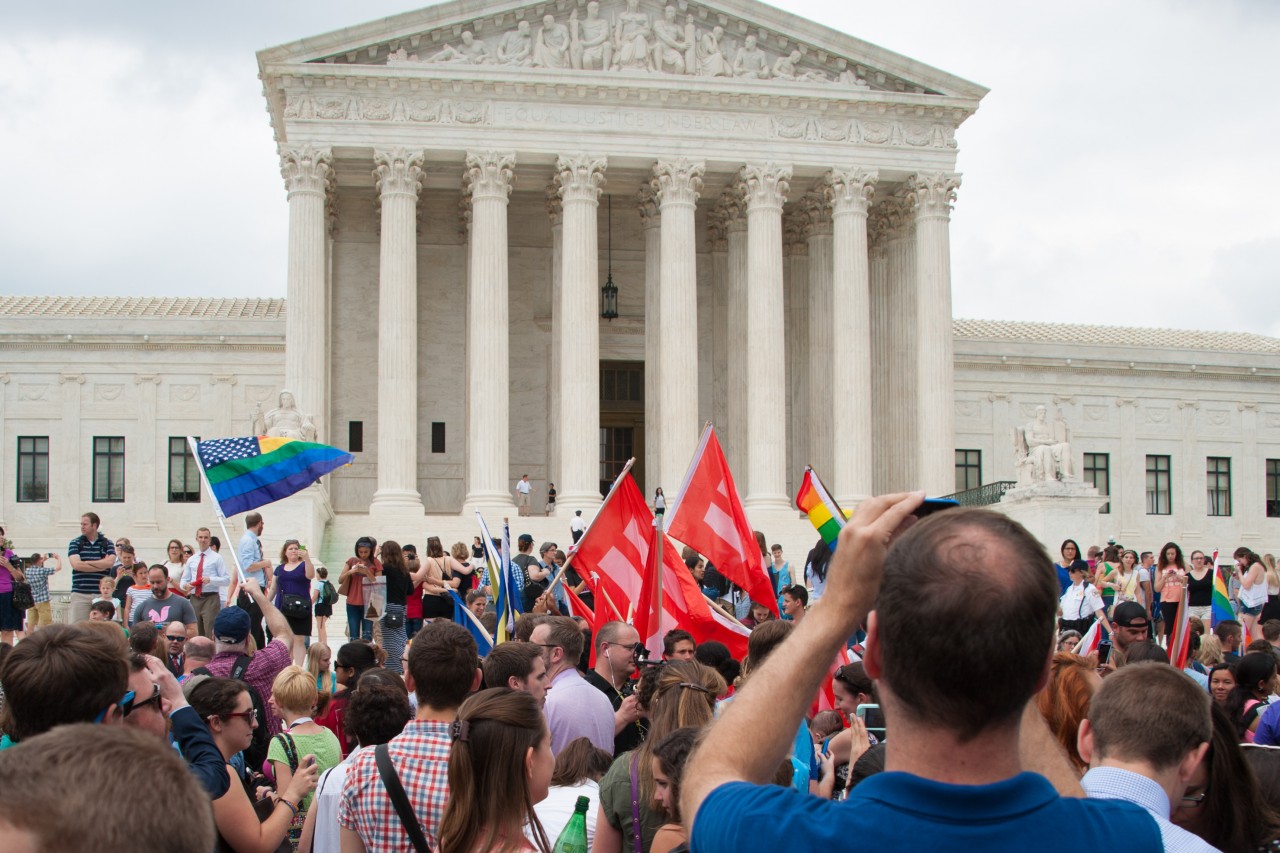 In a 5-4 decision, the high court ruled that states must recognize marriages between people of the same sex, providing a new definition throughout the country to an institution created by God as a covenant between a man and a woman.

Associate Justice Anthony Kennedy wrote the majority opinion for a deeply divided court, saying, “[T]he right to marry is a fundamental right inherent in the liberty of the person, and under the Due Process and Equal Protection Clauses of the Fourteenth Amendment couples of the same-sex may not be deprived of that right and that liberty.”

Southern Baptist leaders expressed dismay at the opinion but also sought to encourage churches to respond with courage and faithfulness.

“I deeply believe in biblical and traditional marriage. The court has determined otherwise,” SBC President Ronnie Floyd said in comments for Baptist Press. “This decision shows one thing: Our desperate need for the next Great Awakening and the hope of the Gospel given to all persons. We must rise up like never before with great urgency, to forward the message of Jesus Christ to every person in America and across the world.”

Russell Moore, president of the Ethics & Religious Liberty Commission (ERLC), said in a written statement, “I am a conscientious dissenter from this ruling handed down by the Court today, believing, along with millions of others, that marriage is the sacred union of one man and one woman and that it is improper for the Court to redefine an institution it did not invent in the first place.

“Despite this ruling, the church of Jesus Christ will stand fast. We will not capitulate on this issue because we cannot,” Moore said. “At the same time, now is not the time for outrage or panic. Marriage is resilient. God created it to be so. The church must now articulate and embody a Christian vision of marriage and work to rebuild a culture of marriage.”

With the ruling, religious freedom remained a major concern for Southern Baptist leaders and other defenders of biblical/traditional marriage, as well as some dissenting Supreme Court justices. The expansion of same-sex marriage into most states has resulted in a growing clash between “sexual liberty” and religious liberty, especially for florists, bakers, photographers and other business owners who have conscientious objections to providing their services for same-sex ceremonies. Many have been penalized by courts or commissions or are facing penalties.

In the majority opinion, Kennedy emphasized that “religions, and those who adhere to religious doctrines, may continue to advocate with utmost, sincere conviction that, by divine precepts, same-sex marriage should not be condoned. The First Amendment ensures that religious organizations and persons are given proper protection as they seek to teach the principles that are so fulfilling and so central to their lives and faiths, and to their own deep aspirations to continue the family structure they have long revered.”

“The majority graciously suggests that religious believers may continue to ‘advocate’ and ‘teach’ their views of marriage,” Roberts wrote. “The First Amendment guarantees, however, the freedom to ‘exercise’ religion. Ominously, that is not a word the majority uses.

“Hard questions arise when people of faith exercise religion in ways that may be seen to conflict with the new right to same-sex marriage — when, for example, a religious college provides married student housing only to opposite-sex married couples, or a religious adoption agency declines to place children with same-sex married couples,” the chief justice said. “Indeed, the Solicitor General [Donald Verrilli in oral arguments] candidly acknowledged that the tax exemptions of some religious institutions would be in question if they opposed same-sex marriage. There is little doubt that these and similar questions will soon be before this Court. Unfortunately, people of faith can take no comfort in the treatment they receive from the majority today.”

“In our society, marriage is not simply a governmental institution; it is a religious institution as well,” Thomas wrote. “Today’s decision might change the former, but it cannot change the latter. It appears all but inevitable that the two will come into conflict, particularly as individuals and churches are confronted with demands to participate in and endorse civil marriages between same-sex couples. The majority appears unmoved by that inevitability. It makes only a weak gesture toward religious liberty in a single paragraph. And even that gesture indicates a misunderstanding of religious liberty in our Nation’s tradition.”

Floyd and Moore expressed their discomfort about the state of religious freedom in the wake of the high court’s decision.

“Our #1 concern at this point is that religious freedom is protected in every way, honoring our God-given conscience, and that we not be discriminated against for our biblical and traditional stand,” Floyd wrote.

Moore said the court’s finding of “some illusory Fourteenth Amendment right to same-sex marriage will have wide-ranging and perilous consequences for the stability of families and for freedom of religion. In the wake of this decision, we must ensure that the American principles of pluralism and religious liberty are maintained, as the religious convictions of millions of Americans necessarily cause us to hold a different, more ancient, view of marriage than the one the Court has imposed.”

A broad evangelical Christian coalition organized by Moore released a statement June 26 declaring opposition to the high court’s decision and recommending ways the church should respond in the ruling’s aftermath. The recommendations included praying for government authorities as Christians seek to rebuild “a culture of marriage,” loving those who disagree and developing a “common culture of religious liberty.”

The Supreme Court majority’s support for legalizing same-sex marriage did not come as a surprise. Nor did Kennedy’s role in writing the majority opinion. It always appeared Associate Justices Ruth Bader Ginsburg, Stephen Breyer, Sonia Sotomayor and Elena Kagan would cast votes to confer marriage rights upon same-sex couples.

Kennedy’s opinion was the latest in a series that observers predicted would find its logical conclusion in the legalization of gay marriage. Kennedy wrote for the majority in 2003 when the court legalized same-sex relations. In 2013, Kennedy’s opinion struck down a section of the federal Defense of Marriage Act, saying it violated “equal protection” under the Constitution by refusing to recognize same-sex marriages.

In his June 26 opinion, Kennedy said the high court’s past decisions offer four principles for the fundamental right to marry to apply to same-sex couples:

— “[T]he right to personal choice regarding marriage is inherent in the concept of individual autonomy.

— “[T]he right to marry is fundamental because it supports a two-person union unlike any other in its importance to the committed individuals.

— “[I]t safeguards children and families and thus draws meaning from related rights of childrearing, procreation, and education. … Without the recognition, stability, and predictability marriage offers, their children suffer the stigma of knowing their families are somehow lesser.

— “[M]arriage is a keystone of our social order.”

“Under the Constitution, same-sex couples seek in marriage the same legal treatment as opposite-sex couples, and it would disparage their choices and diminish their personhood to deny them this right,” Kennedy wrote.

In concluding his dissent, Roberts encouraged advocates for same-sex marriage to celebrate their achievement, adding, “But do not celebrate the Constitution. It had nothing to do with it.”

Each of the four justices who disagreed with the majority wrote a dissenting opinion, an uncommon event. Antonin Scalia and Samuel Alito were the other associate justices to dissent.

Other than the right to marry, the high court’s June 26 decision did not appear to grant increased liberties to lesbian, gay, bisexual and transgender people, though LGBT and same-sex marriage advocates praised the court’s ruling.

Evan Wolfson, president of Freedom to Marry, described the decision as “a transformative triumph decades in the making, a momentous victory for freedom, equality, inclusion, and above all, love.”

“Today’s win is the culmination of a decades-long campaign that successfully made the case in the court of public opinion, enabling victories in the courts of law,” Wolfson said.

Frank S. Page, president of the SBC Executive Committee, meanwhile lamented, “Our hearts are saddened to hear of the Supreme Court’s decision to ignore the desire of the American people, to ignore legislative processes and most of all to ignore God’s clear and unambiguous word.

“If there was ever a time when we need believers to be salt and light it is now,” Page said. “God help us all, but especially our children and grandchildren.”

Same-sex marriage already was legal in 37 states and the District of Columbia. Court rulings had produced legal gay marriage in more than two-thirds of those states before the justices’ opinion expanded it to all 50 states.

The court’s opinion came in a case, Obergefell v. Hodges, from the Sixth Circuit Court of Appeals. In a 2-1 decision in November, the court –- based in Cincinnati — ruled states have the authority to define marriage as only between a man and a woman. The opinion came in challenges to laws in Kentucky, Michigan, Ohio and Tennessee –- states where voters approved constitutional amendments between 2004 and 2006 that limit marriage to a man and a woman.
Rena Schild / Shutterstock.com