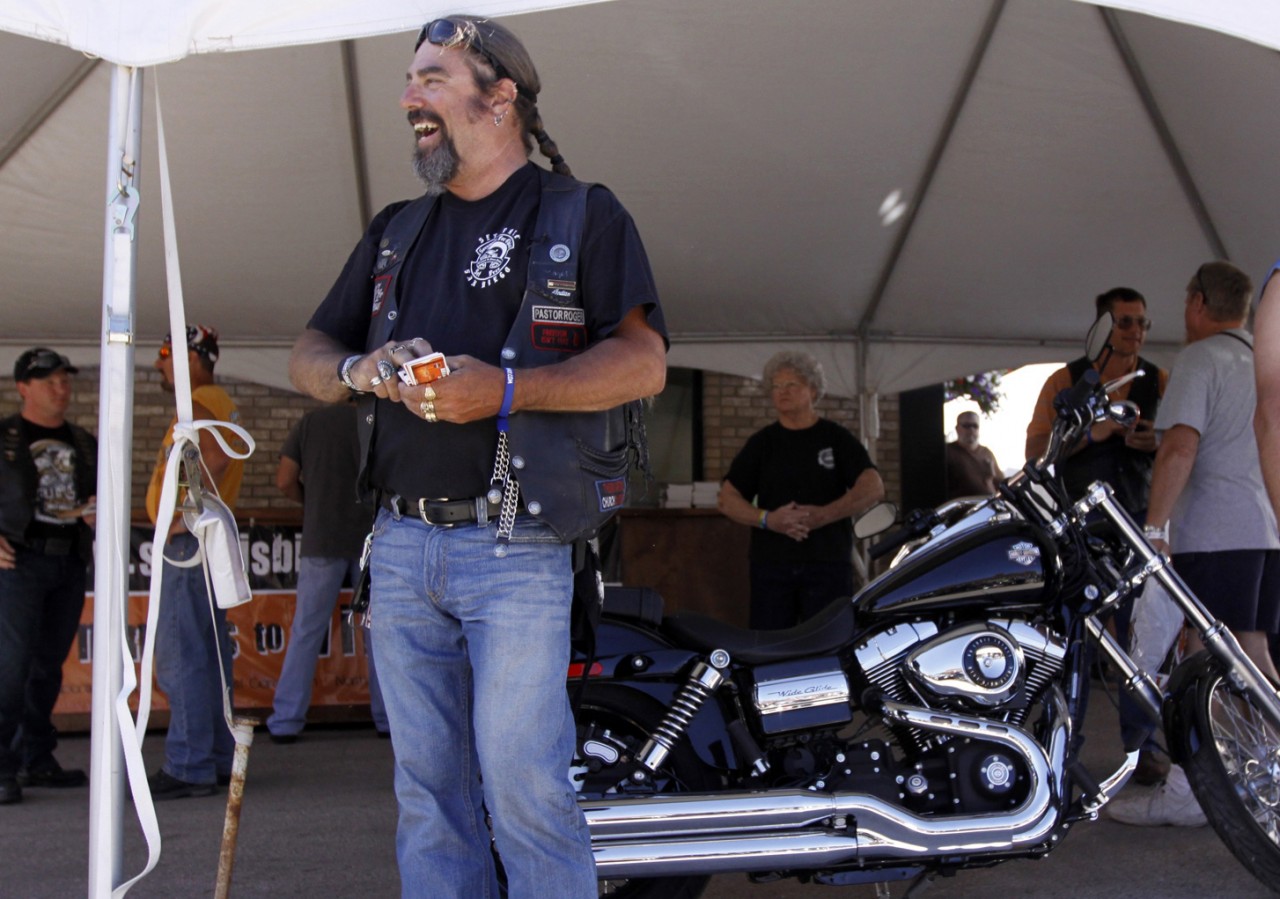 RAPID CITY, S.D. (BP) — The Sturgis Motorcycle Rally in August will be the final time the Dakota Baptist Convention will host its annual evangelism thrust that began at the iconic biker gathering in 2006.

But the outreach will continue. 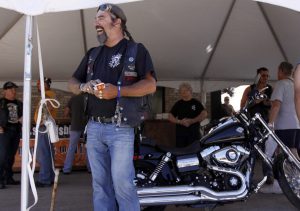 At the 2010 Sturgis Motorcycle Rally, South Dakota pastor Roger Persing encourages passersby to hear a three-minute testimony for a chance to win a new Harley. Persing died of cancer two years later. Leadership of the annual outreach by the Dakota Baptist Convention will move to the F.A.I.T.H. Riders ministry in 2020. BP file photo

In 2020 and beyond, it will be led under the direction of F.A.I.T.H. Riders, a national Christian motorcycle ministry.

“I am excited about F.A.I.T.H. Riders taking leadership of the Sturgis evangelism ministry,” DBC Executive Director Garvon Golden told Baptist Press. “They have a source of volunteers nationwide who can pick this ministry up and carry it into the future.”

About a half-million motorcyclists, wannabes and gawkers attend the Sturgis Motorcycle Rally in the Black Hills of South Dakota each year in what some say is the largest event of its kind in the world. The rally was birthed in 1938 with nine participants and a small audience by the then-new owner of the Sturgis Indian motorcycle franchise.

When Jim Hamilton was called in 2003 as the newly-formed Dakota Baptist Convention’s first executive director, he brought an interest in motorcycling and evangelism, and led the staff into doing “something more than just hand out water” at the annual event known simply as “Sturgis.”

Hamilton had seen Texas evangelist Ronnie Hill pair a three-minute evangelistic witness with the chance to win a prize, and decided to offer the possibility of winning a new motorcycle in a drawing for people who listened for three minutes to someone tell how God had changed his or her life.

With financial support provided by the Georgia Baptist Convention, North American Mission Board and other partners, and Hill training volunteers to share their faith in three minutes, the Sturgis evangelism ministry started in 2006.

Each decision has been followed up in the subsequent weeks and months, and some of them for 10 to 12 years. Other facets of the ministry include prayer that starts in October each year for the coming year’s event, culminating in 20 days of focused prayer leading up to the first week of August when the seven-day Sturgis Motorcycle Rally begins.

“We’ve become convinced God has anointed this ministry,” Golden says on a 2018 video attached to SturgisBikeGiveaway.com. “We’re looking forward to what God is going to do with this ministry in the future.”

Golden sent a letter to the state convention’s 90 churches in early March and posted it to Facebook explaining the thinking behind the staff’s decision to discontinue the ministry after 2019.

The financial resources from NAMB for the Sturgis evangelism event “need to be invested in helping our local churches in doing evangelism in their local communities,” Golden wrote.

“While the motorcycle ministry has been a national ministry with involvement from volunteers across the nation, the truth of the matter is that involvement from Dakotans has been minimal and the impact of this ministry on our own churches and their evangelism has been minimal as well,” Golden recounted. “It is time to invest our resources in evangelism activity that will have a greater impact on reaching Dakotans for Christ and that will impact our local churches on a year-round basis.”

Also, the Sturgis event takes an inordinate amount of time, energy and attention from the state convention staff, and “it is time for our staff to focus our energy and time that has been devoted to the rally ministry to be focused on our churches, pastors and leaders in the Dakotas.”

A week after Golden sent the letter, F.A.I.T.H. Riders offered to take responsibility for the ministry. After volunteering at Sturgis for five years and learning the “Sturgis model” of evangelistic witnessing, F.A.I.T.H. Riders, which started in 2002 at First Baptist Church in Lakeland, Fla., started a similar ministry at the Daytona Motorcycle Rally.

“We minister to a demographic of America most people wouldn’t speak to,” F.A.I.T.H. Riders’ national director Mike Stewart told Baptist Press. “Sturgis and Daytona are the two largest motorcycle rallies in the world. They’ll be keeping us busy for the next year or two.”

“Sturgis was just a burden God placed on my heart, that we weren’t reaching people in our backyard,” Jim Hamilton told Baptist Press about his thinking in 2004. Now serving in Alaska as executive director of Arctic Barnabas Ministries, Hamilton said he is glad F.A.I.T.H. Riders will be leading the motorcycle ministry.

“The Dakota Baptist Convention has to do what they think is God’s best for Dakota,” Hamilton continued. “F.A.I.T.H. Riders taking over the Sturgis evangelism event will be very productive for the Lord. The truth is that F.A.I.T.H. Riders is not only the logical choice for Sturgis but the right choice, the best choice … to provide a Gospel witness in a place that desperately needs it.”

To pray or volunteer for or donate to the Sturgis evangelism event this Aug. 2-10, see SturgisBikeGiveaway.com.