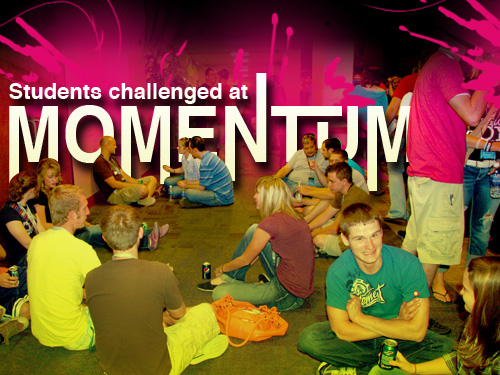 MOORE—As a new school year gears up, more then 1,100 college students from across the state gathered at Moore, First Sept. 9 to be reminded of their obligation to be witnesses on their campuses.

“We want them to get their lives going in the right direction, love Jesus above all and impact their campuses with the Gospel,” Strappazon said.

The five-hour meeting featured opportunities to renew friendships, music from the Jeff Johnson Band and challenges from Afshin Ziafat, a converted Muslim, who is now pastor of Providence Church in Frisco, Texas.

Also speaking briefly was Kelly King, BGCO women’s missions and ministries specialist, who informed the students of the problem of human trafficking in Oklahoma.

King said a couple of years ago, she received an email from a man she didn’t know inviting her to attend a discussion on human trafficking.

“I knew it was going to be a critical issue as well as a focus for Woman’s Missionary Union, so I attended the meeting,” King said. “I was the only representative from a faith-based organization.”

King admitted she knew human trafficking was bad overseas, but didn’t realize the impact it has on Oklahoma.

“It is the second largest criminal activity in the world behind the drug trade,” she revealed. “A person created in the image of God can be abused over and over and money continuously made from that. And because of the underground nature of human trafficking, it is hard to control.”

Oklahoma, being the intersection of I-35 and I-40, as well as I-44, makes it a prime spot for trafficking, she indicated.

“One, be informed,” she urged. “Look around you at truck stops. Look for young girls lingering around and engage them in conversation. And be educated on the dangers of human trafficking.”

She also told the students to be holy, because one of the entrances into human trafficking is pornography.
“And pray for victims,” she said. “Pray for those you don’t even know. When you get dressed, look at the labels in your clothing, and pray for the people in that country, many of whom may be victims.”

King said college girls can be mentors to younger girls, and college students can think about careers as lawmakers and law enforcers.

Ziafat encouraged the students to live their lives in such a way that the Gospel won’t stop with them, but will go out in waves that they will never be able to see.

“When the Gospel intersects your life, it isn’t meant to stop with you,” Ziafat explained. “If you want to outlive your life, there are at least five things you must do.”

One, he said, is to understand the Gospel.

“If you truly understand the Gospel, it will send you out,” he said. “It will be fuel for mission in your life.”

Second, receive the Word of God in such a way that it makes no sense except that God said it, he noted.

“Be led by the Word of God,” he challenged. “Pay careful attention to it as a light shining in the darkness. Don’t make plans for your life without consulting God.”

He pointed out that a life dedicated to God leads to sacrifice.

“You have to let go of your dreams,” he said. “Be mindful of the things of God rather than the things of man. The greatest gift you have came because God denied the request of Jesus for the cup to pass from Him before he was crucified.”

“You show the world that Jesus is more important than anything,” he said. “Then suffering becomes an opportunity.”

And finally, let your faith speak, he admonished.

“When you understand your life can be used for others, you will discover true joy.”

Ziafat also told the students that God is praying they will be sent into the world as ambassadors for Christ.

He said a Christian ambassador should pray, love and serve those in his life who don’t know Jesus, and share the Gospel with them.

“Prayer is the beginning of evangelism,” he proclaimed. “When you pray, your heart aligns with God’s heart for the unsaved.”

He recalled that he had a second grade tutor who loved and served him.

“She taught me English and gave me a Bible,” he noted. “The only reason I kept the Bible was because she gave it to me.”

Ziafat said Sept. 11 is a great time to love Muslims because they will assume everyone is going to hate them.

“Salvation is from God, but He has chosen to use you to guide people to Christ,” he said. “You don’t have to know all the theologies in the world to share the Gospel, but you do have to know Jesus.”