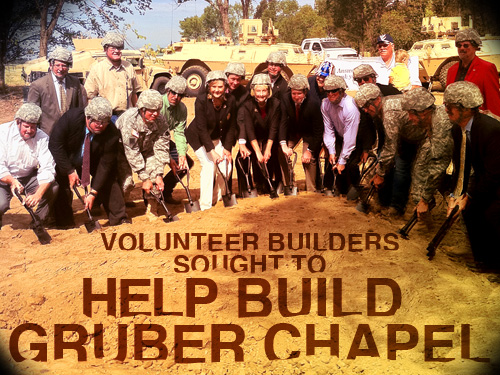 Oklahoma Baptists with construction skills at any level have the opportunity to be a part of history by volunteering beginning in October to help construct Thunderbird Chapel at Camp Gruber near Braggs.

“We want any Oklahoma Baptist man or woman who is interested in helping with volunteer construction to come to Camp Gruber to assist in this noble effort,” said Sam Porter, partnership and volunteer missions specialist with the Baptist General Convention of Oklahoma (BGCO).

“Also, we need many more Oklahoma Baptists to join our volunteer builders’ group, and this will be a unique way to see first-hand how it works.”

The Oklahoma Baptist Builders Fellowship is a group of Oklahoma Baptists dedicated to using their skills and abilities in construction for the cause of missions in Oklahoma, in the United States and abroad.
Its purpose is to help those Southern Baptist churches with a building project where there are adequate resources for the cost of materials, but not for the cost of labor. The mission of the Fellowship is to provide such labor. Membership is open to Christian men and women who are active members of a local Southern Baptist church.

Ground was broken for the Thunderbird Chapel on Sept. 7 by several dignitaries, including Oklahoma Gov. Mary Fallin, who announced a fund-raising drive for the structure on Aug. 9. The 10,500-square-foot structure, with an auditorium that will seat about 200, is estimated to cost more than $1 million.

Various companies in the state are donating materials and services, but about $500,000 is still needed to buy furnishings and supplies for the 10,500-square-foot building, Fallin said. Money is needed for such things as pews, sound equipment, worship linens, sacristy items, baptismal robes, wedding candle stands, office furnishings, stained glass and musical instruments.

According to Col. Mike Taylor, chaplain for the Oklahoma Army national Guard, Camp Gruber is one of the few National Guard military training facilities in the nation that doesn’t have a chapel.

Taylor, who formerly was a church planting strategist with the BGCO, said almost 150,000 soldiers are trained at Gruber annually.

The building will be called Thunderbird Chapel after the former 45th Division’s insignia of a thunderbird, which is an American Indian symbol meaning sacred bearer of unlimited happiness.

In addition to those Baptist volunteer builders who will be involved, Porter said Baptist disaster relief feeding team volunteers will prepare three meals a day for all of the volunteers working at the site throughout the duration of the construction.

The work is scheduled to begin Oct. 28. Volunteer workers are to be coordinated through World Mission Builders, and are expected to have the exterior of the chapel erected in two weeks.

Fallin said she wants the chapel completed by April, when many of the 45th Division’s soldiers will be returning from deployment to Afghanistan.

Workers should be able to finish the interior work and have the chapel ready by the governor’s deadline, said Gerry Shepherd, president of Oklahoma Roofing and Sheet Metal, who is donating material for the chapel’s roof and coordinating donations from other trade companies and builders.

Porter said adequate housing for volunteers will not be a problem, since there are barracks with sleeping quarters for 120 men and 40 women at the camp. Volunteers also will be permitted to bring their own RVs to sleep in as well, he added.

“We will have items and or supplies listed on the BGCO website volunteers will need to bring,” Porter said, adding that “everyone wanting to serve MUST make reservations because Camp Gruber is an active military base. The BGCO Volunteer office will give the security gate a list of volunteers each day so those volunteers will be allowed to gain entry.”

Porter added that he hopes to have 75-100 Baptist volunteers on the chapel site each day. For further information, visit www.bgco.org/volunteer missions.

Camp Gruber was established in 1942 as a military mobilization training post in the Cookson Hills area of Muskogee and Cherokee counties in eastern Oklahoma. For the duration of World War II, Camp Gruber provided training to the infantry, artillery and tank destroyer units that went on to fight in Europe. Until 1946, Gruber was also home to a POW camp housing 3,000 German prisoners and employing 4,000 civilian workers.

When Camp Gruber was originally built in the spring of 1942, it featured 1,731 framed buildings that housed barracks, administration buildings, hospitals, a laundry, mess halls, theaters and other services. Of those buildings, 14 were chapels available to soldiers and personnel of all faiths.

Following Camp Gruber’s deactivation in June 1947, most of the existing structures were destroyed or moved to other locations. The camp was reactivated in 1977, and although many new buildings have been constructed in the years since, Camp Gruber has remained without a chapel.

The vision for the Thunderbird Chapel at Camp Gruber is centered around the concept of serenity. The building will be designed to resemble an historic chapel structure.

Located in a wooded area that will provide easy accessibility for soldiers, Thunderbird Chapel will feature a sanctuary and facilities to accommodate services for 150-175 soldiers, as well as offices for clergy and counseling and areas to conduct seminars, religious studies and other gatherings that benefit the lives of soldiers and their families.

For more information on the efforts to build the chapel at Camp Gruber, including how to donate, go to www.thunderbirdchapel.org.