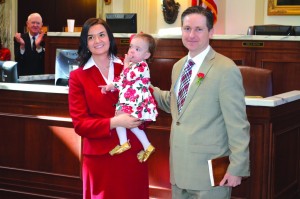 The event was promoted as the 25th year since Oklahoma Baptists have been supporting Rose Day. The Oklahoma State Capitol was the usual location for the single largest gathering of pro-life Oklahomans on Feb. 3, as 750 individuals and families registered and more than 1,000 participants from across the state walked the halls to offer roses to their legislators and encourage them to support pro-life bills.

During the rally program, participants met in the House of Representatives Chamber, as well as in overflow locations, including the Senate Chamber, and heard multiple stories of children who were born under unique and challenging circumstances, yet all under God’s provisions. 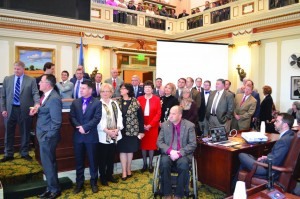 Many pro-life state representatives and senators were recognized during the rally  (Photo: Chris Doyle)

A testimony by Brian Hobbs, Baptist Messenger editor, told how his youngest daughter Violet was born at 24 weeks, weighing 14 ounces. Photos were shown of baby Violet’s progress in her physical growth, and then rally attendees had the blessing of seeing the 19-month-old as her mother Jennifer brought her out to join Brian on the chamber floor.

Keynote speaker Anthony Jordan, executive director-treasurer of the Baptist General Convention of Oklahoma, gave an inspiring story of how he and his wife Polla adopted both of their children. Their son Adrian is a church planter in Portland, Ore., and their daughter Alisha is a girls youth minister at Oklahoma City, Quail Springs. Both Adrian and Alisha were born in crisis pregnancies to mothers who were unable to care for them.

“We had the privilege of adopting them,” Jordan said about Adrian and Alisha, “and today they are our son and our daughter, not aborted but given life.”

Jordan also spoke historically how challenging it was to get state officials to even consider pro-life laws. But today, Jordan said, Oklahoma has pro-life legislators, as well as a governor, a lieutenant governor and an attorney general who value sanctity of life in their rulings, and Jordan gave much of the credit for the pro-life change to the influence of the many years of Rose Day participants.

“Sometimes I have people say to me, ‘Well, is Rose Day really making a difference?’” he said. “’I mean do you all just come out there and speak to yourselves and go on about your way?’ Have these 25 years really brought us to a different place than where we were back then? I want to say to you unequivocally, as clearly as I know how to speak ‘Yes, and a thousand times yes!’ Rose Day has made a difference.” 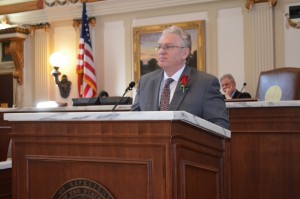 Jordan also drew many cheers when he mentioned Americans United for Life, the nation’s oldest pro-life organization, declared Oklahoma the number-one pro-life state in the country.

“I must tell you our job is not done,” he said. “It is not done until every unborn child in Oklahoma has the inalienable right, given by our government, but more importantly has the right that our God has given us—a God Who sees life as sacred, a God Who has spoken clearly. We do not have to wonder what God thinks about the unborn child. He has told us. We have a job to do. We cannot quit.”

Other stories of hope were told by State Rep. Lisa Billy, who served as emcee of the Rose Day pro-life rally, and Gov. Mary Fallin. Billy shared about her pregnancy experience of carrying her son at 22 weeks and the physician telling her they needed to terminate the pregnancy. Both Billy and her husband told the doctor they are choosing life for their son. 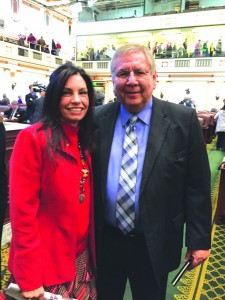 “By the way, that 22-week-old child that they wanted me to terminate before I reached 24 weeks, he’s an 18-year-old strapping 6-foot-2… good-lookin’ young man, a freshman in college who is going to serve in the United States Army,” said Billy.

During Fallin’s speech, the governor called her son and put him on speaker for everyone to hear their conversation, unbeknownst to him. After she hung up, she began to share the experience of her pregnancy with her son.

Fallin said she was running for state legislature, and two months into her campaign, she found out she was pregnant. She faced criticism for continuing to run for office while she was pregnant. 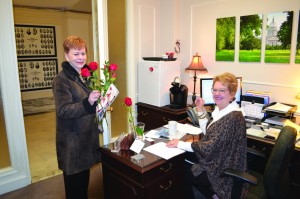 “I had him between the primary and the general election,” she said to the response of laughter and applause. “Yes I am a follower of Jesus and knew what was the right thing to do, and now I have this wonderful 25-year-old son who is going to shoot me when he gets home tonight because he will be embarrassed when I tell him what I just did to him. But of all the joy that I would have missed out, all the wonderful memories I have of both of my children—to think that anybody would want to get rid of a child because it’s not convenient.

“Thank goodness we live in a state that values the culture of life; that has people like you who are willing to come from all over the state, spend your time coming to talk to your legislators, your elected officials and show the public when they see this on the news tonight that we had a big pro-life Rose Day at the Capitol, that Oklahoma stands for life,” Fallin said to the rally attendees who cheered loudly when she said she has signed every pro-life bill that has come to her desk. “It wouldn’t have happened without you, and God continues to bless you. Thank you for your tremendous work. Thank you for Rose Day, and thank you for coming here to support the culture of life.”