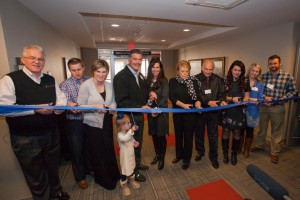 DAVIS—Celebration, appreciation and thankfulness to God were the theme of the day Feb. 2 as Baptist General Convention of Oklahoma (BGCO) Board members, staff, donors and friends gathered at Falls Creek Baptist Conference Center to celebrate “God Did It Through Us” in providing $55 million in improvements at the encampment.

As the Board gathered for its regular February meeting, the festivities included dedication and ribbon cutting ceremonies for the 50-room Thompson Family Lodge, Mathena Family Event Center and “Downing Way,” a landscaped walkway which ties the camp’s campus together.

The largest building addition, the Mathena Family Event Center which was entirely underwritten by the Mathena family, is a multi-use facility that features multiple, customizable meeting spaces, a large hall with state-of-the-art audio visual equipment, and a commercial-style kitchen that can accommodate formal dining for thousands of guests. The unique, monolithic architecture also boasts a major benefit to the Conference Center and its guests. 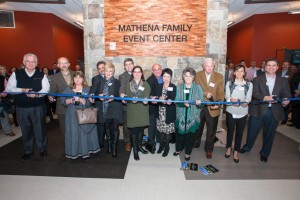 The four-story Thompson Family Lodge which was entirely underwritten by the Thompson family, which rivals any upscale accommodations, links the event center to the Jordan Welcome Center, which now serves as the “front door” to the conference center, and opens the door to Falls Creek operating as a year-round conference center serving groups of all sizes and all ages.

Downing Way is a lighted, landscaped concourse with three walkways providing access from the Raymond A. Young Tabernacle to the event center, the Wynn Center for World Missions and other areas of the campground.

Members of the Mathena, Thompson and Downing families were present to participate in the dedication and ribbon cutting ceremonies for their particular structure or area. The Downing family’s $2.3 million matching gift enhanced giving opportunities related to the Falls Creek Centennial Campaign.

During lunch, Jordan thanked God for His provision through Oklahoma Baptists in providing $55 million since 1999 to pay for the improvements at Falls Creek. 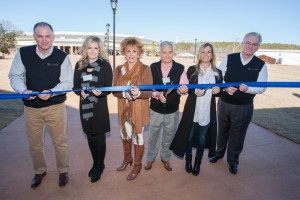 He also announced that with gifts in hand and when pledges have been paid, the debt on the Tabernacle has been eliminated.

“I do not know how to express to our God how awesome, how amazing, how incredible He is,” he said.

“And, I don’t know why our God chose to place His grace and mercy and faith in the old Arbuckle Mountains of Oklahoma in a little dusty place called Falls Creek.

During the plenary session in the afternoon, the Board approved three significant items of business, including a $25.5 million Cooperative Program objective for 2017; a 2017 Edna McMillan State Missions Offering and Allocations Goal of $1.1 million and a three-year partnership with the city of Edmonton, Alberta, Canada beginning immediately (See related story on page 5). 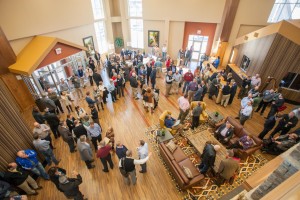 Guests and BGCO staff gathered in the lobby of the Jordan Welcome Center before the festivities began (Photo: Austin Urton)

In other business the Board:

• Approved a recommendation by the Executive Committee that Norma Lee, a member of McAlester, First Indian be elected to complete the two-year unexpired term of LeRoy Sealy on the BGCO Board of Directors.

• Approved a recommendation by the Executive Committee for the Baptist Foundation of Oklahoma, Baptist Village Communities (BVC) and Oklahoma Baptist Homes for Children governing documents to include a statement of faith declaring the Bible as the foundation for their faith and practice, and affirming as their confession of faith, the Baptist Faith and Message, as revised and adopted in 2000 by the Southern Baptist Convention, be affirmed. (Oklahoma Baptist University has placed this statement in their faculty and employee handbooks). 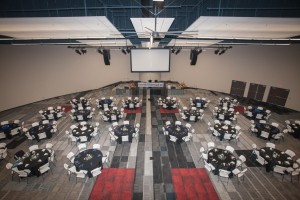 BGCO Board members, donors and honored guests enjoyed lunch and a program in the main auditorium in the Mathena Family Event Center. (Photo: Austin Urton)

• That the BVC president be authorized to explore and implement management agreements with other not-for-profit senior living organizations in Oklahoma.

• Approved a recommendation by the Finance Committee that the BGCO staff prepare a proposal for presentation at the May Board meeting regarding moving to medical self insurance.

The next meeting of the BGCO Board will be May 17 at the Baptist Building in Oklahoma City.