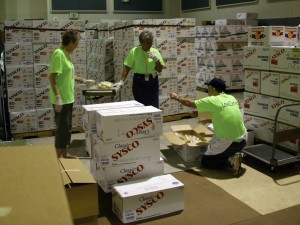 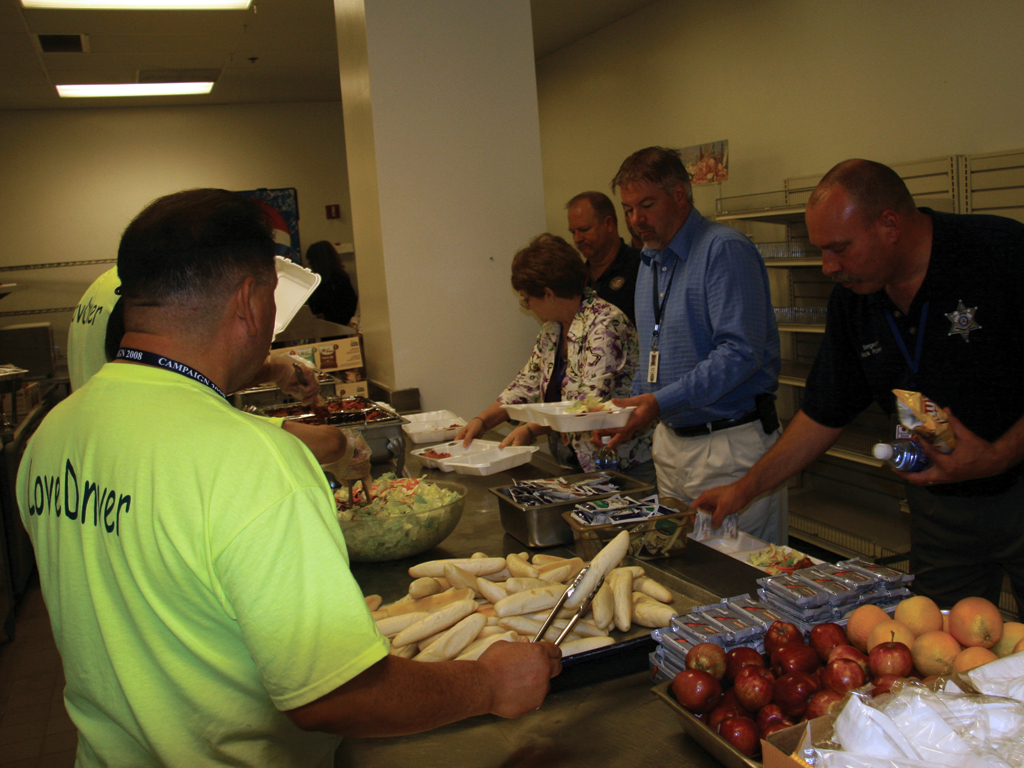 The well-dressed lady asked her question again while weaving through the line of government officials juggling plates of food, bottles of water and fruit.

“Well it was gooood!” she commented as she grabbed an apple and headed back to her post at the Federal (Command) Center in Denver.

“Another satisfied customer,” chuckles Sam Porter as the story is related to him later. Porter, director of the Baptist General Convention of Oklahoma’s disaster relief program, is pleased Colorado Baptists are receiving the credit for the up to 6,000 meals each day the Oklahoma Baptist disaster relief volunteers prepare for more than 3,000 local, state and federal law enforcement agencies providing security for the week-long Democratic National Convention. Fifty-two different agencies are represented.

Titled “Love Denver,” the Mile High Association, in cooperation with Colorado and Oklahoma Baptists’ disaster relief units, mobilized more than 600 local church volunteers to serve meals in 12-hour shifts around the clock. Never before had the association attempted something so massive. Twenty-four trained Oklahoma Baptists were asked to assist the smaller in size Colorado program.

The request for Oklahoma Baptists to help with Love Denver seemed unusual to Porter at first. 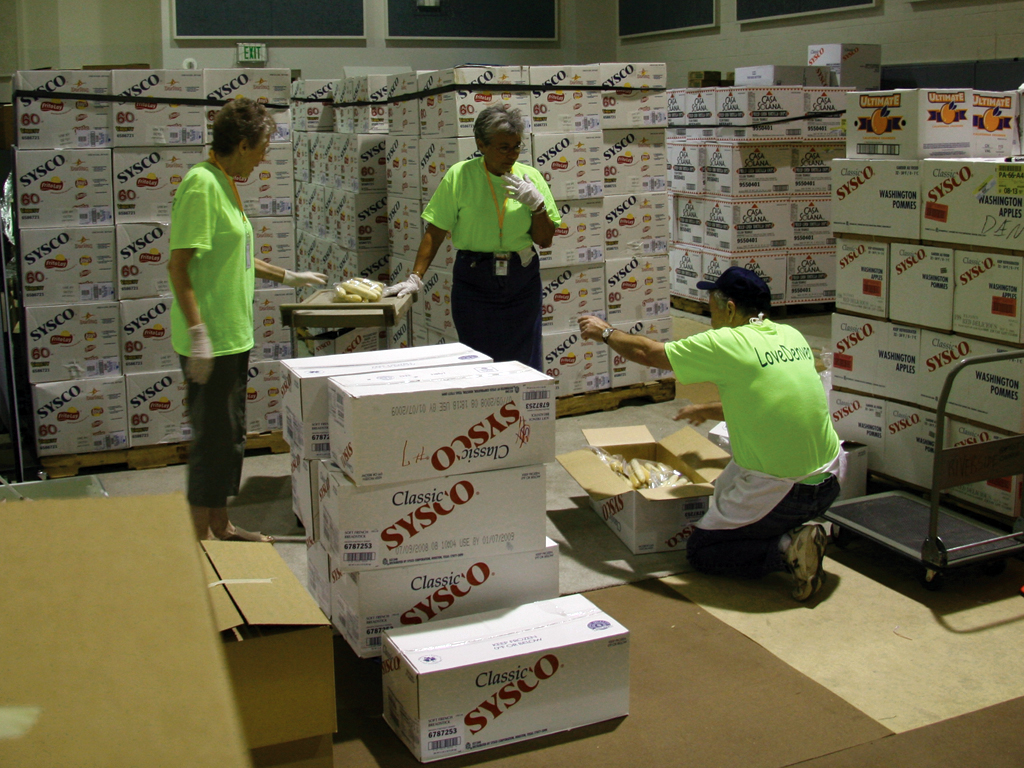 “Typically, we would not participate in something that is really more or less a catering function,” he said, “But with our new 53-foot kitchen scheduled to be ready the week before the convention, we knew it would be a good ‘test run’ for it.”

Then Porter learned of the real reason Oklahoma Baptists could not say no-federal officials were preparing for riots similar to those at the Democratic convention in 1968. Riot detainees would need to be fed, too. And as always, the possibility of another terror attack loomed overhead. A stadium filled with 75,000 people, including the democratic presidential nominee and half of Congress is an inviting target for anyone bent on harming America.

From the time the disaster relief units pull into a parking lot, it only takes 8 hours until 20,000 meals are ready to be served.

“Since we’re already set-up, we can go from 6,000 to 20,000 meals in about three hours,” said Rusty Gilbert, disaster relief volunteer and member at Bethany, First.

The call to feed riot detainees never came. The earliest and largest of the planned protests, in opposition to the Iraqi War, fizzled when less than 1,000 of the anticipated 20,000 protesters actually participated. By the second day of the convention, police opened half of the streets originally closed for the remaining planned protests. But the announcement that three armed men planning to assassinate Barrak Obama had been arrested in nearby Aurora did nothing to reduce the Mile High City’s tension.

Prostitutes, Police and the Lord

Oklahoma Baptist’s willingness to prepare the meals allows Mile High Association Team Leader, Bob Ryan, to be free to address problems and opportunities as they arise. When security needs change, feeding locations and the number of meals required changes as well. “Logistics are a continual challenge,” Ryan said.

Then there are the prostitutes. There are an estimated 4,000 prostitutes in Denver for the DNC.

“I didn’t believe the number when I first heard it,” Ryan reported, “Then a second official told me the same number.”

Ryan immediately put A Way Out Ministries on standby. If that many prostitutes were going to be in Denver, there would be opportunities to help some of them leave that destructive lifestyle, the specialty of A Way Out.

“But we have to be extremely careful in helping them,” Ryan explained. Pimps are not too thrilled at losing $1,000 in nightly income when a prostitute decides to turn his or her life around.

Ryan believes that Love Denver also will result in eight new police chaplains for the association, as well as two new churches specifically designed to meet the needs of police officers. And as always, the volunteers readily share the Gospel, hoping to lead someone to the Lord.

If This Is Tuesday, It Must Be Gori

Sam Porter talks on his cell phone as he walks from the mobile kitchen across the parking lot to the lobby of Denver’s Central Vietnamese Baptist Church. Liem Le, the 36-year-old pastor has handed over the church to Oklahoma Baptists for the week of the convention. The volunteers sleep in Sunday School rooms, eat in the fellowship hall and shower in the mobile shower unit that almost always accompanies the large feeding unit.

Porter winces with every other step. The pain comes from an injury that occurred while Porter and other volunteers were working in Armenia as part of the BGCO Partnership Missions program, which he also directs. He will have knee surgery mid-September.

The phone call ends as Porter slumps onto the lobby sofa.

“The Russians are pulling out of Georgia and the SBC Baptist Global Response wants us in Gori on Tuesday,” he sighs. “They really want us there this week, but I told them we just couldn’t.”

The team of 10 will help the estimated 100,000 Georgians left homeless by the invasion move into shelters, provide basic repair to inhabitable homes and will assist with non-emergency medical care. The need for two doctors to make the trip goes unfilled.

Porter won’t be making this trip. There’s the upcoming surgery and the fact that his father is gravely ill. Even with 13 smaller feeding units with trained volunteers scattered across Oklahoma and the new large unit now on-line, “It sure seems like we can get spread pretty thin,” he says while contemplating who to contact for the overseas mission. Because disasters don’t operate by a schedule, Porter has to make 10 phone calls to fill each of the 12 open spots. Even though Oklahoma has almost 3,300 trained volunteers, “Most work full-time and can only give a day or two at a time,” said Porter. “That’s why it’s important for us to help states like Colorado implement and grow their own disaster relief programs,” he continues, “Then they can help within their own states, and can be trained for overseas relief missions too.”

As he talks about needing more trained volunteers, Porter begins to list other pressing needs.

“Our funding comes from the Edna McMillan State Missions Offering. We responded to 13 disasters last year, which significantly ate into our reserves. We need to build up our reserves again,” he says as he writes a list, “Then there’s the truck.”

While the new mobile kitchen was in the works for almost two years, the plan was to use the existing tractor to pull the trailer. In the meantime, the tractor, a 1991 Freightliner with almost 700,000 miles, began to develop problems. Recently, the truck broke down while pulling the old mobile kitchen back to Oklahoma City from the Picher tornado site. Three thousand dollars in repairs allowed it to limp back. A truck was rented to pull the new kitchen to Denver.

“We don’t have the money to build our reserves and buy a new truck,” Porter says while still making notes, “The cost for a good, low mileage used truck with sleeping quarters will probably be north of $100,000.”

About 150 people have moved through the food service line at the Federal (Command) Center when an official with the U.S. Public Health Service walks in the exit door to the serving line.

“I hear you’re serving lasagna?” she says to no one in particular. For a moment, time stands still as officials wearing badges identifying themselves as being with the Secret Service, FBI, Homeland Security, NORAD, ATF, U.S. Geological Service and Denver Police Department wonder what public health issue requires her attention.

“Oh!” she says realizing the problem as she turns on her heels and heads out the door and down the hall. There, she joins another dozen officials in line waiting to be served some Colorado Baptist lasagna.

View all posts by Steve Thomas