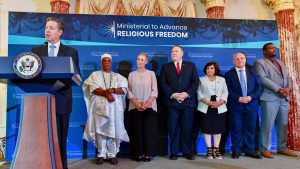 WASHINGTON (BP)—International religious freedom experienced both gains and losses in 2019, Trump administration officials said upon the release of the U.S. State Department’s annual report on the issue.

While countries such as Sudan, United Arab Emirates (UAE) and Uzbekistan made progress, the persecution of religious adherents persisted in China, Nigeria and other societies, reporters were told Wednesday, June 10 in a news briefing that accompanied publication of the International Religious Freedom Report.

Positive developments occurred in 2019, Secretary of State Michael Pompeo said at the briefing, but “there’s also a great darkness over parts of the world where people of faith are persecuted or denied the right to worship.”

Travis Wussow of the Southern Baptist Ethics & Religious Liberty Commission (ERLC) said while “it should grieve us to the core to read the abuses of power documented in this report,” he was grateful for the leadership of Pompeo and Sam Brownback, the United States’ ambassador at large for international religious freedom, in focusing “the attention of the State Department on the issue of international religious freedom.”

“This year’s report documents key details of the atrocities the Chinese Communist Party has committed against its own people,” said Wussow, the ERLC vice president for public policy. “Building on this research, the U.S. must continue to counter China morally, standing against the idea that its way of governing is a legitimate model for other developing countries.”

Regarding China, the report said:

—Government officials closed or destroyed Christian, Islamic, Buddhist, Jewish, Taoist and other houses of worship, according to multiple reports.

—The government barred people under 18 years of age from taking part in religious activities.

—Officials in the northwest region of Xinjiang have continued to imprison hundreds of thousands of Uighurs and other Muslims, as well as Uighur Christians, in internment camps.

“(S)tate-sponsored repression against all religions continues to intensify” in China, Pompeo told reporters. “The Chinese Communist Party [CCP] is now ordering religious organizations to obey CCP leadership and infuse communist dogma into their teachings and practice of their faith.”

Of Nigeria, the State Department reported:

—The terrorist organizations Boko Haram and ISIS-West Africa continued to carry out lethal attacks against Christians and Muslims.

—Clashes between Muslim Fulani herdsmen and mostly Christian farmers persisted, with some Christian organizations saying the Fulani were targeting Christians because of their faith.

In the June 10 briefing, Iran and Nicaragua also were mentioned as countries where religious freedom is under attack.

“Our work is clearly cut out for us,” Brownback told reporters. “We must continue to build partnerships and alliances with nations who share our commitment to advance religious freedom around the world, and we must continue our efforts to stop bad actors.”

Sen. James Lankford, R-Okla., a Southern Baptist, applauded the report’s release. Religious minorities “are often voiceless unless the (United States) stands beside them to protect their right to have a faith, live their faith, change their faith, or have no faith at all,” he said in a written release.

In releasing its latest report, the State Department did not announce a new list of “countries of particular concern” (CPCs), a category reserved for the world’s worst violators of religious freedom. The list is likely to be issued later this year.

In December 2019, Pompeo announced the re-designation of Burma (Myanmar), China, Eritrea, Iran, North Korea, Pakistan, Saudi Arabia, Tajikistan and Turkmenistan as CPCs. In its latest annual report, which was released in April, USCIRF called for the re-designation of the same countries and the addition of India, Nigeria, Russia, Syria and Vietnam to the CPC list.

Each year, the State Department also names a list of “entities of particular concern,” which typically consists of Islamic terrorist organizations, and a special watch list of countries in which violations of religious freedom do not reach the level of CPCs.

The State Department removed Sudan from its CPC list in December 2019. USCIRF reported in April that both Sudan and Uzbekistan had worked closely with the commission to produce change.

Of UAE, Pompeo told reporters it had become the first country in the Middle East to allow the building of a temple for the Church of Jesus Christ of Latter-day Saints.

During the briefing, Pompeo and Brownback cited as examples of the administration’s commitment to global religious liberty: President Trump’s June 2 executive order to prioritize religious freedom in U.S. foreign policy; the State Department’s second Ministerial to Advance Religious Freedom last year; and the establishment of the International Religious Freedom Alliance in 2019.

USCIRF—which is made up of nine commissioners selected by the president and congressional leaders— tracks the status of religious liberty worldwide and issues reports to Congress, the president and the State Department.