Singles learn about identity in Christ 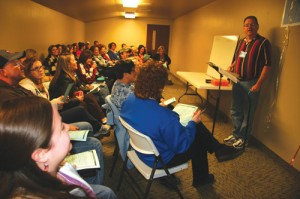 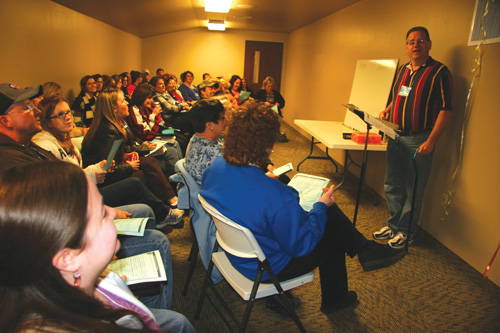 Speaking at the State Singles Conference at Falls Creek Baptist Conference Center, James Lankford, youth evangelism consultant for the Baptist General Convention of Oklahoma, encouraged the single adults to give glory to God for what He has done in their lives.

“The longer we live, the more we become comfortable in our own eyes,” Lankford said. “God will not share His glory with you.”

Lankford said the challenge of the day is to realize what is in our wallets (theme for the conference was “What’s in Your Wallet?) cannot be our self-sufficiency.

“The goal of life is to fulfill what God has called us to do,” he noted. “The problem is we often give glory to ourselves and others and not to what God has done.”

He observed that when we have spiritual problems, we think we know the solution.

“Most of us know what separates us from God, but we aren’t willing to deal with it,” he said.

As an example, Lankford told of the problem with an armadillo tearing up his backyard. When he discovered what the problem was, he got a pellet gun and took care of the invader. Telling his neighbor how he handled the problem, the neighbor said he didn’t have to do that. He explained to Lankford that he could have put a trash can over the armadillo and taken it to the country and let it go.

“I’m sure some farmer would have appreciated that,” quipped Lankford.

A few nights later, Lankford said he heard a loud blast, and he and his neighbors stepped outside to investigate. The neighbor who told him how to handle the armadillo was holding a shotgun which he had just fired on an armadillo who had created havoc in his yard.

“Cute little solutions don’t work,” he said. “We have to do something more aggressive.”

Lankford said the number one way most people deal with issues is to create boundaries.

“We think if I do this and don’t do that, my heart is with God,” he explained. “Although our heart wants to be with God, the rules don’t work. We’ve all heard a walk with God is a relationship, not a religion, but we often reverse those. We are called to a person, not a job.”

Lankford pointed out that no one but you knows where your heart is.

“Most of our sin is not ugly public sin,” he said. “We separate out our life where our hearts are far from God, but our lips praise Him.”

Lankford encouraged the singles to get alone with God before leaving the Falls Creek grounds.
“Make a radical change in your life,” he declared.

In addition to worship sessions led by the Steve Holt Band, the singles participated in breakout sessions on protecting their identity; acting like men; what if looks could kill; finding His strength in my weakness; perfect date/mate; watch your mouth and 1+1=3 (spiritual formation).