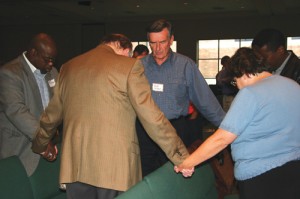 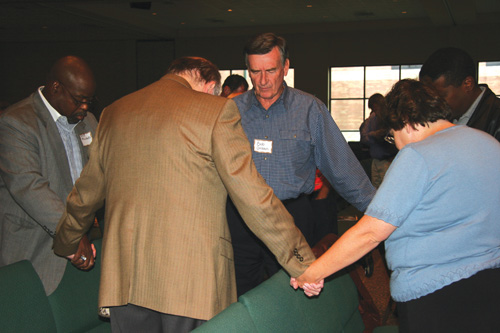 Whether or not that happens depends a lot on what Mohler, president of Southern Seminary, and other members of the Great Commission Resurgence Task Force recommend to the Southern Baptist Convention at its meeting in Orlando next June.

About 100 pastors and laymen heard the three members of the 22-member task force express the need to do something fresh and new in the SBC by more faithfully and effectively fulfilling the Great Commission. Even after several questions from the audience, how they are going to do that remains a question.

Towards the end of the questioning session, one layman said, “I’m hearing you guys can’t do anything.”
Floyd responded by saying, “We can encourage standards to be set in our churches.

“Our denomination can’t have resurgence,” emphasized Floyd. “The local church can, and members of our churches can. It starts in the hearts of the people. It’s going to take a spiritual resurgence in the heart of every one of our people.”

Floyd said his heart is with the local church, and churches have been given authority by Jesus Christ to take the Gospel to the ends of the Earth.

He also said the younger generation is on his heart.

“We have to see a major commitment of our denomination to bring along the younger generation,” he said.
Floyd also noted we have to do something for the sake of our nation. He reported the SBC is baptizing and reaching fewer people than it did in the 1950s, with a larger national population, although there are pockets of evangelism in SBC churches and overseas work is reaching people.

Richards agreed we are in a crisis, with declining churches and only a 10 percent growth rate by conversion.
“Our nation faces a moral and economic crisis, and our denomination faces a spiritual crisis,” he said. “We need a spiritual awakening. We need church members to see the Great Commission as a personal mandate from Jesus. It’s time for us to look at our denomination, where we are and call us to spiritual renewal.”

Doyle Pryor, pastor of Sapulpa, First began the questioning by asking what the task force’s working definition of the Cooperative Program is.

John Glover, retired from Haskell, First, said he doubted the task force would put the microscope on the IMB or NAMB, so would there be an emphasis on reducing state convention funds to send more to the SBC?

Floyd responded by saying the task force is committed to looking at all 12 SBC entities.

“The real struggle in SBC life is we are all part of autonomous local churches and autonomous state conventions,” he pointed out. “We cannot mandate anything for state conventions. If churches in Oklahoma want to send more dollars to the SBC, it is the prerogative of churches in Oklahoma. The task force will encourage state conventions to look at that. That is nothing new. We have to ask ourselves what responsibility we have to unreached people groups to reach them for Jesus. We have been charged how we can get more resources to reach the 5,800 people groups who do not have access to the Gospel.”

Mohler responded that the average church sends six cents of every dollar to the CP through the state conventions, that on average, retain two-thirds of the undesignated receipts.

“That leaves only two cents going to the SBC for budget allocations,” he said. “Only one cent is left for international outreach and one for North American missions, and a younger generation is asking why priorities do not line up with actual funding. A movement animated by the right priorities will get us to the right place.”

One pastor commented on the small number of tithers in SBC congregations.

“We are not cooperating,” he lamented. “We are centralizing into mega churches.”

“There has to be major stewardship emphasis to individual believers,” Floyd responded. “We have to go back to some great doctrine, Holy Scripture, to put it in the hearts of our people. If we want to have generous churches, we have to be generous.”

Mohler said to get back on track it is going to take many types of churches, not a one-size-fits all approach.
“We need to be churches that plant other churches,” he emphasized.

Following a question about ethnic churches being some of the fastest growing, Floyd said the SBC must become more diverse if it is going to reach people around the world.

“It isn’t about a bunch of Anglos getting together and deciding what to do,” he noted.

Richards explained that the task force represents other races, languages and cultures.

“The task force is aware of the changing face of America and the challenge that comes with it. We understand the need to approach the ethnicity of America,” he said.

Hess Hester, pastor of Tulsa, Southern Hills, expressed disappointment with the unity that was lost during divisions that occurred during the conservative resurgence.

“In my heart, the way we relate and do business together needs revision,” said Floyd. “We are living in an independent world that invaded the church. We have forgotten we are crucified with Christ. My hope and prayer is we’re going into the future together.”

Mohler said the resurgence was absolutely necessary, and it now gives opportunity to move forward together.
“I want my life to be marked by joy of serving Christ,” he said. “We can’t afford any more rank Southern Baptists. We want to make sure the world doesn’t call us unloving.”