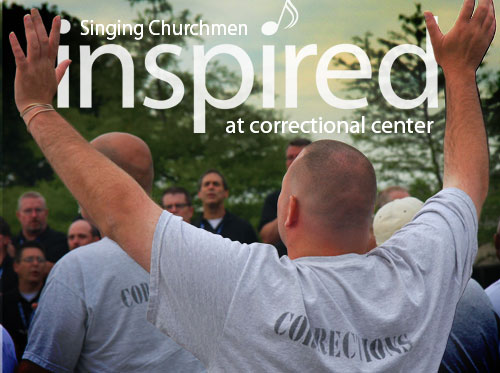 LEXINGTON—The Singing Churchmen of Oklahoma (SCM) and the Lighthouse Baptist Church choir at the Joseph Harp Correctional Center (JHCC) took turns praising the Lord during an evening outdoor concert May 10.

It wasn’t exactly an in-your-face clash of styles, but when the offender choir had finished its renditions of “I Was Created to Worship You” and “God is Good,” and marched back to their seats, the SCM sang “I Am” in an entirely contrasting style (a capella) to yet another standing ovation from the crowd of about 200 in attendance.

The styles really didn’t matter; the Object of the worship was the same. And, those lifting their voices in song shared more than an ability to sing praises to God. Although one group enjoys freedom outside the “yard,” and the other is under constant supervision behind the razor wire that lines its perimeter, each group shares the common identity of being a child of God free to worship his Creator.

There wasn’t any barrier to prevent the worship, adoration and thankful prayers to be lifted heavenward that evening—and both groups were changed as a result.

“I must say that it was nothing short of amazing! I knew it would be a special evening for two reasons,” said James Bradford, minister of music at Oklahoma City, Quail Springs, and interim SCM director. “God showed His favor by inspiring the leadership at the state level to approve our request (to go) quickly and the leadership at the prison couldn’t wait for us to get there. I give much credit to Lt. Gov. Todd Lamb’s office, Baptist General Convention of Oklahoma prison chaplain Don Williams, Warden Mike Addison and Chaplain Joe Spears for working together to make our entry possible.

“The most exciting part of the whole evening was witnessing the power of the Holy Spirit move through the courtyard where we sang.  The worship was singly focussed toward the Lord by both churchman and offender.  I don’t believe I have ever witnessed the intensity of the excitement, passion and focus coming from the Churchmen as I did that evening. They gave everything they had to communicate the Gospel. The offenders opened their hearts and were truly moved to worship and respond. The presentation at JHCC will be remembered as one of the highlights of ministry for the Singing Churchmen of Oklahoma for years to come.”

As for the offenders who came to the concert, “They absolutely loved it. I have had nothing but good feedback,” said Spears. “The Churchmen did a great job. Even the staff was amazed at how wonderful it was. Many of the officers were standing at the back listening, and that doesn’t happen very often.”

“The evening was absolutely wonderful,” said Lighthouse Choir member Hank M. “It touched so many men’s lives. I have been walking around the yard since, and the men are talking about the power that the SCM have and the glories that we got out of it. They brought tears to many men’s eyes. It was great.

“It made a great difference. I hope and I pray that they can get to see them again.”

“I am just so thrilled that you guys were able to come and Lighthouse Baptist Church was able to host you guys, Spears added.”

Lighthouse Church was organized in June 2011 as a church plant of the Union Association, said Spears, who is the church’s pastor. The church meets on Thursday nights in the facility’s chapel with between 60-70 in regular attendance. Union Association Director of Missions Preston Collins said the church has recorded 47 baptisms since the first of the year.

The baptismal pool will be especially busy in the near future, since 18 offenders indicated they had accepted Jesus Christ as Savior following Bradford’s short invitation at the close of the concert.

“Spears has such a heart for each offender at JHCC,” Bradford said. “He volunteered for many years, and finally got the opportunity to serve full time as JHCC Chaplain. God has honored Chaplain Spears, and his influence and impact on those men is immeasurable.

“Many offenders have found forgiveness and salvation through his ministry. His main objective is to touch the lives of each new offender admitted to the Oklahoma prison system through JHCC. Countless men have experienced encouragement and hope in a seemingly hopeless situation. Joe Spears is a hero in my book!

“My deepest appreciation goes to the Warden Mike Addison, Chaplain Spears, the staff and officers for allowing the SCM to share in a blessed and anointed evening at the JHCC. All praise goes to our precious Lord and Savior, Jesus Christ!”

“Whenever we sing, the Churchmen always strive to exhort and encourage our audience,” added Steve Holt, worship pastor at Lawton, Cameron and SCM president. “At JHCC, we were the ones who were encouraged and blessed by the praise and worship of the men who came to hear us sing.

“I was humbled and challenged by the sincere passion of the offenders to share the life-changing truth of the Gospel and genuinely live out their faith inside the walls of the prison.

“It is my prayer that the Churchmen will have future ministry opportunities like we had at JHCC.”

“I was honored to see the Churchmen hold true to our emphasis of servant leadership this year,” Bradford concluded. “Matt. 20:28 says ‘Christ did not come to be served, but to serve, and to give His life-a ransom for many.’ I’ve seen that lived out to the fullest in each of the Churchmen this season.  Oklahoma Baptists can be proud of the way our worship leaders serve their Lord, their families, their churches and each other all for God’s glory.”