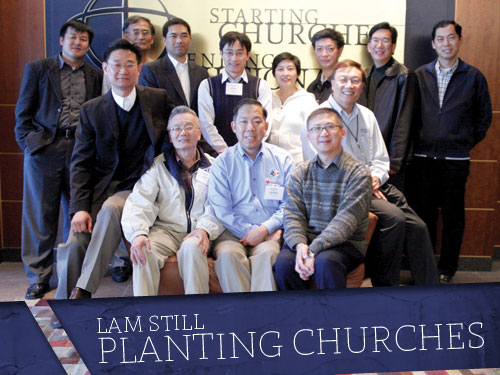 When Ted Lam came to the Baptist General Convention of Oklahoma in 1997 as language missions specialist, there were around 1,300 Southern Baptist churches in the state. When he retired in 2008, the number of churches had increased to more than 1,700.

One of his major responsibilities was planting new churches. Today, four years into retirement, Lam is still planting churches, not just in Oklahoma, but across the nation. In October 2010, the Chinese Baptist Fellowship of the U.S. and Canada appointed Lam church planting ambassador. Since that time, 17 new Chinese churches have been planted, and there are 13-15 “in the works.”

In retirement, Lam serves on the staff of Oklahoma City, Northwest, which currently has eight congregations meeting on its property.

“My vision meshed with Northwest’s,” said Lam. “I came to help them add congregations. When I came, we had five congregations, and now we have eight, including a Mandarin church, which was started last June with Pastor Anthony Li, and now has about 40 members.”

Lam said God gave him a gift of how to start churches, although he didn’t actually get into “church work” until he was in his 40s.

Born on the historic day of Dec. 7, 1941 in Fu Zhou, mainland China, Lam and his family joined a mass exodus of people who fled to the nearby island of Taiwan as communists took control of mainland China. He stayed there 10 years, then moved to Hong Kong for his high school years and came to the United States when he was 18 to study math at the University of Nebraska.

In 1975, he moved to Tulsa to work as a computer analyst with American Airlines. In 1985, Lam surrendered to ministry and started classes at Oklahoma Baptist University, receiving a bachelor’s degree in biblical studies in 1989.

In 1985, he started Tulsa International as a Chinese Bible study meeting on the University of Tulsa campus, and it became a church in 1991.

Lam said there are currently 240 Southern Baptist Chinese churches in the U.S. and Canada. In June 2010, he was invited to the North American Mission Board to  discuss how to increase the number of Mandarin Baptist churches, because 90 percent of Chinese newcomers to the U.S. are from mainland China and speak Mandarin.

“The vision we came up with is to add 600 churches in the next 10 years,” said Lam. “That seems impossible, but there are 50 states in the U.S. and 10 provinces in Canada. If every state and every province starts one new church a year for 10 years, we have our 600.”

Lam has traveled across the nation presenting his four-part strategy for starting the Chinese churches.

“We need five churches to help for three years, each giving $100 a year, and we can start a church,” Lam explained.

Fourth is deciding where to place the church by studying population and demographics.

Lam observed that to start churches, there needs to be a movement created, as well as a positive atmosphere.

“We must let people know they can do it,” he declared. “There are not enough pastors to do this. We have to engage lay people.”

Lam noted that the need for Chinese churches is great.

“In 2011, Chinese students surpassed students from India in the number of international students in the U.S.,” he revealed.

Lam said he goes to China twice a year to learn again how Chinese people think.

“Although I am Chinese, I have been in America 51 years,” he said. “So I have to renew my mind in Chinese.”

Lam acknowledged that almost 10 percent of the Chinese population is now Christian.

“That doesn’t sound like much, but with a population of 1.4 billion, that means 140 million Christians live in China, making it the top country in numbers of Christians.

Lam disclosed that there are only 10 Chinese churches in Oklahoma, and four of those are in the Oklahoma City area.