Singing as they go! 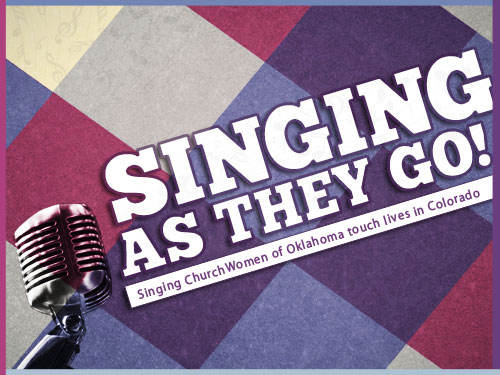 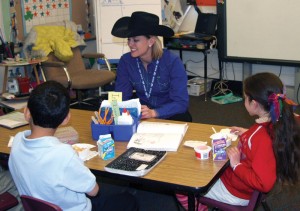 Kristin Williams, who celebrated her first wedding anniversary on the trip, works with children at Fulton School of Excellence in Aurora, Colo. (Photo: Dana Williamson)

As 75 members of the Singing ChurchWomen of Oklahoma (SCW) boarded five planes for Denver March 16, they had a schedule of activities for their week-long mission trip. But few could have known the impact of that itinerary on the capital city of Colorado and surrounding areas.

Before the week was over, as many as 30,000 people had been affected by the ministry of these women, including at least seven whose lives were changed for eternity.

Oklahoma Baptists are in the second year of a five-year partnership with Colorado Baptists.

“We could not be happier with the way the partnership is going,” said Jim Misloski, state director of missions for the CBGC. “We have teams from Oklahoma all over the state this week. We are so thankful for what you are doing and how you have blessed us.”

On the second day of the SCW trip, Misloski told the women he had not stopped hearing about “the great stuff you did yesterday and what God did through you.”

Kevin Hasenack, Colorado coordinator for the partnership, said mission teams coming to Colorado from Oklahoma are usually comprised of 20 or fewer people.

“This group is unique because there are almost 100 people,” Hasenack noted. 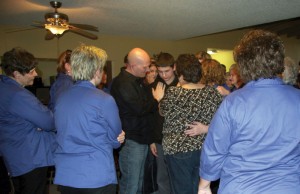 Those 100 people, which included about 25 traveling with the SCW, hit the ground running, performing at three churches; putting together door hangers; assembling more than 25,000 mailing pieces, most for a church plant; going door-to-door handing out flyers for Easter services, distributing food, working with children in a trailer park and volunteering in a school.

The women sang at two morning worship services at Mississippi Avenue Church in Aurora, March 17, and to a packed house during an evening concert. Pastor Mitch Hamilton, who was saved, called to ministry and married at Harrah, First, also served as pastor of Farris Church in Atoka-Coal Association.

“Oklahoma became a lot uglier state when these beautiful ladies flew out yesterday,” commented Hamilton. “Their heart is to share the love of Jesus Christ, and it shows on their faces.”

A 10-year-old boy was saved during the singers’ time at Mississippi Avenue. The group also sang concerts at Arapahoe Road Church in Centennial, and Cornerstone Church in Windsor.

Although the women believe music is their ministry, they did hands-on work at churches, community centers and a school. They put together 1,000 door hanger packets for Arapahoe Road Church containing the “Cross” plan of salvation and a brochure with church information. 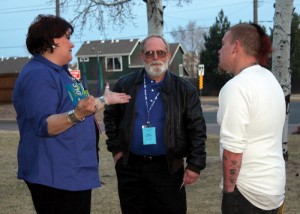 “This is the biggest undertaking we’ve done,” said church secretary Connie Priddy. “It will help us reach the neighborhood around us and get people interested in our church. We couldn’t have done it without the ChurchWomen’s help.”

The group spent one day in Colorado Springs divided between two locations. At Vanguard Church, 47 of the Oklahomans put together a 20,000-piece mailing for a church planter who is working with Hispanics.

“This is a tremendous blessing for the church planter to be able to get out information about his church,” said Hasenack. “He could never do this alone.”

At a trailer park in the southeast part of the city, the remaining women and their travel partners participated in various ministries for Hope Community Center and Hope Community Church, which meets at the facility.

One of the biggest hits at the trailer park was a handbell concert on an outdoor basketball court, in which children returning from school got to participate. Most of the children had never seen handbells, let alone rung them. Barbara Bell, Oklahoma City, Trinity, handed out New Testaments to the older children. Curious about their new gifts, four of them came to handbell director Wynn Anne Hook, Oklahoma City, Village. She told them to go home and read the third chapter of John. But they didn’t want to wait. Hook helped them find the chapter and explained it to them. The four children prayed and asked Jesus to be their Savior.

“It was a special and unexpected moment,” said Hook. 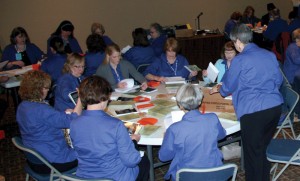 A group of ChurchWomen put together a 20,000-piece mailing for a church plant in Colorado Springs. (Photo: Dana Williamson)

After distributing food, clothing and flyers announcing an Easter egg hunt and Easter worship services, as well as helping Hope director Christine Nieto with various other activities, the singers led a worship service for Hope Community Church, where Pastor Dan Robbins, who has been a Christian only a short time, preached a brief message.

He revealed he was raised a Jehovah’s Witness, was a crack cocaine user and spent time in prison. He said he read the Bible while in juvenile detention.

Robbins said he loves what the women are doing—coming out and spreading hope.

“I love Jesus, and I love what He is doing,” Robbins explained. “He’s sending us people from Oklahoma. We prayed for God to send somebody, and here you are.”

Following the service, two young men were saved. One of men had not been in the worship service, but was witnessed to by Angela Lind, Lexington, First, and Mark Johnson, Midwest City, Soldier Creek, on the lawn outside.

“He said he was not good enough to be saved,” said Johnson. “He told us he had killed a man, and a pastor told him that was an unpardonable sin.”

“I told him the only unpardonable sin was not accepting Jesus,” said Lind. “I asked him if he was ready, and he said ‘yes.’”

In thanking the women for coming, Nieto said, “You don’t know how bad these last two months have been. You have restored my joy. Thank you so much for coming, and you can come back next month.”

Because the community center is struggling financially, the women collected an offering among themselves and gave $927 for supplies.

On their final day in Colorado, the singers were again divided into two groups. One volunteered at Fulton Academy of Excellence and the other helped with ESL in a Russian community, prayer-walked the area and put together a 5,000 piece mailing for Central Church in Aurora.

At Fulton, the women were assigned to classrooms to help the teachers and performed two assemblies in the gym on the history of American music. They interacted with the children, ate in the cafeteria with them and played with them during recess.

Luke Baker, who is a native of Yukon, and pastor of Aurora, Central, has led his church to have a partnership with Fulton Academy. The church furnishes mentors, helps buy school uniforms for the children and provides gifts for the families at Christmas, among other ministries.

In the school are children from 29 countries who speak 16 languages.

“God has brought the world to us,” said Baker. “We have 30,000 refuges in Aurora. There are people from 134 countries, who speak 115 languages. We are trying to fulfill the Great Commission.”

Baker said when he asked Principal Jill Lliteras how long she wanted the SCW at the school, she said “all day.”

Thanking the women for coming, Baker said, “The kids ate you up. They loved hearing you sing, loved that you played with them and ate with them. God is really at work in this school. What you’ve done here will be watered and will continue.”

The women also did impromptu concerts at Red Rock State Park, the Garden of the Gods in Colorado Springs and at the Colorado State Capitol building.

At a final dinner on Thursday night, the women shared what the week had meant to them.

Mitzi Burger, Oklahoma City, Brookwood, was among those who spent a day stuffing envelopes.

“We know those mailings are going to touch people,” she said. “They need so much here. We have so much in Oklahoma. Think of the little things we do that make a big impact on those around us.”

Kristin Williams, Ponca City, First, said she was reluctant to make the trip because she would be celebrating her one-year wedding anniversary during the week, and she didn’t think her husband, Darrin, would be able to come because of his cattle business.

“But Darrin came with me, and it was such a blessing to see my husband ministering,” she said. Kristin and Darrin were popular, especially with the children, because of their western ambiance and Darrin’s rope tricks.

Bart Morrison, worship pastor at Ada, First and director of the ChurchWomen, told the singers he didn’t have the words to express how he had been changed personally.

“You went and did as only a group of wonderful, committed women could do,” he told them. “Every person you touched was a Kingdom moment. As we look back, we can see God’s hand in every activity—even in those unplanned moments. We will never know all that was accomplished by letting the Holy Spirit work through each of us.”

Misloski said what he loves about the Oklahomans is that they are so full of the love of God.

“You get it,” he said. “When you show up, you are joyful, no matter what you are doing. When you sing, you light up the place. Whether it was suffering paper cuts while stuffing envelopes or hugging on kids who never get hugs, you proved you came to do whatever God said to do.”