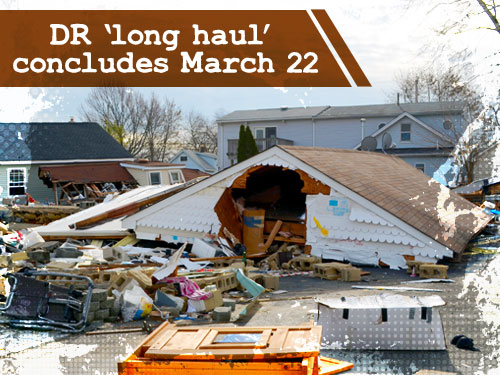 When others may have forgotten the people affected by recent natural disasters, Oklahoma Baptists have been quietly assisting the needy through the Baptist General Convention of Oklahoma’s (BGCO) disaster relief efforts. The longest continuous deployment of the group’s disaster relief volunteer efforts in its 40-year history concluded March 22 .

The organization has had teams actively deployed on disaster response since June 2012.

“At least one volunteer from Oklahoma Baptist disaster relief has been working continuously  somewhere for the past nine months,” said Sam Porter, BGCO disaster relief state director. “We’ve helped with the wildfires in New Mexico and Colorado, back to Oklahoma in our wildfire efforts, with Hurricane Isaac assistance and, finally, in New Jersey, Staten Island, Long Island and Brooklyn with Hurricane Sandy relief.”

“I am so proud and thankful of our BGCO disaster relief teams and the amazing record of service and ministry,” said Anthony L. Jordan, BGCO executive director-treasurer.  “What a great group of servants for our Lord!”

The BGCO DR organization has had a maximum number of volunteers serving out of state, with 105 Oklahomans volunteering for two weeks in New Jersey to a low of 20 volunteers in New York, New Orleans, Colorado or New Mexico. During the Oklahoma wildfire response in August 2012, Oklahoma Baptists had about 250 volunteers on the ground every day for 21 days to clean up 305 of the 602 Oklahoma homes affected.

Team members in Brooklyn who had been helping Hurricane Sandy victims recently wrapped up their work, helping repair the church they had been staying in while there.

“Our teams want to leave the place better than when they found it,” Porter said. “But, the need never ends. I  visited Haiti recently to follow up on some of our efforts following the devastating earthquake in 2010. Since then, we’ve installed 120 water wells, built 66

“Words cannot express my gratitude for the tremendous work Oklahoma disaster relief has done. Your folks have displayed the true meaning of bringing help, healing and hope to people in times of disaster,” wrote Fritz Wilson, executive director of disaster relief for the North American Mission Board, in an email to Porter.

“Thousands of people have experienced the love of Christ through your efforts. Some have come to know Him as Savior and Lord. We will never know this side of Glory the true Kingdom impact of the Oklahoma disaster relief ministry this past year.

“Thank you for your leadership. You did what the Master taught by equipping the saints to do the work and then empowered them to ‘get-er-done’ and that’s what they did. It is a privilege to serve shoulder to shoulder with you and your folks!”

For updates on Oklahoma Baptist volunteers, or to make a tax-deductible donation to BGCO disaster relief, visit www.okdisasterhelp.com.