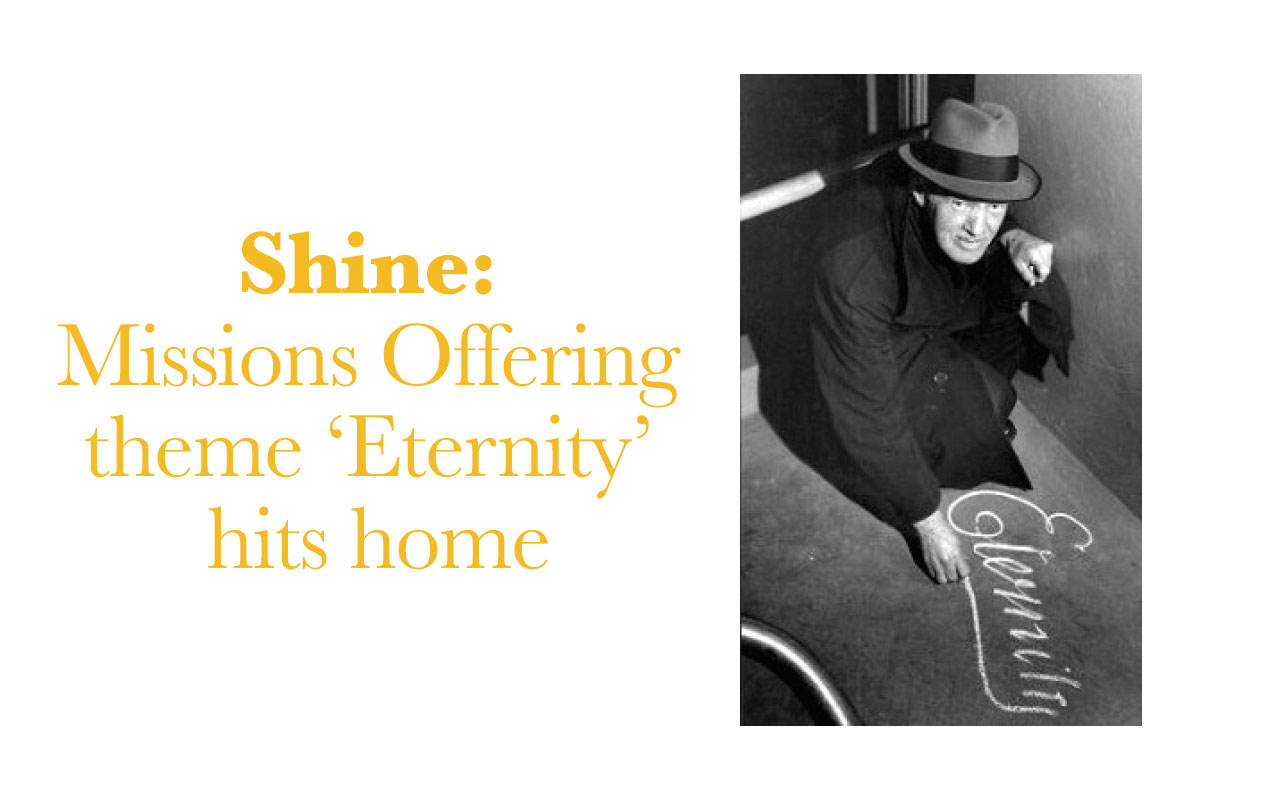 Several months ago, Kelly King, Baptist General Convention of Oklahoma (BGCO) women’s ministry specialist, and Brian Hobbs, BGCO communications director and Baptist Messenger editor, pulled a group of Oklahoma pastors and leaders together to explore the possibility of a new theme for our State Missions Offering.

This offering is important to the work of the Gospel throughout our state, as it assists every Association and, ultimately, every congregation in fulfilling the Great Commission. Chris Forbes,  promotional strategist with the Robert Haskins School of Christian Ministry, shared a story of a simple witness given by Arthur Stace of Sydney, Australia.

Stace, who was a reformed alcoholic, gave a simple witness to his community for more than 30 years by writing in chalk the word, “Eternity” on the sidewalks of his city.   The story reminds us that through our efforts to make Christ known, what is at stake is the eternal destination of souls. We adopted the theme with one hesitation. Was there an Oklahoma connection to the story?    To my delight, we have found the first Oklahoma connection to Arthur Stace and his simple one word witness, “Eternity.”

“I served as pastor of Cyril, First, from 1981 to 1985. During my tenure there, after preaching a sermon on the importance of acting on every opportunity that Christ affords us to share the Gospel, a gentleman who attended our church while on a two-month assignment to the Cyril Refinery with his engineering company approached me with the story of his conversion.

“While serving in the U.S. Army in the South Pacific during World War II, he was granted a brief period of liberty in Sydney, Australia. Early one morning, unable to sleep, he arose, dressed and made his way out to the nearly deserted pre-dawn streets of the city. Just after daybreak, while ambling down a sidewalk, he noticed an older, small-statured man kneeling on the sidewalk ahead of him. As he drew closer, he noticed the man was writing something in chalk on the concrete walkway. Finally, standing directly behind the man and peering over his shoulder, he was able to read the word ”Eternity” written in beautiful copperplate script.

“At that moment the little man quickly rose to his feet and dusted the chalk dust from his hands and sleeves. My friend queried the man, asking him ‘what the deal was’ with the word he had just written. The man cheerfully replied, ‘Eternity, my boy. Eternity is what we were made for. We will spend eternity in either Heaven, or Hell—so you must choose wisely, you see! Now, you have a nice day!’ the little man added, as he patted his bewildered listener on the shoulder and scurried away. The young soldier stood and stared at the beautiful work of street art, and pondered deeply what the man had said in their brief exchange. His words haunted him all that day and for many days that followed.

“Never a religious person, the young American found himself thinking and even dreaming about the message of ‘eternity’ almost every day. He was soon back with his unit, where, for the first time in his life, he obtained a Bible and began to read it.

“He eventually returned home to the States, where he met a young lady who was a believer, and with whom he began a relationship. One of the prerequisites for dating her was that he must attend church worship services with her. Soon, during an invitation offered in one of those meetings, he gave his life to Christ. But he told me that he was absolutely certain that if he had not encountered that little man in Sydney, who had faithfully seized the brief opportunity to share the Truth with him, he would never have become a follower of Jesus Christ.

“I never learned the rest of the story about ‘Mr. Eternity,’ aka Arthur Stace, until Alan Quigley shared it during an Executive Board Meeting for Pottawatomie-Lincoln Association in August.

“I wonder how many men and women will I meet in Heaven who came to Christ because of this remarkably obedient little old man? Heavenly Father, please enable me to live out my days with this same, all-consuming awareness of ‘Eternity!’”