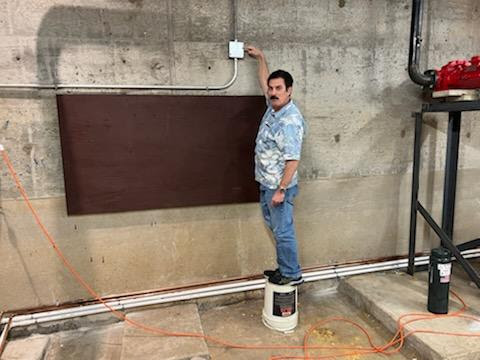 Above: Pastor Charles Kimball shows where the water level reached at Shawnee, First after the winter storm flooding in Feb. 2021.

A historically-cold winter storm caused a major problem for Shawnee, First on Feb. 14, 2021. A torrent of water from a fractured pipe was pouring into an annex of the church’s 112-year-old structure. 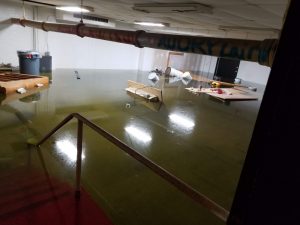 Pastor Charles Kimball said the uncontrollable pouring was “like being discharged from a fire hose” into the building’s basement and subbasement. An estimated 100,000 gallons of water filled the building and was rapidly rising.

It was soon evident that virtually all operations would need to be shut down in the midst of the record blast that would reach 13 degrees below zero, two days later. The damage was disheartening.

Faithful members of the church were called to help assess the situation and with recovery, including Bill Ford, David Stevens, Rocky Wade and John Peck.

“We were blessed to have men in the church with contacts or knowledge essential to the restoration,” Kimball said.

Clean-up was the first challenge. Fortunately, Stevens, Ford and fellow Beacon Sunday School class member Carl Moss, had recently labored to clean out years of discarded and accumulated materials in the building’s basement. The basement had to be pumped dry and flotsam removed that had been missed in the initial cleaning.

Building contractor Monte Garner volunteered his crew to pump nearly 400 tons of water from the basements. Volunteer paint contractors Chris and Patti Neikes were quickly on hand also to begin dismantling fixtures and hauling residue from the wreckage.

Randy Jones from American Heat and Air had been on site to assess damages to the environmental heating and cooling systems. Exhaustive repairs and replacement soon began for those fixtures, as well as controls to the units.

The antiquated galvanized pipes also had to be torn out and replaced with modern plastics.  The exposed water connections outside the building were moved inside to prevent another heavy freeze from bursting the seals.

The huge boiler, original to the building’s 1952 construction, had to be dismantled, removed and replaced, as well as the gas lines, air conditioning units, conduits and electrical wiring.  The older iron and steel fixtures had to be removed by heavy lifts from both outside and inside the building.

Although the buildings’ elevators remained intact, it was evident that the hydraulic system, gear box and pulleys essential for operation were useless, and much of the super structure had to be rebuilt to code.  Carpentry and painting were needed, too.

Initial damage estimates reached more than $550,000, which would only rise as repairs became clear.

Some unanticipated and required updating and safety had to be renegotiated for inclusion in the church’s insurance, requiring hours of time.

The $7,500 deductible insurance amount was quickly absorbed. Oklahoma Baptists sent $6,500, while Shawnee, Immanuel, who had contacted Shawnee, First with offers of help, contributing an additional $1,000 of the deductible amount.

Shawnee, Immanuel, which began as a mission of Shawnee, First in 1930, “came full circle to help First Shawnee,” Kimball said. “We are blessed and grateful to our brothers and sisters at Immanuel.”

By Oct. 15, 2021, much of the building and other annexes were ready for operations. The first services in the fully-repaired Shawnee, First were on Feb. 6, 2022, just short of the one-year anniversary of the historic storm.  A celebratory luncheon is set for early March.

In the historic weather event, Shawnee, First learned much about itself and others. Most evident was the unselfish response of a myriad people from both outside and inside the church. Accolades are especially awarded to the fire department, without whom one of the buildings could have suffered irreparable damage.

Volunteer contractors and outside workers, volunteers from the church itself, and the church pastor and staff were all on hand, often without being called or, in many cases, not compensated. Oklahoma Baptists and insurance specialists worked with the church to provide the best opportunities for restoration.

This experience demonstrated how much Shawnee, First means to the City of Shawnee and its surrounding community.

God is abundantly good. His mercies are evidenced in the hands of His people. As the Apostle Paul said, “how beautiful are the feet of those who preach the Gospel of peace and bring glad tidings of good things.” And for that, members of Shawnee, First are thankful beyond measure.

Donald W. Rominger, Jr. is a member of Shawnee, First