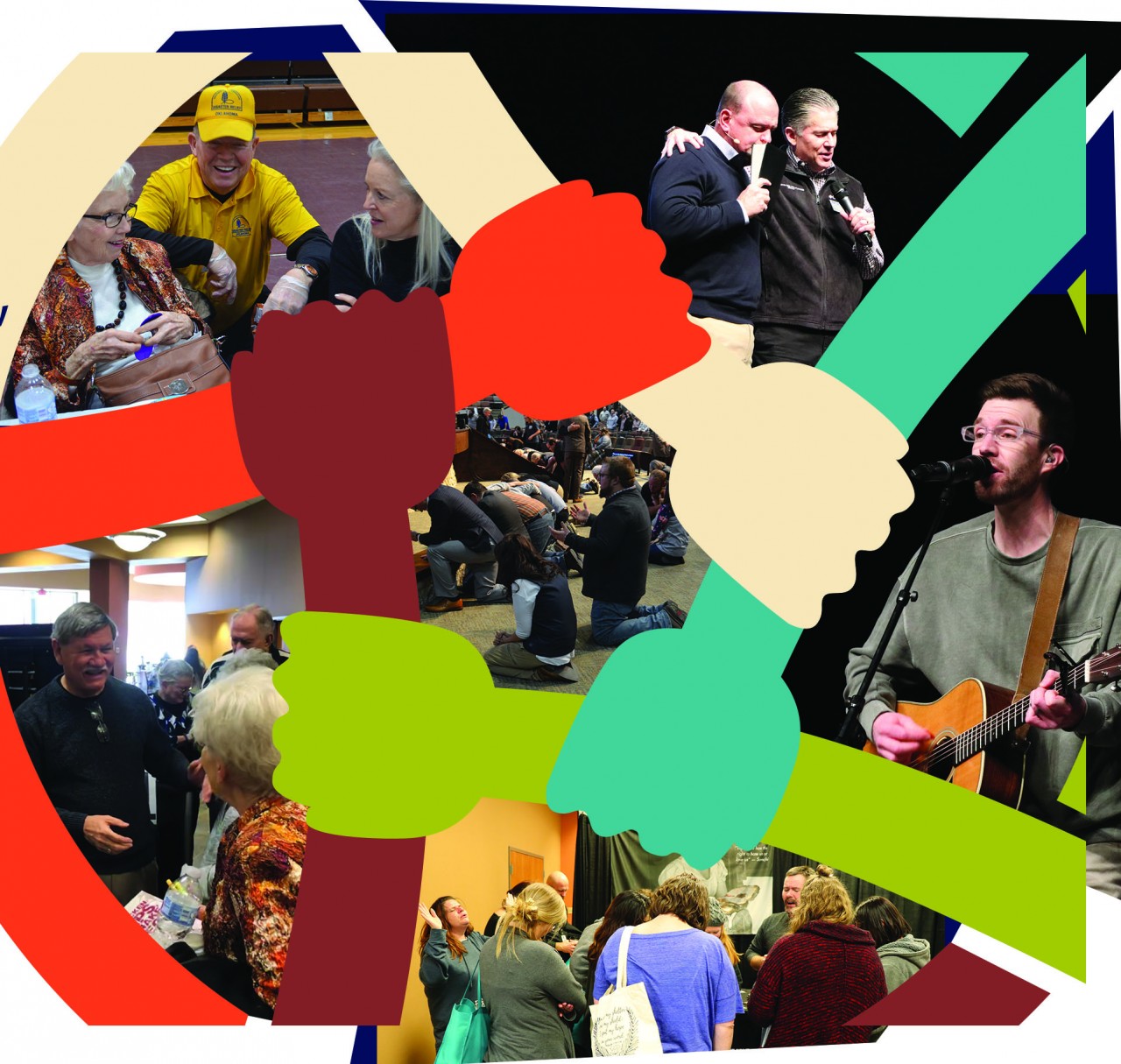 DEL CITY—The 2019 State Evangelism Conference (SEC) provided an array of speakers, offering an emphasis of sharing the Gospel to everyone in the single-word theme of “Multiply,” Jan. 28-29 at Del City, First Southern. Messages were challenging and encouraging, and attendees had opportunities for specialized evangelism training through breakout sessions and were even given the chance to witness in the closing session. 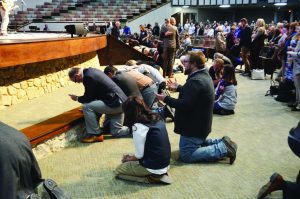 SEC attendees respond during the Tuesday evening session, praying for stronger commitment to evangelism across Oklahoma.

The SEC opened with a morning session, emphasized for senior adults. Hance Dilbeck, BGCO executive director-treasurer, was the first SEC speaker, and he challenged attendees to embrace brokenness as an opportunity for the Gospel.
“Baptists of Oklahoma built a denomination out of people nobody else wanted,” Dilbeck said. “We went after broken people. People who didn’t know how to behave, didn’t have any background or standing or status—those are the kinds of people that are ready to repent of their sins and trust in the Lord Jesus Christ.”
Speaking from Matt. 9:35-38, Dilbeck shared how Christians need to share their faith out of compassion for lost people.
“Here, our Master is teaching us that the most important thing we can offer to the world is proclaiming the Good News of the Kingdom,” he said. “The Bible tells us that the Good News of the Kingdom is that God in Christ Jesus through His death and resurrection is setting this world right by setting you right and setting me right.”
Christian comedian Chonda Pierce shared many laughs and entertaining stories in the opening session. She said she got her name because her mom drove a Chevy and her dad liked Hondas.
Pierce did share a message of encouragement to older Christians, how their influence does matter.
“I know sometimes you feel like you’re not viable,” she said. “But I’m going to tell you something, especially in this culture and in this day and age, we need you now more than ever before.”
The Monday afternoon session featured three speakers. A.B. Vines, senior pastor of San Diego, Calif., New Seasons and first vice president of the Southern Baptist Convention, opened the session and shared how important relationships are in sharing the Gospel.
“Most people come to Christ by a relationship—a personal relationship with someone they know who helped them ‘come and see,’” Vines said, referencing John 1:45-46.
Ricky Capps of the Master’s Voice, the music group that led times of worship throughout the SEC, also spoke Monday afternoon. Preaching from Luke 7:36-39, Capps spoke on “wanting Jesus more.”
“The litmus test of knowing if you’re saved is a changed life,” he said. “We’re so afraid of offending people. The problem today is Christians want to be keepers of the aquarium, not fishers of men.”
Bill Britt, founder and president of Compel Outreach International, concluded the Monday afternoon session, speaking on seeing people as Jesus sees people.
“We’ve got to value people like Jesus does. It’s easy to love the crowds and not the people,” Britt said. “The Gospel is as powerful today as it was when Jesus gave us these words. The power is not in your winsome personality or your Colgate smile or your sweet presentations. The power is in the Gospel of Jesus Christ.”
The Monday evening session included more music from Master’s Voice and a message from Elmer Towns, co-founder of Liberty University and prominent author and speaker on church leadership. Towns stressed the importance of fasting in spiritual leadership.
“Oklahoma needs a touch of God, and to get a touch of God, we have to touch God first so He can touch us,” Towns said. “I want to challenge you, if you’ve never done it, try a fast, maybe a one day fast. Don’t try a 40-day fast. Try a one-day fast, just to know God. What you do is you put aside pleasure, put aside necessities to get into God’s presence to trust and to know Him.”
Dilbeck concluded Monday evening with a message from Titus 3. His points were “God made us new, made us right and made us His.”
“I love the simplicity of ‘He saved us,’” Dilbeck said, referring to Titus 3:4. “Isn’t that great language?”

SEC participants had the opportunity to spend Tuesday morning, Jan. 29, attending breakout sessions, with more than 15 courses offered. Many of the sessions had full rooms, and all of them were well-attended.
The afternoon session had speakers Thomas Hammond, Kie Bowman and James Emery White delivering messages. Hammond, executive director of Georgia Baptist Mission Board, opened with a message from Acts 3, and he commended the BGCO and Dilbeck on leading Oklahoma Baptists in the days ahead.
“I look forward to learning from what you’re going to be doing, because I can promise you, the ways in which you’re going to be adjusting and changing to reach the culture, there will be many state conventions that will be watching and learning from you,” Hammond said.
Bowman, pastor of Austin, Texas, Hyde Park, shared a challenging message titled “Starting over with God.” The four points of his message were: 1. Pride steps down; 2. Prayer steps up; 3. Passion steps out; and 4. Purity steps in.
“Prayer moves the hand that moves the world,” Bowman said. “What a blessed assurance that God is everywhere, and God is right here.”
White, pastor of Charlotte, N.C., Mecklenburg Community, challenged SEC attendees on facing today’s cultural issues, which includes a majority of people being unaffiliated with any religion, especially Christianity. He said today’s Christians need to return to “Early Church evangelism.” 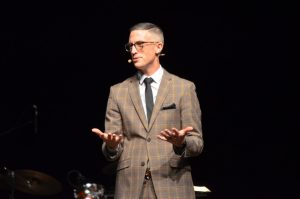 “You know what made the Early Church explode?” White asked. “You know how they did evangelism? Michael Green wrote an academic work on the growth of the Early Church, and by the year A.D. 310 there were over 20 million followers. I can sum up that whole book for you in a single line. Here it is, ‘They shared the Gospel like it was gossip over the backyard fence.’
“If you don’t have any non-Christians in your orbit,” White continued, “you need to get out of your holy huddle, break out of your Gospel ghetto, and you’ve got to get out there and start making some friends.”
SEC concluded with Ed Newton speaking in the Tuesday evening session. A longtime Falls Creek favorite speaker, Newton is in his third year as pastor of San Antonio, Texas, Community Bible, after serving in itinerate ministry for 13 years.
Newton shared his appreciation for the BGCO and its support of his ministry. He said all his four children want to work at Falls Creek, and he prays his oldest daughter will attend Oklahoma Baptist University.
“I believe in what God is doing in your state,” Newton said. “I thought the very first place I would pastor would be in your state because I have such favor in this state. There is no other convention that I ever preached in that is so rooted and so grounded and so connected and so seeped up with the heart of God than the Oklahoma Baptist Convention.”