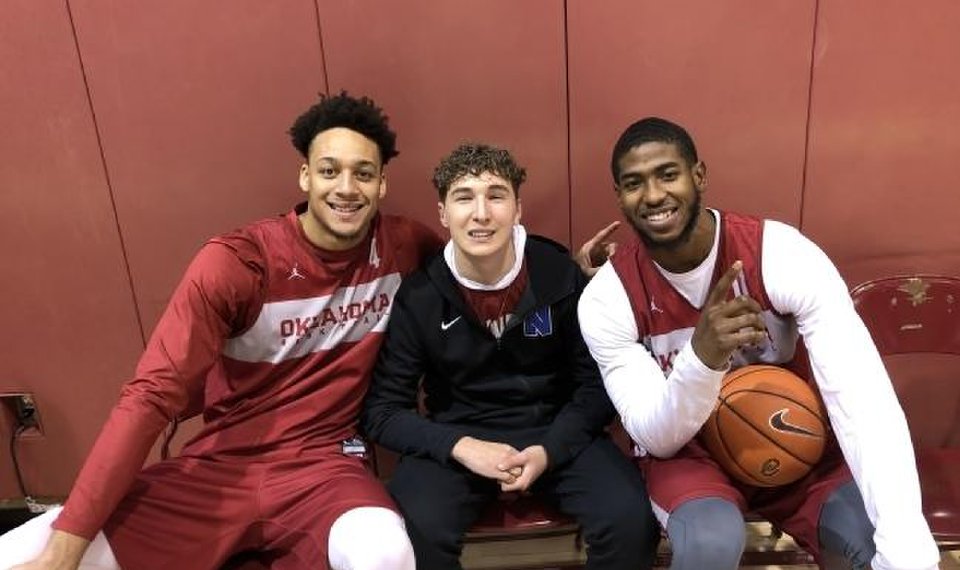 NORMAN—Caleb Freeman’s father said the University of Oklahoma (OU) men’s basketball team “rolled out the red carpet” for Caleb on Saturday, Feb. 9. The OU squad featured Caleb as the honorary sixth man during the starting lineup announcements, when the Sooner hosted Texas Tech.

“It’s a day we will never forget!” Jeremy Freeman, pastor of Newcastle, First and Caleb’s dad, posted on Facebook “There’s no way to thank everyone individually, so we would like to say thank you to everyone at OU for making this happen; thank you to Coach Lon and the team; thank you to the Newcastle community for showing up big; thank you to Caleb’s basketball team for coming; thank you to our church family; thank you to Kevin McAfee and his production team who captured everything so perfectly; and thank You most of all, Jesus Christ, for the incredible miracle YOU have done!”

Caleb’s story continues to be told, how he recovered from a severe car accident, Dec. 19, 2017, as he and his brother Clayton collided with a semi-truck while heading to an OU basketball game that evening. Clayton survived with no ill affects, but Caleb suffered traumatic brain injuries. He spent two months in a coma and then went through extensive rehabilitation several months after he awoke.

Both The Oklahoman and Oklahoma City NBC-affiliate KFOR Channel 4 reported on Freeman’s big day with the Sooner basketball team.

“When I first walked in, everyone already knew who I was,” Freeman told The Oklahoman about an earlier appearance with the Sooners. “They were all giving me bro shakes. It was really cool.”

On KFOR.com, the news station features a video of the introduction of OU’s starters with Caleb. The full story can be found here.

While on the path to recovery, Freeman and his dad, Jeremy, visit churches across the state of Oklahoma telling Caleb’s remarkable story.

Caleb will be one of the speakers at the Baptist General Convention of Oklahoma Women’s Retreat at Falls Creek Baptist Conference Center April 12-13. Lysa TerKeurst and Rosaria Butterfiled will also be featured speakers at the retreat. Women interested in registering for the retreat can visit, www.bgcowomen.org/okretreat.

The Pray for Caleb Facebook page offers regular updates on Freeman’s progress. Caleb’s story will also be made into a movie called, “Caleb’s Hope.” For more information, visit www.calebs-hope.com.