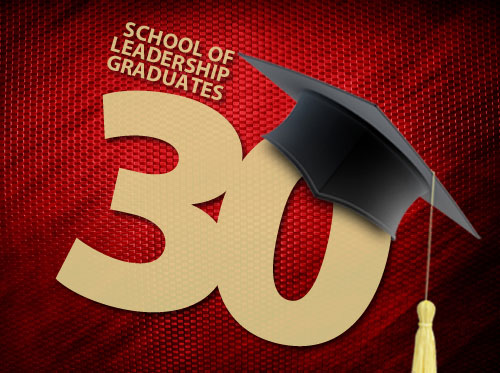 For students like Gaspar Reyes, a native of Mexico who is working in church planting in Shawnee, to graduate from the Robert Haskins School of Leadership is the thrill of a lifetime.

On June 9, Reyes and 29 others walked across the stage during a special commencement ceremony at Oklahoma City, Exchange Avenue, to receive diplomas in various fields of Contextual Leadership Development.

The commencement was the third of its kind. Diplomas from Golden Gate Seminary and the Robert Haskins School of Leadership (RHSL), a Baptist General Convention of Oklahoma (BGCO) program dedicated to training and developing effective leaders and workers of multicultural churches in the state of Oklahoma, were presented to all 30 graduates.

“The BGCO family has been such a blessing to these students,” said Marta Elisa Cáceres, director of the RHSL. “We want to train and educate pastors, church planters and lay leaders to make an impact in their culture, both here in Oklahoma and in many cases, back in their home country,” she said.

“We are so proud of Brother Gaspar and the entire 2012 graduating class,” added Cáceres, who is originally from El Salvador and is a missionary’s wife. “We love the students who come through this program.”

Of the group, four received a diploma in church planting, four in theology and 22 in Christian Ministries. Graduates originate from various countries throughout the world, including Guatemala, El Salvador, Mexico, Puerto Rico and U.S.A.

Oklahoma is a leader in the area of CLD, according to Golden Gate Seminary President Jeff Iorg, who spoke at the commencement ceremony. “Your (nine) centers are making a huge impact and setting an example for all of the country,” said Iorg, who presented an award to the BGCO for its partnership.

The BGCO has CLD centers in Clinton, Ardmore, Lawton, Duncan, Enid, Guymon, Tulsa and Oklahoma City, as well as one overseas in Armenia.

“I have the privilege of being involved in many ministry projects and efforts,” he said. “This day and this occasion in which we see pastors and ministry leaders equipped and able to bring the message of Jesus to their culture is among the most special to me.”