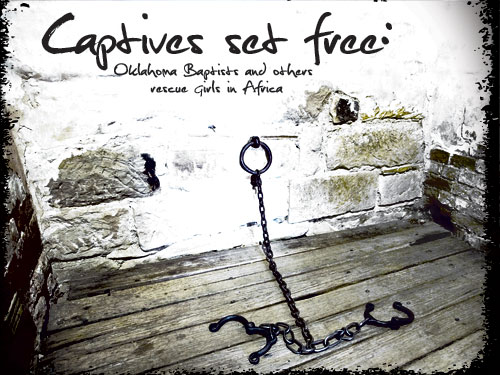 A combination of events occurred to make it possible for these girls to receive a life of independence after being involved in slavery, some since the age of 5.

It started with a T-shirt company that incorrectly printed an order for I.D. Ministries, headed by Courtney Bullard. To correct the mistake, the company gave the Tulsa-based ministry 125 free shirts.

“We were praying about what to do with the free shirts,” said Courtney. “I was reading in the Bible the parable of the talents, and tried to come up with a way to multiply the shirts.”

Bullard’s church, Tulsa, Southern Hills, where her husband, Steve, is youth minister, has taken mission trips to Ghana on an ongoing basis since 2008. While in the country, they were made aware of a practice that goes on there called trokosi.

“It is a small practice in the tribal life with a few thousand girls caught up in it,” said Steve. “Ghana has outlawed the practice, but the law isn’t enforced.”

As Steve explained, back in the deep bush, if someone in a family commits a crime, no matter how insignificant, to pay for the crime, one of the daughters must be given to a trokosi priest, who takes control of her. She becomes a slave to the priest, although he does not take care of her. The family still has to support her.

Steve said the girl may work in the fields, or she may be a sex slave, but if she bears a child, she must take responsibility to care for the child. The priest doesn’t take any parental ownership of the child.

Steve noted that different ministries have tried to strike a deal with the priests and shrine owners to buy the girls.

“Sometimes, they will pay the priests in assets such as cattle to replace income these girls provided,” Steve disclosed. “A lot of the priests want to get out of it. It’s just tradition, they know it’s illegal and they are afraid of getting caught.”

So, Courtney, with the idea of raising money to buy these girls out of slavery, had the free T-shirts printed with “Buy this shirt to help stop slavery.” The shirts, sold last year at Super Summer at Oklahoma Baptist University, cost $15 each. The premise is that you wear the T-shirt with another shirt underneath, and people literally buy the shirt off your back.

“There’s a QR code, which you can run your phone over, and it tells you where the proceeds from the shirt go,” explained Courtney. “We tracked the sales on Facebook, and found the shirts traveled lots of places—Florida, North Carolina, California. It was interesting to see how much each shirt would bring in.”

Through that effort, enough money was raised—about $2,000—to free 20 girls.

Kamie Sager, a member of Ardmore, First, said buying the shirt (actually she bought several) was exciting for her because she felt she was contributing to something that had purpose. She said she took one of the shirts to a retreat, hoping to sell it to one of the students.

“But when no one wanted to buy it, I was crushed,” admitted Sager. “As I was feeling defeated, I discovered one of the sponsors wanted to buy the shirt. When I sold it, I knew we were united as one mind with one purpose, and it was as if I was physically a part of the Body.”

“I believe the shirt is an effective way to raise money as well as awareness,” Ownbey said. “These shirts have been a great way of calling attention to a problem that most people aren’t even aware of.”

Ownbey, also a member of Ardmore, First, said a bill was signed into law during the last legislative session that closed loop holes traffickers often slip through.

“I’m proud to be a part of a legislature that realizes the importance of attacking this issue head on through effective legislation,” he added. “I believe these shirts are a tool in God’s hands to bring about freedom in places that have only known slavery.”

This year at Super Summer, Courtney gave a report every Tuesday night on how much money was raised and told the students that they played a major role in helping to rescue the girls in Africa.

“The place erupted when I told them how they had helped,” said Courtney.

On one of the trips to Africa, the Bullards visited Frankadua Baptist Vocational Training Center, which takes the girls after they are rescued from the priests and gives them a life of independence through a three-year program. The girls are taught about Jesus and educated academically and vocationally.

“The girls can choose a trade, such as sewing, catering or making fabric, and at the end of three years, they are given seed money to help them get started in a career,” said Courtney. “If they become a seamstress, they may be given a sewing machine so they can live independently and don’t go back to the former lifestyle.”

Courtney emphasized that when the girls are taken from the priests, the priests sign a treaty that they aren’t going to get another girl to replace her.

“It’s not like you are feeding the system,” Courtney said. “They are very superstitious about appeasing the gods, so they believe if a transaction is made for the girl, the debt has been paid, and the priests are happy.”

Steve said negotiating the girls away from the priests is a fluid and ongoing situation.

“So far, we have eight girls who have been rescued and we are working on 12 more,” he said.

In all of this, the Bullards said the Lord has given them a vision of building a home modeled after the home in Frankadua.

“We already have the land and plans for the building drawn up,” said Courtney. “We are now in the fund-raising process.”

The new ministry—called Pearl House—is from the parable of the merchant who sold all he had to purchase the pearl, Courtney said.

She said when she was in Winneba, Ghana, where the home will be built, last March, she realized they were going to have to have an American living in the house.

“I didn’t know anyone who would go to live in Africa,” she said. “But God did.”

Steve took some of his youth on a mission trip to Memphis, Tenn., and met a youth minister, who is 33 years old and single.

She told Steve that God told her she was to move to Africa and work with teenage girls, and there would be some sort of home she would be living in. She didn’t know what that meant until she met Steve.

Courtney said Steve is currently looking for a house to rent so they can begin taking in girls while they are in the process of raising funds to build Pearl House. She said they are looking for churches and individuals to partner with them or sponsor a girl.

“We also need people willing to donate items to furnish the home once it’s built,” she said.

“We have collaborated with Kairos10 (www.kairos10.com),” said Courtney. “With each bracelet sold, a mosquito net is purchased and profits go the Pearl House.”

Also a percentage of the sale of The Same Page Book (www.thesamepagebook.com) that Courtney coauthored with Shauna Pilgreen, will go to the Pearl House.

She added that the “Buy This Shirt” campaign will be kicked off again in 2013.

For more information on rescuing the girls or on Pearl House, contact the Bullards at info@idministries.com.