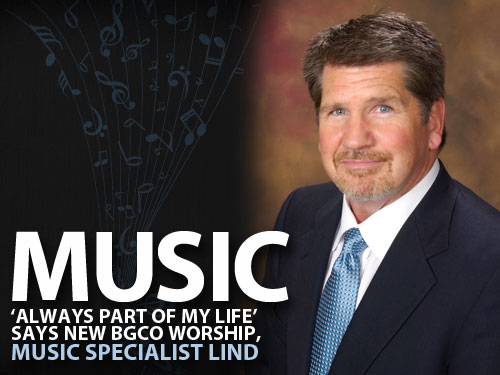 “Music has always been part of my life,” said Randy Lind, who has been named worship and music specialist for the Baptist General Convention of Oklahoma.

“My mom was my high school band director and teacher, while my father was a pastor,” said Lind who most recently served as the associate pastor for music and worship at Oklahoma City, Southern Hills.

“I believe music is a wonderful expression and way of our honoring the Lord with all our heart, mind, soul and strength,” he said.

“Randy has served congregations of all sizes and brings a vast array of experience, education and vision into this key role,” said Anthony L. Jordan, BGCO executive director-treasurer.

Lind begins work at the BGCO on June 25. He follows Ken Gabrielse, who left the post last Spring to serve as dean of the Fine Arts School at Oklahoma Baptist University (OBU).

“We are grateful the Lord led us to Randy. Among his varied responsibilities, he will lead the Singing Churchmen of Oklahoma, which represents so many in the Oklahoma Baptist family,” said D. Scott Phillips, leader of the BGCO Church & Family Equipping Team. “We are going to continue having the current individual directors for the Singing ChurchWomen and Oklahoma Baptist Symphony. Bart Morrison and Michael Raiber have both agreed to continue in their very successful leadership roles for those groups.”

Lind holds a doctorate of ministry from Northern Baptist Seminary in Lombard, Ill. He obtained his master’s degree in choral conducting from Pittsburg State University in Pittsburg, Kan. He earned his Bachelor of Music Education at OBU.

Lind and his wife, Susan, will celebrate 35 years of marriage in July. They have two sons. His elder son, Christopher, is a graduate of OBU and also the University of Oklahoma School of Law. Christopher’s wife, Blaine, is also an OBU graduate. Lind’s younger son, Erick, is a student at OBU and plans to be a children’s minister.

“I am honored and grateful for this unique opportunity to serve Oklahoma Baptists,” Lind said. “The thing that is really exciting to me is being able to partner with men and women throughout the state who are leading in worship and look for ways to encourage and assist them.”

Lind will oversee the worship and music office of the Church and Family Equipping Team, which exists to give assistance to and provide training for music leaders in Southern Baptist churches in Oklahoma. The office’s work is accomplished in part through events and performing groups, including the Singing Churchmen of Oklahoma, the Singing ChurchWomen of Oklahoma, the Oklahoma Baptist Symphony and Resonate, an annual worship arts event for students who have completed 9th-12th grades that covers training in all areas of the worship and music ministry.