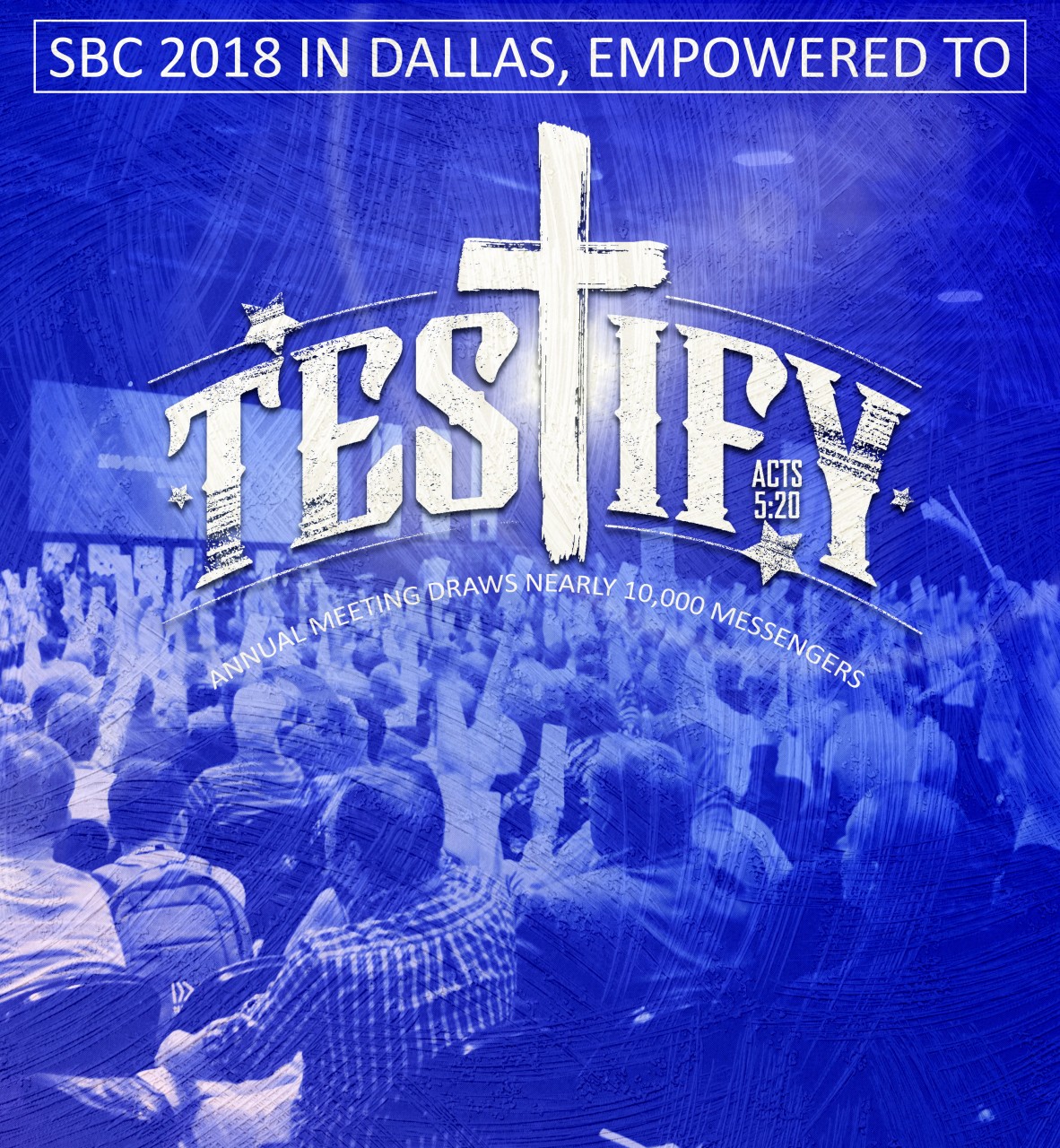 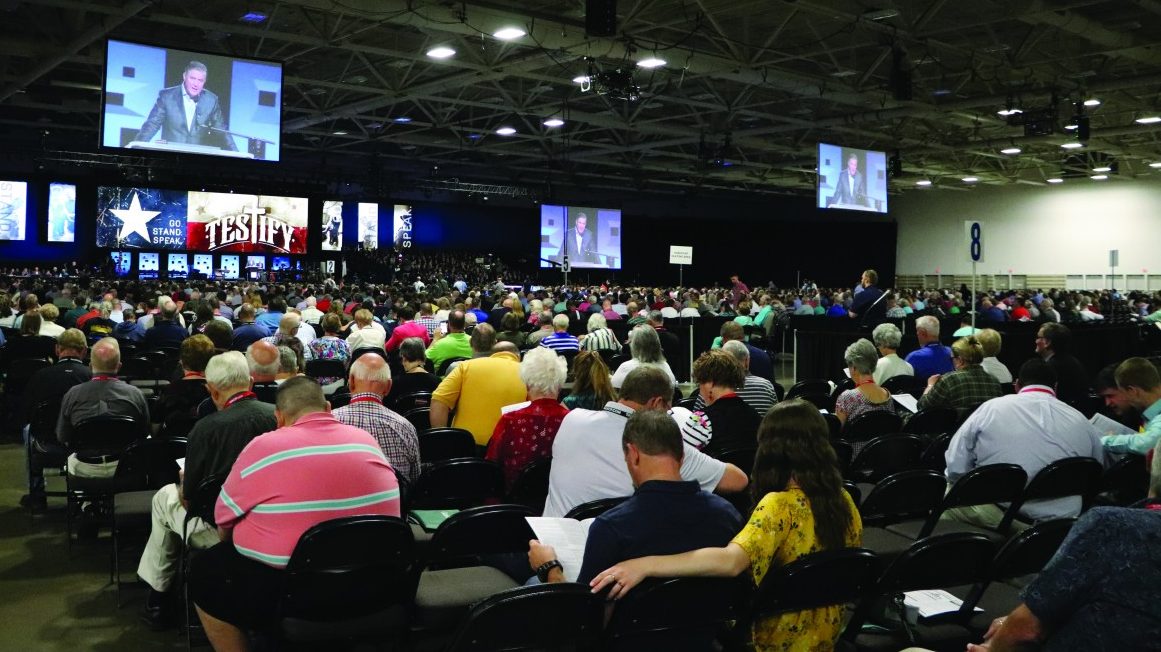 Messengers filled the convention center and heard SBC President Steve Gaines, on screen, give his address.

SBC President Steve Gaines, pastor of Cordova, Tenn., Bellevue, emphasized the meeting’s theme in his address. “Stop talking about how big your problems are, and start talking about how big your God is,” he said.
Completing his second and final year as SBC president, Gaines said Southern Baptists need to believe and trust in the supernatural abilities of God as the key to overcome obstacles.
“What is going to be the solution to our decline? What can God do with us? First of all, you have to believe in a bigger God than you believe in right now,” Gaines said. “You need to believe in the God of the Bible and the Lord Jesus Christ.”

///Greear elected as SBC president
On Tuesday, June 12, North Carolina pastor J.D. Greear was elected Southern Baptist Convention president, two years after conceding a closely contested election to lead the denomination.
Greear, 45, who was nominated by Ken Whitten, pastor of Lutz, Fla., Idlewild, received 5,410 votes, for 68.62 percent margin.
Also nominated for president was Ken Hemphill, an administrator at North Greenville University in South Carolina and former president of Southwestern Seminary. He was nominated by Brad Jurkovich, pastor of First Baptist Church in Bossier City, La., receiving 2,459 votes, for 31.19 percent.
A total of 7,884 ballots were cast for president from the 9,467 messengers registered at the time. Fifteen ballots—or .19 percent—were disallowed.
When asked during a press conference whether he embodies the changing face of the SBC, Greear said, “What I don’t think this (election) represents is a passing of the baton where the older 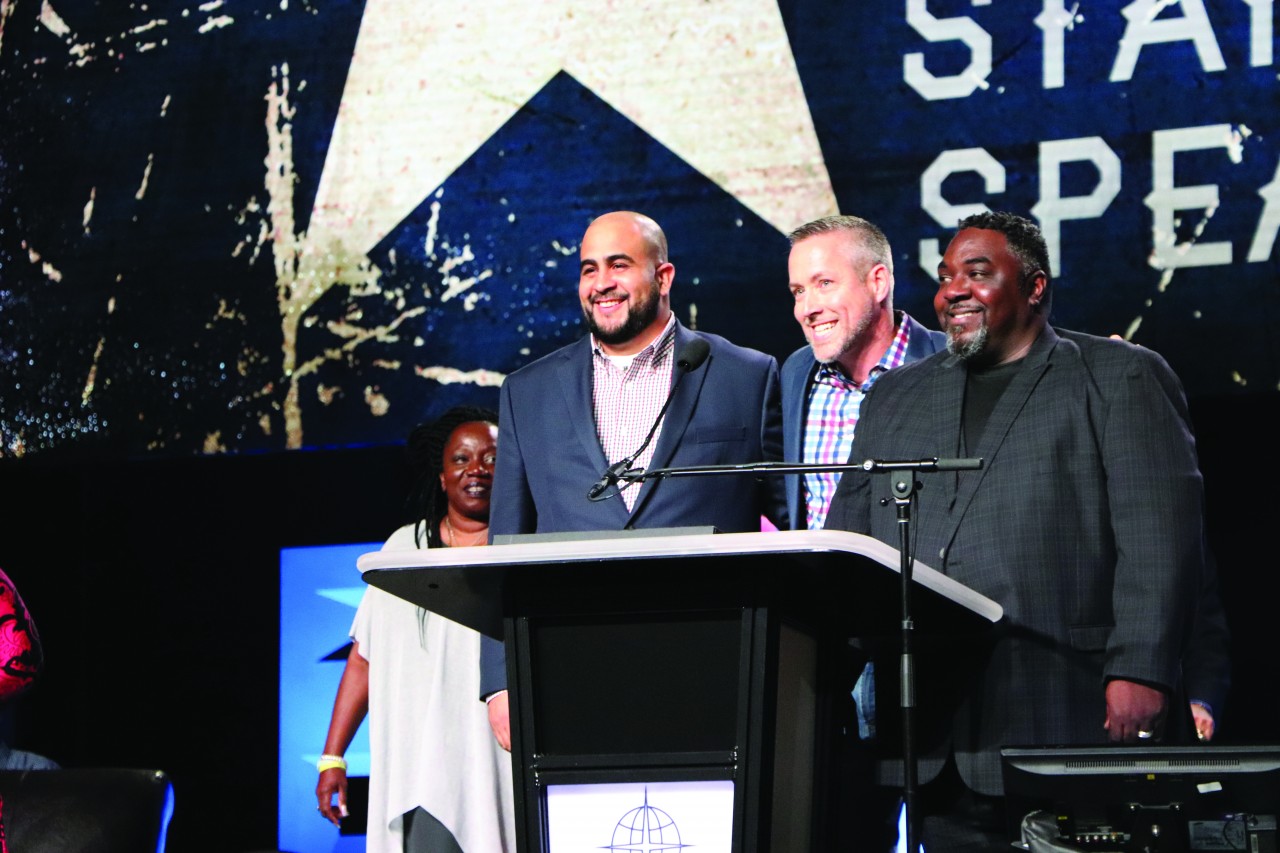 generation fades off into the sunset and the new, young generation is in charge. We walk forward together.”

///IMB missionaries commissioned from every church, for every nation 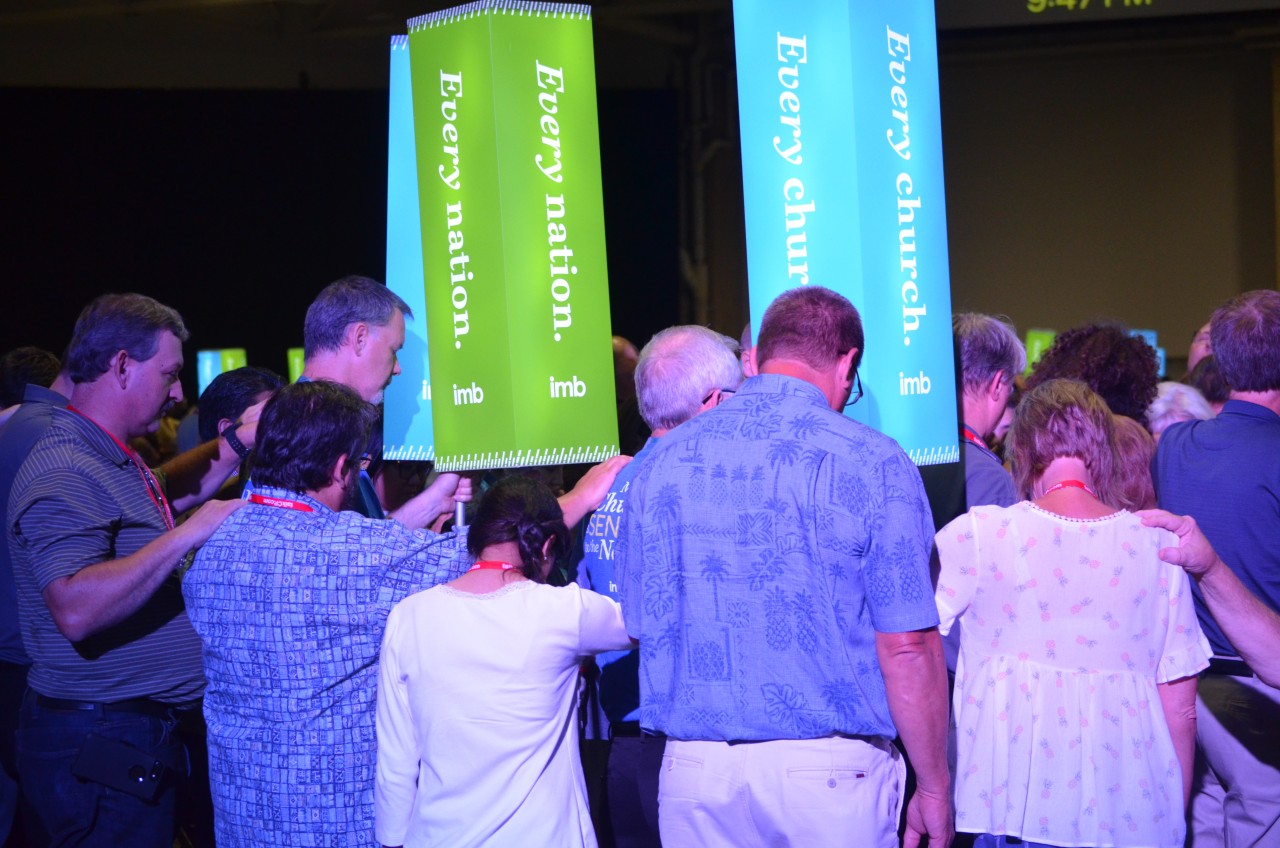 Many gathered to pray over IMB missionaries during a commissioning service.

At a commissioning service, Southern Baptists commissioned 79 new International Mission Board (IMB) missionaries and prayed for all 11,700 people groups in the world.
“We exist to combine the efforts of our churches for the spread of the Gospel in the world,” said IMB President David Platt.
All the missionaries shared testimonies of their calls to missions. Then Southern Baptists gathered around the missionaries and prayed for them.
During a prayer time for the world’s people groups, each attendee of the commissioning service interceded for a people group printed on a card in their seat.

///Ligon commends Oklahoma Baptist Messengers
Joe Ligon, president of the Baptist General Convention of Oklahoma, was pleased with the turnout of 525 Oklahoma Baptists as messengers to the SBC Annual Meeting.
“It seems we have a good contingent of Oklahoma pastors, and I’m glad to see that,” Ligon said. “I’m glad to see our Oklahoma guys involved in the national level. I want to encourage them to continue that.”
Ligon, who serves as pastor of Marlow, First, knows it’s important for pastors and church leaders to make their respective churches their first priority, but he said Oklahoma Baptists should be involved in what is happening in Southern Baptist work across the country and the world.
“It’s one thing for us—and a necessary thing—to take care of our local churches. That’s job one,” he said. “Then we have the opportunity to work associationally and in our statewide convention. That’s critical ministry. Nevertheless, we are a national organization—actually international—so the more voice we can have in the process the better for Southern Baptists in general and Oklahoma Baptists in particular.”

Other reports and recommendations 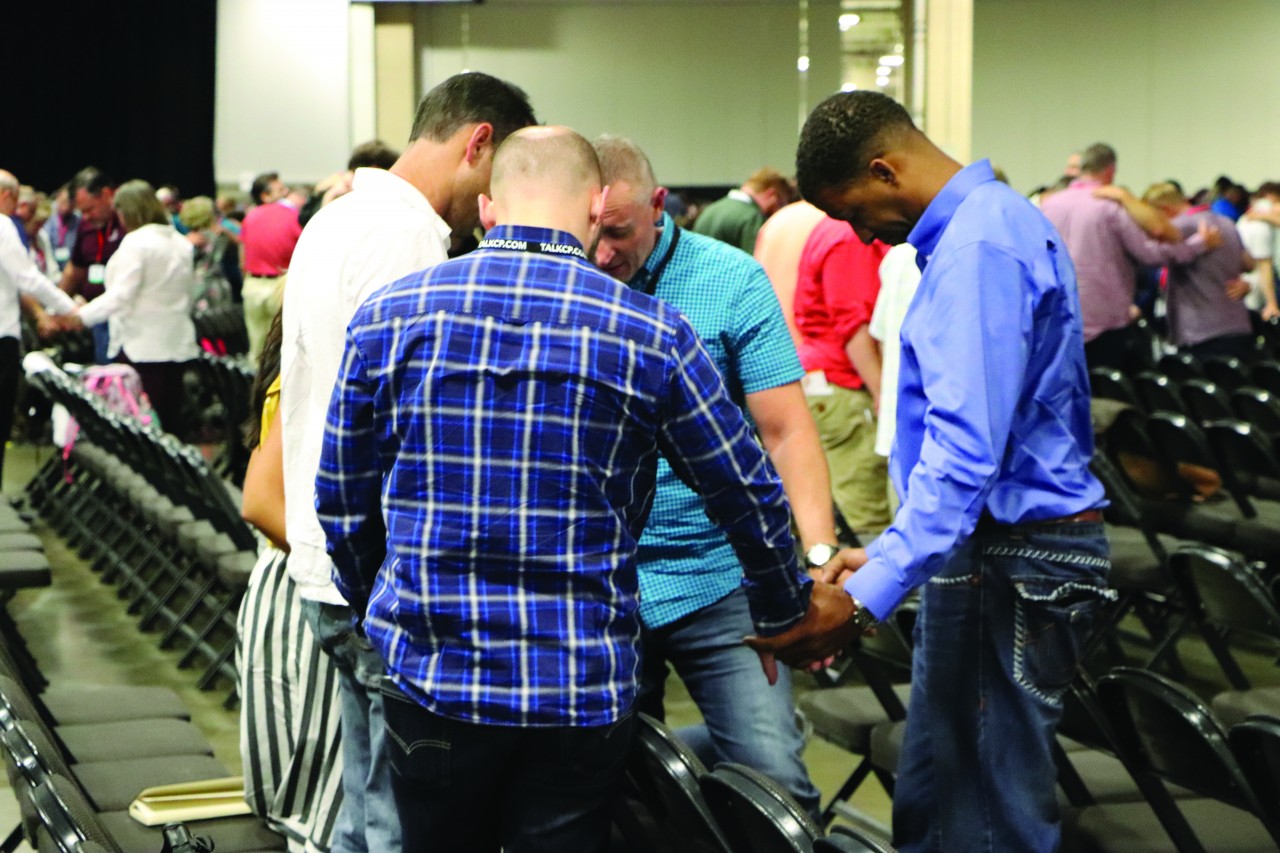 Moments of prayer occurred throughout the Annual Meeting.

Vice chairman Adam Greenway delivered a report from the evangelism task force appointed in 2017 by Gaines at the request of SBC messengers.
The task force’s eight recommendations speak to every level of Southern Baptist life because all Southern Baptists must work in unity to accomplish the Great Commission, Greenway said.
Platt delivered the IMB report. Although Southern Baptists are asking about the IMB’s presidential search as Platt is returning to local church ministry, Platt said the IMB’s work is not about a president, but a coalition of 47,000 churches who support and send missionaries. “They are the IMB, and I want to report this morning on what they are doing,” he said. “If anyone asks you what’s happening at the IMB, you tell them that disciples are being made and people are coming to Christ.”
Kevin Ezell delivered the North American Mission Board report on Wednesday morning.
The Woman’s Missionary Union (WMU) report was delivered by WMU executive director-treasurer Sandra Wisdom-Martin and WMU president Linda Cooper. They shared testimonies of God’s work through WMU’s work of missions and missions education.
Messengers received an update of the search for a new Executive Committee president, with Frank S. Page departing the position in March. Messengers also defeated a proposed defunding of the Ethics & Religious Liberty Commission (ERLC) during the EC’s morning report June 12.
Russell Moore, ERLC president, presented his organization’s report, highlighting, among other ministries, the commission’s efforts to defend religious liberty and teach biblical truth on issues of marriage and gender. He also announced ERLC is partnering with LifeWay Research to commission a study on scope of abuse within churches.
Regarding search for new EC president, SBC Executive Committee Chairman Stephen Rummage said, “We do not have a date set at this time when we will complete our search, but you can be certain that we will be careful and deliberate in our work.”
In other business, messengers passed the 2018-2019 Cooperative Program Allocation Budget of $194 million as proposed.
Messengers also approved the addition of National Day of Prayer on the first Thursday in May to the SBC Calendar of Activities along with Orphans and Widows Care Sunday on the first Sunday of November.
For additional SBC Annual Meeting coverage, including the resolutions committee report and U.S. Vice President Mike Pence speech, see the June 21 print edition of the Baptist Messenger.
The 2019 SBC annual meeting is set for June 11-12 in Birmingham, Ala.