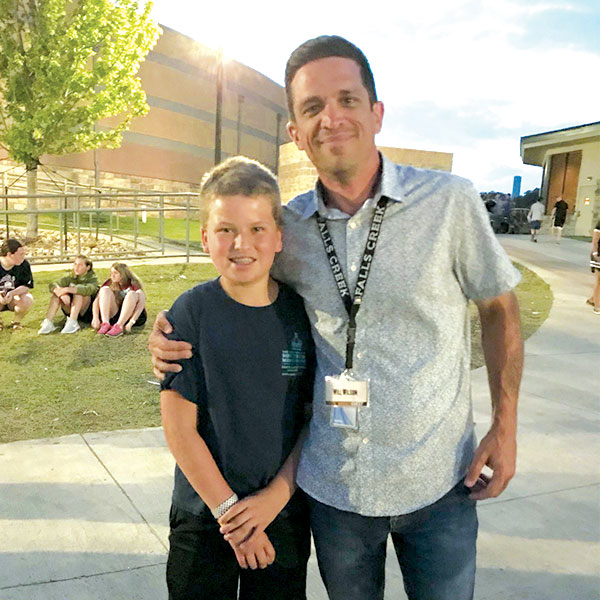 Will Wilson, camp pastor for the third week of Falls Creek, poses with a young camper, Xander, who approached Wilson on Centennial Plaza to tell him that he made a profession of faith in Christ that same evening. [Photo provided]

With three weeks completed and another five to go, the Lord has already moved in mighty ways in campers’ lives.

Each year, as speakers and bands prepare themselves for camp, Andy Harrison, program director at Falls Creek and student ministries specialist for the Baptist General Convention of Oklahoma, challenges each pastor and worship group to get out among the campers and invest in their lives.

“When they take that to heart and go spend time with the people, and people see you and you’re visible, they say ‘Oh you’re a real person, not just some personality I see on the stage.’ It breaks down a lot of walls that might be there, and there’s opportunity to have great conversation and great interaction with people that normally seem untouchable,” Harrison said.

When two Oklahoma natives, Mike Keahbone, pastor at Oklahoma City Cherokee Hills, and Will Wilson, pastor at Tehcumseh, New Hope, preached the second and third weeks of Falls Creek, respectively, they took to heart the challenge Harrison and the Falls Creek staff laid before them.

Keahbone shared some incredible stories of life-change, such as with one church that had not attended Falls Creek for many years but brought four campers this year. Midway through the week, a counselor from that church shared with Keahbone that two of their four campers made professions of faith in Christ. Later in the week the same counselor found Keahbone to share that the remaining two campers also made professions of faith in Christ.

“I said ‘Brother, you will probably be one of the only testimonies all summer that will be able to say that 100 percent of your group got saved at Falls Creek,” Keahbone said.

Wilson was spending time on Centennial Plaza one night in the third week of Falls Creek when a young camper named Xander walked directly up to him. The young man said, “Hi, Pastor Will. My name is Xander. I got saved tonight.”

Each week both pastors experienced salvation story after salvation story. Keahbone, who used to live in Albuquerque, N.M., found out a church from Albuquerque was attending Falls Creek during his week as speaker. When he visited the church’s cabin, he heard two girls singing a song they wrote called, “Royalty.”

“The gist of the song is that you can be beaten and broken in this world, and it’s easy to feel like you’re not worth anything,” Keahbone said. “But then they sang about the redemption of the Lord in the song and how we were meant to be royalty and daughters and sons of the King.”

He paid a visit with another out-of-state church, this one from Texas. At this cabin another girl wrote a song. This camper made a profession of faith in Christ just the night before.

Each morning at Falls Creek, a bell called “Big Bertha” is rung that can be heard across the campgrounds. Each chime from Big Bertha represents a person who made a profession of faith in Christ the night before.

“Hearing the bell, Big Bertha, ring out 60 times this morning at Falls Creek, thus signifying the movement from death to life of 60 souls, was an amazing start to another day at one of the greatest places on earth,” Wilson said on Wednesday of week three.

Keahbone shared his testimony with students about coming from a home of addiction, and how that affected him as he grew up. Students then approached him in droves telling him how they relate to his testimony.

“There were so many students who resonated with that and it would just break your heart to hear how many are coming from broken homes like that,” Keahbone said.

He said for the remainder of the week, because of that, “I made sure every night to look them in the eyes and say ‘God loves you.’ I felt like by the end of the week a whole lot of them believed it.”

One camper told Keahbone about her viewpoint before arriving at camp. “My perspective of church and God,” the camper said, “was basically (for) these families who had a good mom and dad. That’s who God was for. He really didn’t want or like people like me.”

“I made my message address that issue on Friday night and said all God has ever worked with are broken and messed-up people. We were born with a sin nature that makes us all damaged and broken from the get-go, but He loves us,” Keahbone said.

He finished the week telling students about this childhood, not growing up with people telling hi

m how to be a godly husband or a godly father. He said, “I got into the Word and found every verse I could about those things and learned what God said. The Word of God is sufficient. You’re not helpless. You’re not hopeless.”

Harrison, who has served on Falls Creek’s program staff since 2000, said along with pin trading, a popular Falls Creek passtime, year after year his favorite thing about camp is, “The ability to take every conversation to a spiritual place and hear campers tell me the best thing they’ve learned at camp that week. It never gets old.”