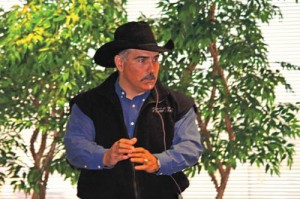 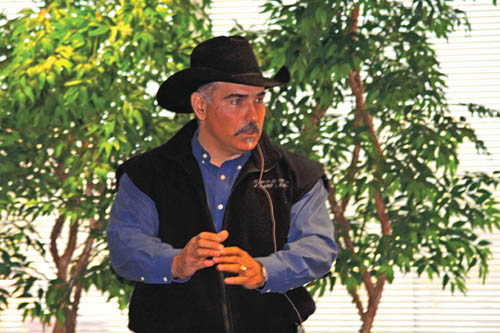 Coma-ti yi yippy, yippy yea! Instead of drifting along with the “Tumbling Tumbleweeds,” Oklahoma cowboys now can have the security of being a part of a Christian family. In the past year, 18 cowboy churches have been started, with four more in the process, bringing the total number in the state to 23.

Toma said he was told to preach like he does at his church, but he said, “That’s not possible, because I preach on a horse.”

Toma was functioning on two hours sleep because he had spent the night at a Dallas hospital with the family of a student who was severely injured in an accident involving a school bus and a semi.

“Last night was wonderful,” Toma said. “A man who had never been to church, and knew nothing about Christianity told me he wanted to give his heart to Jesus. He had been bringing a young boy to church with him, and last night, this young boy was lying in a hospital and we didn’t know if he would live.”

Toma said he and his wife, Diane, prayed all the way to Dallas. The boy is expected to make a full recovery.

“His family isn’t going to church,” Toma said of the injured student. “This is going to make a big difference.”

In a seminar following the worship service, Sam Scott, associate church planter for the Baptist General Convention of Oklahoma, said the cowboy church is a movement of God the convention has tried to catch up with.

“A couple of years ago, I became fascinated with what I was seeing, and began to pray how we could attach on to it,” he said.

He added he got together with Toma, who was willing to start a church, but didn’t know where to begin.

“I told him to just ‘pull the trigger,'” Scott revealed.

“The purpose hasn’t changed, but we have to have different approaches,” he said.

Toma pointed out that 84 percent of the population isn’t in church on Sunday.

“Where are they?” he asked. “We need to create places for them. The cowboy culture is large in Oklahoma. They can come filthy, come fancy, it doesn’t matter.”

Toma explained that the cowboys have never been a part of anything like this.

“It’s a Christian family,” he said. “They don’t come, sit, listen and leave. We have to have activities for them, such as play days and goat rodeos.”

Toma said every culture has aspects that are challenging, and two of those among cowboys is language and drinking.

“With the language, we have to let a few things slide,” he commented. “But we point out that they are an influence to others. Drinking is a problem we’ve had to confront. We try to explain about drinking to excess and show them they are bringing their brothers down. They bring habits, and we have to be patient while they are learning.”

Toma said the average person coming to Christ in the cowboy church is a 50-year-old man.

“We could start 50 new works a year if we had 50 church planters,” Scott declared.

One of the things that is desperately needed is material for discipling new believers.

“We need a Bible study for cowboys,” Toma said. “It can’t be fake. These people are real, and they get offended if you try to pull the wool over their eyes.”

Toma, who trains cutting horses as his full-time job, is leading a discipling class on cutting. The cowboy churches also have small group ministries, which include Bible studies, but something that relates more to the culture is needed, Toma said.

Also needed is a cowboy preacher seminar or school for training.

“You can’t take a traditional preacher and put him in a cowboy church,” Pipkin said. “It won’t work.”

“We are dealing with working cowboys who, in their minds, have no other place to go,” said Toma. “We aren’t trying to grow cowboys; we’re trying to grow Christians in this culture. We do everything different but change God’s Word.”