Rite of passage: Happiness is overrated

After being a grandparent for six years, I am losing my touch when it comes to keeping my grandsons happy. It was easy when I only had one; it was challenging with two; and it is impossible with three. I don’t even want to think about it with a half-dozen.

Of course, I’m talking about keeping my grandsons happy when they’re all together. I am more successful when only one grandson visits. I know that child’s interests, his likes and dislikes, and we can play accordingly. Whenever the second joins us, whatever the first child likes, the second dislikes, or else they both want to play with the same toy at the same time. Even though we have 10 identical toys, each child only wants what the other one has.

The other day, the Yada Hoodies came over to swim and jump off their new jumping dock. I had just repaired their vinyl pool; it had several leaks, and I fixed it with some of that tape used to hold submarines together. Using this tape is a challenge because you break more commandments just getting the wrapper off than when opening a new jar of pickles.

Trying to make sure the pool didn’t leak for the summer, I taped the floor seams, the side seams and anything that looked like it would leak. The boys jumped in and started splashing in their newly repaired pool. When they climbed out—horror of horrors—their toes were stuck together. An adhesive that worked just like Super Glue was stuck in their hair and onto their hands, kneecaps and places I don’t want to mention.

I wasn’t sure where this glue came from, but using my best detective skills, I discovered that the chlorine had dissolved the top side of the submarine tape, leaving only the gray sticky stuff exposed.  The boys had been stepping, jumping and kneeling on it. It took me over an hour of scraping and a gallon of “Goof Off” to separate their toes and clean the bottom of their feet so they wouldn’t stick to the sidewalk and everything else.

Of course, I had to close the pool until I could solve this problem. The two older ones, Titus the Honorable and Cohen the Goodhearted, whose hearts were set on spending the day in the pool—let’s just say they weren’t happy. Their Uncle Jeremy had texted to ask for a new picture of the three boys together, but we could only get 1/3 of the Yada Hoodies to smile, so that explains the photo you see here. 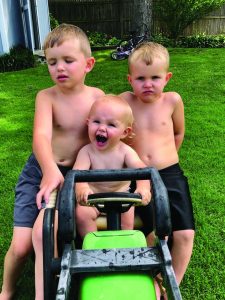 I am sorry your pool had a malfunction. I knew you were unhappy and disappointed that you couldn’t spend the rest of the day swimming. I hate to tell you this, but you will have 1,001 more disappointments before you reach your next birthday.

Life is not always going to go your way. I went to the store last week to get a package of ground beef, but they were sold out and haven’t gotten any since. I was disappointed, but I was not unhappy.

Many people connect disappointments with being unhappy. And people like this walk around with frowns on their faces and unhappiness engraved across their hearts.

Two things will bring you disappointment: people and circumstances. There was a man named Moses who became disappointed with the very people he was trying to help. They didn’t understand and started grumbling against him. Moses was also disappointed in his circumstances; he grew up in the king’s palace and later became a shepherd. He then spent 40 years wandering around a desert.

I would like to share a couple of things that will help you along in life. One, sometimes disappointments just happen. I didn’t plan for your swimming pool to transform into a tub of Super Glue. I wasn’t planning to spend part of my morning scraping the yuck off of you from head to toe.  It was a circumstance beyond my control.

Two, I disappointed you. Your motto has been that when anything breaks, “Poppy can fix it.” The older you get, the more disappointed you will be that your Poppy cannot fix it. It isn’t because I don’t want to; it’s because there are lots of things I can’t fix.

Yesterday, two things came together: circumstances and people. If you let these two things control your emotions, you will be at their mercy. That is why we must place our happiness and joy solidly on Jesus. He will never disappoint you. If you do that, you can live out 1 Thess. 5:16, “Rejoice always” and be disappointed without being unhappy.

No matter what happens with the pool, my dear Yada Hoodies, stay stuck on Jesus. He’ll never let you go.