Rising from the ashes: Weatherford church perseveres after fire 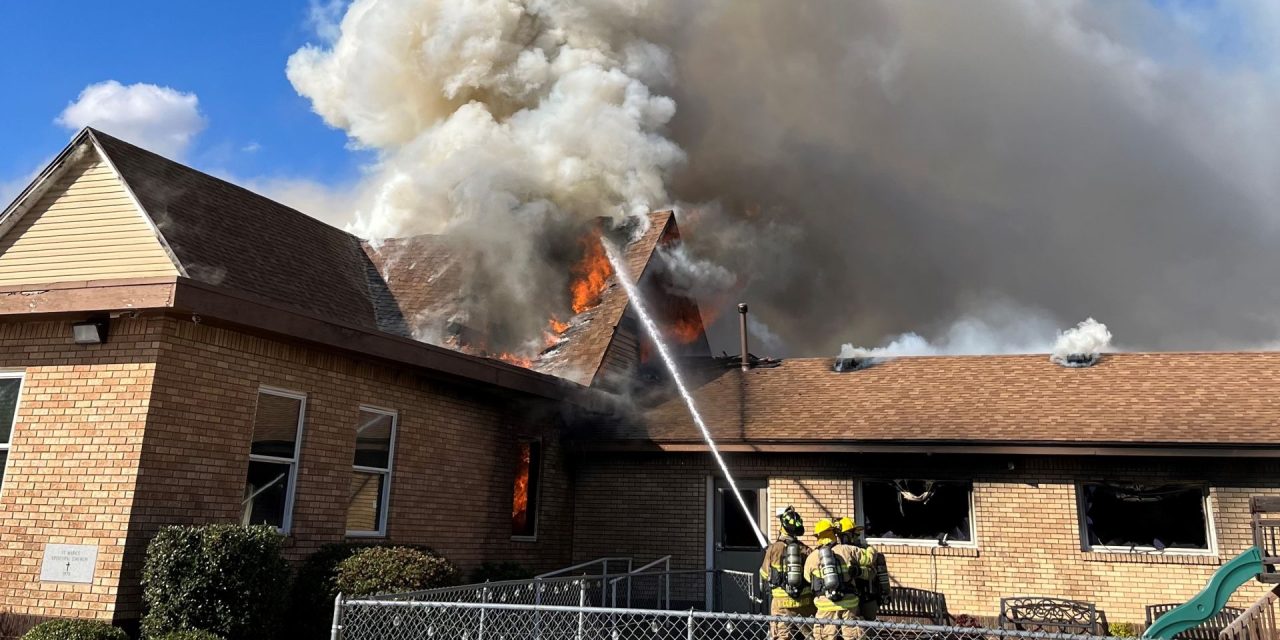 Pastor Skylar Spradlin of Weatherford, Trinity said it was “an ordinary day” when he and another church staff member discovered a fire that broke out in the church’s sanctuary Nov. 1, 2022.

“We were working, and I’m glad because if worship pastor Larry Jones hadn’t been there, I would not have known anything had happened from my office until it was dangerous,” Spradlin said.

Spradlin first saw a flicker of fire in the ceiling above the platform in the sanctuary, before realizing smoke was filling the sanctuary. “I went to grab a fire extinguisher,” Spradlin said, “and by the time I returned, the fire was already over our heads and spreading so fast.”

In the hours following the devastating fire, Spradlin said they received great encouragement from the Weatherford community, as well as Oklahoma Baptists. 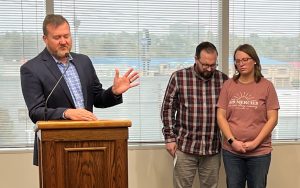 The very next day, Todd Fisher, Oklahoma Baptists executive director-treasurer, expressed support for Spradlin and his wife Jamie, publicly presenting the church with a $5,000 check from Oklahoma Baptist Disaster Relief to help defray costs associated with the fire.

Fisher also gathered Oklahoma Baptists staff members to pray over the couple at the Baptist Building and announced that another pastor who is retiring had offered Spradlin his entire pastoral library, since Spradlin’s was lost in the fire.

Spradlin, who has served as lead pastor at Trinity since 2015, notes that the church is celebrating its 50th anniversary. Though the building may be gone, he said the church’s ministry will continue. 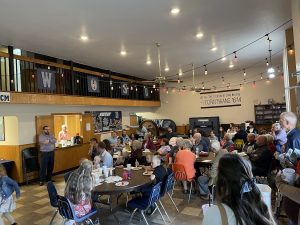 The congregation is still holding Sunday services, meeting at the Baptist Collegiate Ministry building at Southwestern Oklahoma State University. Sunday worship attendance has remained strong, with an average attendance of 75.

In an open letter of gratitude to Oklahoma Baptists, Spradlin said, “Some events are life changing. They leave an impression that does not go away… Our church building caught fire. All that was left were a few books and some financial records. In a matter of minutes, our congregation effectively became homeless.”

He went on to say, “For the first time, our people were experiencing what many other churches around the world experience regularly—an uncertainty about the future, confusion about the present and a strange sense of sorrow at something we know to be unnecessary to the work of the Gospel. 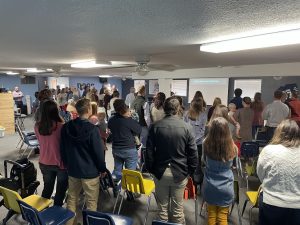 Sunday worship attendance remains strong for Trinity with an average attendance of 75.

“Unlike many church plants, our people had never existed in a temporary space or in a state of extreme flux. Yet, this is where we are now.

“While the fire was of monumental importance to our emotional, physical and spiritual outlook, it is not what has left the biggest impact—at least not on this pastor. Instead, it has been the kindness of God’s people poured over us in the days since that has made the deepest mark.

“Such motivational kindness has been sustaining as we navigate a road we have never travelled and make decisions we were never prepared to make. In fact, if it weren’t for the kindness of sister churches and ministries, we would be in much worse shape. Yet, sister churches and partnered ministries have gone above and beyond to strengthen and sustain us.

“As Baptists, we always talk about unifying around missions. We rally to our missionaries and prioritize spreading the Gospel. We can confidently say that the mission of spreading the Gospel to the whole world is the singular glue that holds us together. I have often heard that our unity is for one purpose—fulfilling the Great Commission.

“Many sister churches, and many individuals, have rushed to our side in our time of need. They have given money. They have allowed us to borrow equipment. They have prayed for us. They have given us space to grieve and promised to come to our aide in the future.”

Spradlin continues to notice God’s provision as the church works through insurance claims and other issues. “God provides daily reminders that He is going to take care of us,” he said.

This trying time for Spradlin and Weatherford, Trinity shows that even when fires destroy a church building, the church can rise from the ashes and still be part of advancing God’s Kingdom.