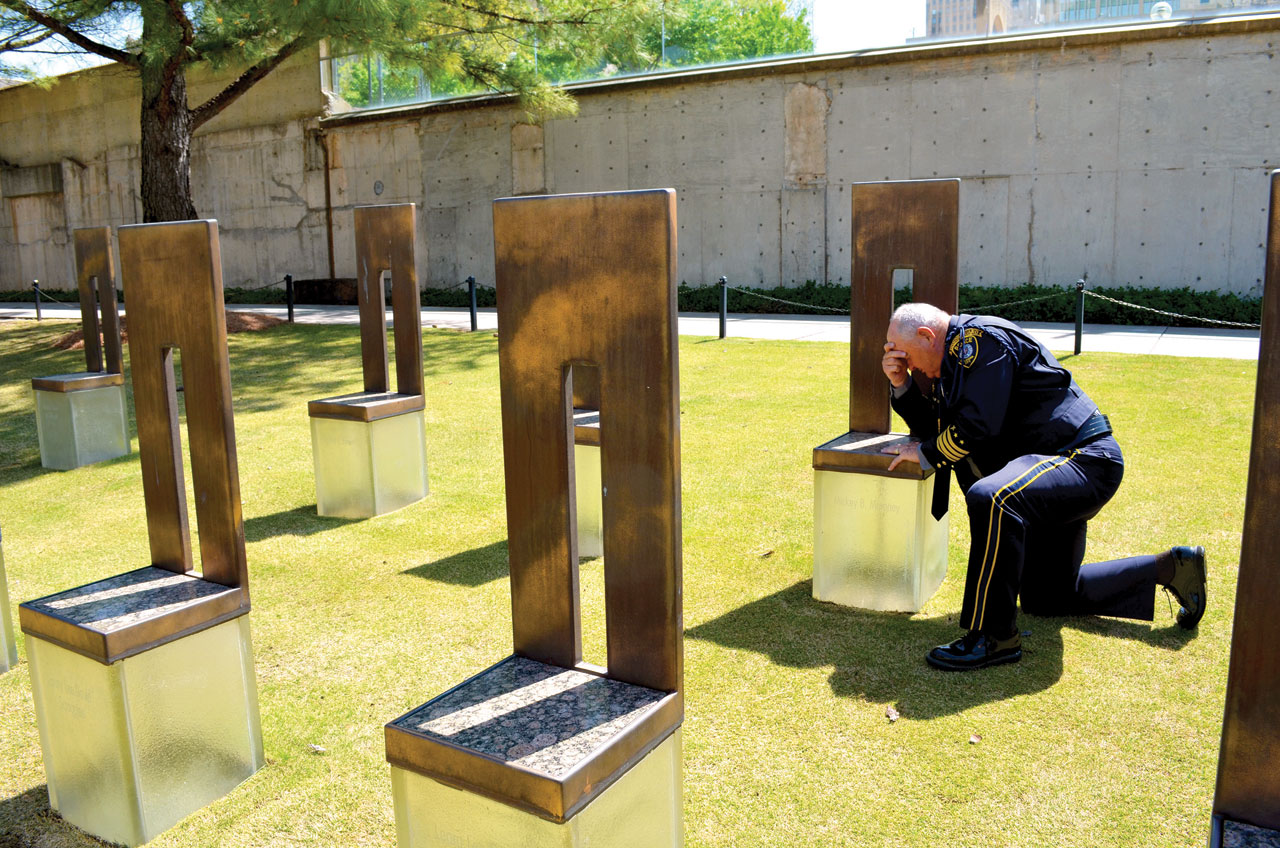 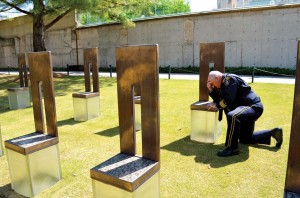 Jack Poe prays beside the memorial chair for Secret Service Agent Mickey Moroney, who was killed in the Murrah bombing (Photo: Bob Nigh)

Oklahoma City Police chaplains Jack and Phyllis Poe weren’t inside the Alfred P. Murrah federal Building when a truck bomb exploded outside at 9:02 a.m. on April 19, 1995, but the after-effects of that explosion nearly tore their marriage apart.

“One of the things we really didn’t understand is, as caregivers, we want to make a difference, but we didn’t realize that you can give yourselves away. And, Phyllis and I gave ourselves away,” Jack said recently, reminiscing about the tragedy as its 20th anniversary approached.

“The two weeks before it happened, we had (attended) seven funerals,” Phyllis recalled. “We were in the office, and I started crying. I said, ‘God, please, no more funerals, we can’t do this, we’re too tired.’ So, we were spent before we ever got to the bombing. And then, the bomb went off. We spent 21 days at the bombing site.”

“On April 19, we were getting dressed to go to the funeral of the parents of one of our officers,” Jack said. “When the bomb went off, our house was 8.5 miles away at NW 36th and Meridian Ave. in Windsor Hills. I thought something in our house had exploded.

“Then, I thought an airplane crash had caused that massive boom. So, I went to the car and checked our (police) radio and, finally, someone said they thought it was the federal building downtown.

“I left, and Phyllis said she would follow me later. I pulled in behind one of our (police) units and followed him downtown.

“The first damage I saw was the Fred Jones Lincoln dealership about four blocks away from the Murrah Building, and the cars looked like they had been beaten with sledge hammers. There was glass all over the place from the big plate glass showroom windows that had been blown out.

“When I got to the Regency Towers Apartments, I parked my car and ran up the street. I never thought it was a bomb, but when our police officers who had been in Viet Nam smelled the ammonia, they knew exactly what happened and that it was a bomb. The sight of the building was devastating.” 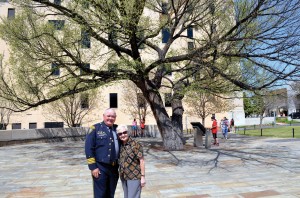 Jack and Phyllis Poe pose in front of The Survivor Tree, an American Elm that stood in the parking lot of the Journal Record Building, now the Oklahoma City National Memorial, shown in the background. (Photo: Bob Nigh)

Jack knew chaplains were going to be needed—and in huge supply—so he called Joe Williams, chaplaincy specialist with the Baptist General Convention of Oklahoma and an FBI chaplain.

“When I got down there, Joe wasn’t there, so I called him. He was at the Baptist Building,” Jack recalled. “I told him we needed him down there.

“We met in front of the building, but got separated pretty quickly. The chief sent me to the initial command post, which eventually they moved two or three times. Then, I got a call to go to the First Methodist Church. They said, ‘We have some bodies there and you are needed.’

“The reason was one of our veteran homicide detectives had gone in there, and he had left, saying, ‘I can’t take this.’ They wanted me to find him and see how he was doing.

“The second lasting image in my mind is walking in there and seeing three adults and five children laid out in (the church’s) vestibule. The bodies eventually got moved to the back of the church, where they set up the temporary morgue before they sent them to the medical examiner’s office.

“That’s when I walked in and saw the bodies, and that is burned into my memory. The first image was the gaping hole in the side of the damaged building, and then those bodies.”

Jack said he then started searching for police officers who walked a beat in the area.

“I was afraid we had lost some of them, especially one named Bob,” Jack said. “He was a big man, kind of a private, shy guy. I finally found him about 10:30 a.m., and he grabbed me and gave me a big bear hug. He said, ‘Chaplain, I have coffee in that building at 9 a.m. every morning, and I got up to go to work this morning, and the kids had the car last night and like most kids do, they brought it home empty last night. I was filling the car up with gas this morning when the bomb went off.’

“I told him how happy I was that he wasn’t in the building at the time, and I turned to leave, but he grabbed me again, and said, ‘That’s not all of the story.’

“He said, ‘I have two grandkids who stay in that nursery.’ My knees almost buckled at  that point after having seen those children at the church. But, he said, ‘They weren’t here this morning. They woke up sick, and their momma kept them at home.’

“I told him I was glad he was OK and that his grandkids were OK and I assured him, ‘We’re going to work through this.’”

Jack said he continued to work down in the damaged building and check on other people until someone said someone else had shouted, “There’s another bomb!”

“But, I heard the building was coming down, and they started having people run out,” he said. “I joined with our officers helping people get out, and I thought this might be it, and I prayed, ‘Lord, if this is it, please take care of Phyllis and the kids.’

“That was probably the third image that has stuck with me. If the building had come down, there was no way I was going to make it out, even if I had tried.”

Phyllis, meanwhile had been put in charge of helping to coordinate the chaplain response to the tragedy. Setting up a “Chaplain’s Corner” in the parking garage of One Bell Central, she eventually compiled a list of 255 chaplains—including 27 military  chaplains, because Jack was state chaplain for the National Guard at the time as well—who showed up to minister to the victims, survivors and first responders.

“Working for the state fair all those years really prepared me,” said Phyllis, who had managed the State Fair Chaplain’s Corner since 1990.

“I just went into my mode as manager of the Chaplain’s Corner, and I told people how to do it and what to do and so on. I asked Joe where the Chaplain’s Corner sign was, and he said he thought it was in his car, so I asked him to go get it and we put it up behind us on the wall. From then on, that was the chaplain’s headquarters, where they could get coffee and snacks. God had prepared me for that, because I wasn’t one to delegate things.”

The Poes worked tirelessly in the weeks, months and years after the bombing, pouring their hearts and souls into the lives of others. The smiles on their faces and the ubiquitous hugging masked their anger and the bitterness of not being able to forgive the perpetrators of the horrendous crime eating at them inside, and that eventually led to an unstable marriage.

“I didn’t know where to put my anger. I had a lot of anger. Anger that people were hurt; that people died. Anger that our lives were changed within seconds, because you’ll never be the same,” Phyllis confessed. “No matter where we go, what we do, we talk about the bombing. It comes up somehow. Before the bombing, after the bombing. It’s one of those markers in your life.

“I was never allowed to show anger growing up. My mother and daddy were very passive. So, I had all of that anger bottled up inside of me, and I didn’t know what to do with it. He (Jack) got it. I couldn’t take it out on anybody else. I was angry and angry and angry, and didn’t know what to do with it. It got to the point that we were fighting a lot.

“Finally, we were going to a survivors’ meeting at the State Capitol one night, and I didn’t want to go and said, ‘I just feel like the first person who asks me for another hug, I’d just as soon slap them.’ I knew then I was in trouble, because I love people, and I’m a hugger.

“I had to deal with forgiveness, because I didn’t like (Convicted bomber Timothy) McVeigh and I didn’t like (Co-conspirator Terry) Nichols,” added Jack. “We were at Grapevine, Texas, First during a break in Nichols’ trial in 1999, and the preacher was speaking on forgiveness. He mentioned the bombing and McVeigh and Nichols, and he said if they had repented, God would forgive them. I got up and walked out.

“I sat outside, and my 15-year-old grandson came out and knew something was going on. He came out and just let me cry on his shoulder.

“I finally had to come to the realization that forgiveness is not for McVeigh or Nichols, it’s for us. Booker T. Washington, I think it was, once said, ‘I’ll never permit a man to reduce me to hate, for the moment I hate him, I become his slave.’

“So, I really thought that I needed to do that (forgive) because it would allow me to minister to those who haven’t forgiven. And, I knew that if I didn’t let it go, it would continue to eat at me.”

Things came to a head in 1999, and the Poes were “saved,” by Joe Williams, who arranged for them to attend a compassion fatigue seminar in Florida.

“Joe came to the house, and had airplane tickets to Florida for us to go see Charles Figley,” Phyllis said. “We thought we were going to a big conference on something called Compassion Fatigue. But, when we got there, the conference was just the two of us. Joe, along with the Lord, saved our marriage by coming over and loving us.”