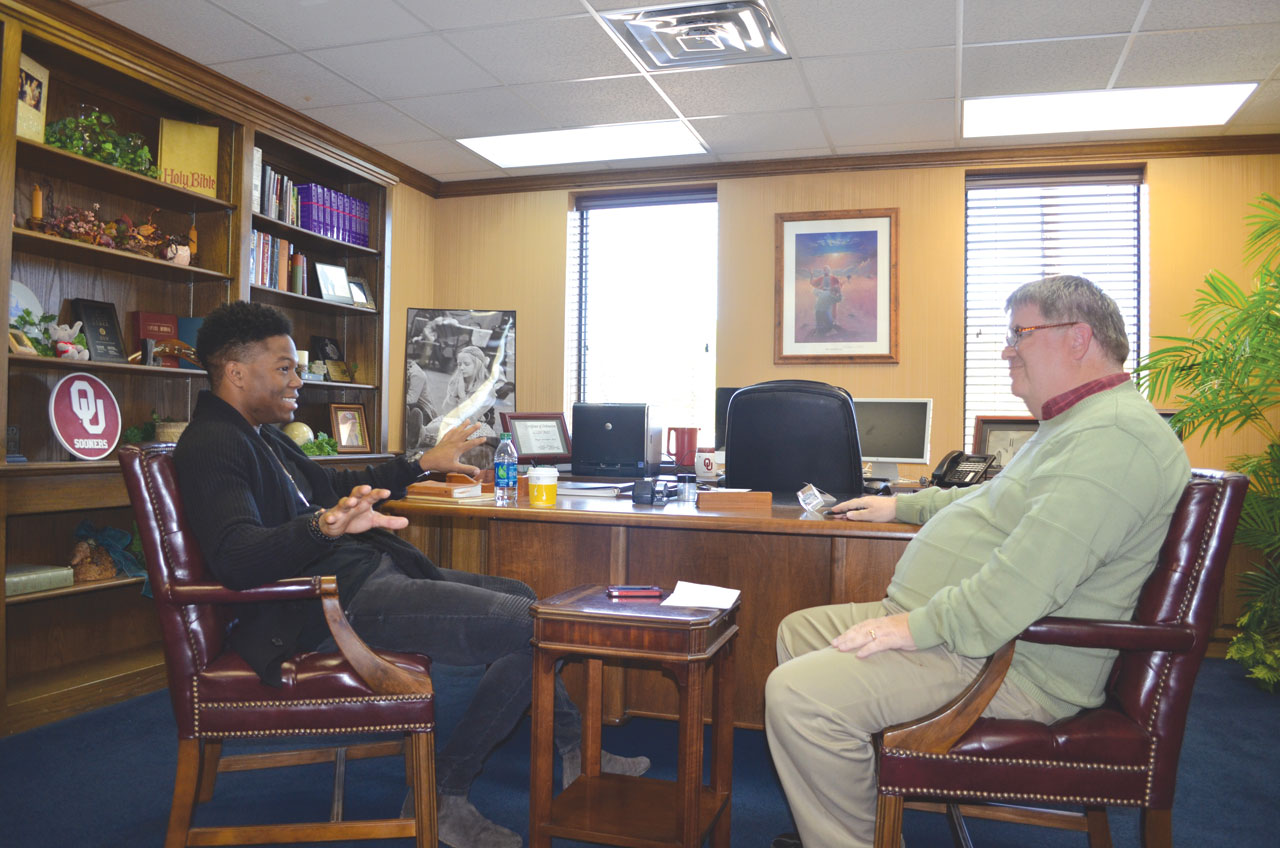 DUNCAN—Caleb Castille plays Tony Nathan in the Christian-themed movie “Woodlawn.” He and his father Jeremiah Castille were special guests at Duncan, First, Nov. 1.

Jeremiah, a former NFL player and ordained minister, preached during the morning service, while Caleb spoke at a Sunday evening event after Duncan, First hosted two afternoon showings of “Woodlawn” that attracted more than 600 people in Duncan and surrounding communities. Bryan Pain, pastor of Duncan, First, said six people made professions of faith during the evening event.

The Baptist Messenger spoke with Caleb about “Woodlawn,” his film debut, and his life since the movie has been released.

Messenger: What makes this movie special for you?

Messenger: This movie reflects a difficult time in our country. How can what happened at Woodlawn High School in the early ‘70s relate to what is happening in our country now?

Castille: You have a lot of the same issues that are going on now—racial and social issues that leave a bad taste in peoples’ mouths. You have to look at the story and see how the people during that time faced those issues and resolved those issues. They looked to love and peace and forgiveness. There’s a lot to learn from them.

Messenger: What do you take from working with actors such as Sean Astin and Jon Voight?

Castille: Both of them (Astin and Voight) carried themselves very well. They have a reputation of people wanting to work with them. That’s because they are nice people. They are humble guys, but they are also very good at what they do.

Messenger: With “Woodlawn” being a faith-based movie, did you see a reflection of their faith off-screen?

Castille: When you come on to a movie, whether you are a Christian actor or not, a movie like this has weight to it. I don’t think you can be around the message every day and the script and the story without it impacting you in some sort of way. This movie has a special message about love, and I would think this would help you understand love and how people are broken and have issues. I think this movie impacted everybody on a high level.

Messenger: You are speaking at Duncan, First today. What other speaking engagements have you had as a result of this movie?

Castille: This is like my 200th event in the past year. One thing that I’m learning is that people need people to feel loved and accepted. People need to feel validated, and the best way I can see how to help is share God’s love with them. Because that’s what He is. I think that’s the simplest formula to sharing the Gospel—love God, love people. It’s not this super spiritual-type experience. For me it’s just about being around people, learning people; learning how people operate and live around the country. It’s been a good experience for me to travel and use my voice and platform to encourage people because of “Woodlawn.”

Messenger: As you have talked to people around the country, how have they responded to the movie?

Castille: People have said it has helped change their life. That’s the greatest response you could ever ask for. I’ve heard people say they’ve reached people they haven’t been able to reach because of this movie. They said they’ve been trying for years and years, and then (those being reached) go to this movie, and all of a sudden the light bulb turns on. I’ve heard people say it’s the best movie they’ve ever seen. There’s been a lot of positive responses to the film. I’m just blessed to be a part of it.

Messenger: What’s next for you? Do you want to be involved in other faith-based movies?

Castille: I’m going to continue acting. I’ve spent three years chasing this opportunity, and I will pursue it with a full head of steam into this industry and hope to have an impact. I think there is a hunger for these kind of films, and given the opportunities, I’m going to take them. I always want to do positive, purposeful movies. And there are movies that are not faith-based films, but you can find faith-based messages. I am drawn to stories like that.

Messenger: If someone wanted to follow a similar path that you are on, what advice would you give them?

Castille: Work hard and pray harder. If you are a Christian you’ve got to ‘bring it.’ That’s one thing that, in the business, if you say one thing and live another, you won’t have credibility. It’s one thing if people don’t hire you because you’re a Christian, but you still try to be the best you can be at your craft. Along with my faith, being good at what I do helps me get into doors.