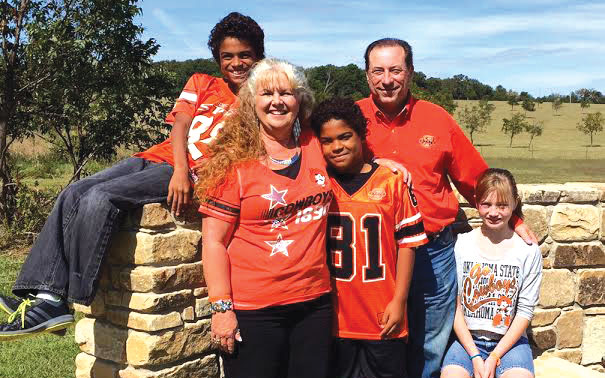 If you are an Oklahoma State University (OSU) Cowboy fan, you may have seen Michael Robinson on television escorting head coach Mike Gundy after the football games.

Robinson is the chief public safety officer at OSU.  He is responsible for the safety of the nearly 26,000 students. This is quite a responsibility, but Robinson is even more concerned with the security and protection of a much smaller, yet precious group of kids. He and his wife, Kathy, have had 13 foster children in their home and three of those now share their last name.

This journey began in August 2000 when the couple’s church, Edmond, Waterloo Road, had an ad in their bulletin about the need for foster homes. Kathy felt the Holy Spirit prick her heart, but argued with God about it for two weeks before approaching Michael. The next Sunday, the bulletin ran the ad again and the couple knew God was calling them to foster. Michael explains his calling this way, “The concept of adoption and taking care of orphans is addressed many times in Scripture. As Christians, we preach against abortion and speak of the evils of alcohol, but we don’t step in to take care of the victims. The kind of foster parents kids need are those in the church.”

While they didn’t enter into foster care with plans to adopt, their first placement was an infant who immediately stole their hearts. It looked as though they would have the opportunity to adopt this little one, but the door was abruptly closed and Michael and Kathy were left heartbroken and confused. Michael was left reeling with his emotions and was ready to be “done” with fostering. It was Kathy who changed his mind by saying, “These kids have to do without what they need so you won’t have to feel bad?”

And so the journey continued.

In 2004, after several other placements and reunifications, a beautiful baby boy with soft curls and dimples was placed in the Robinsons’ home. Within a year, his newborn brother also came to join them. These young boys became available for adoption, and in 2007, Michael and Kathy were blessed to add them to their now grown biological kids, Kaleb and Kylee. The boys’ first names were changed to Kooper and Keagan, and more importantly, their last names will forever be Robinson. But, God wasn’t through.

One Saturday while Michael was away at an OSU football game, Kathy volunteered to take a 2-year-old girl as an emergency placement for the weekend. However, the mother of the family she was to be placed with the following week broke her hip and already had five other foster children. Michael and Kathy agreed to keep the toddler for a while longer. This fair-skinned, freckled-faced, strawberry blonde was already calling them “Mommy” and “Daddy,” and once again, the couple knew they had lost their hearts. This temporary placement became a forever home for Karsyn in 2008.

“Fostering can be emotionally and physically challenging—understanding where they came from when it’s so different from your own background, relating to their insecurities, understanding the reason for their behaviors, pouring yourself into them and then giving them back. It isn’t easy. It isn’t even within my power. I can’t do it on my own. God has used fostering and adopting to completely change my faith and my prayer life. He has given me the peace I need to give these kids a safe place to live for however long they need it,” explains Kathy.

When asked what the biggest blessing has been, the burly officer has to stop to regain his composure.  Kathy sits across the table and cries with him as he simply says, “Them!  Knowing that they know they are safe and loved. Thinking about where they are versus where they might have been.”

The children would agree. When asked what the best part of being adopted is, Karsyn replied, “Actually, having someone who cares for me and gives me opportunities to do things that I wouldn’t have been able to do.”

Kooper grins and says, “Without Mom, I wouldn’t have known about bacon!” And finally, Keegen bows his head and quietly says, “I just feel safe.”

The Robinsons’ obedience to God’s calling continues to affect lives. Several families in their church and community have witnessed their journey, and have begun their own venture. Their daughter, Kylee, fosters, and will soon adopt. Please pray about your part in fostering and adoption.