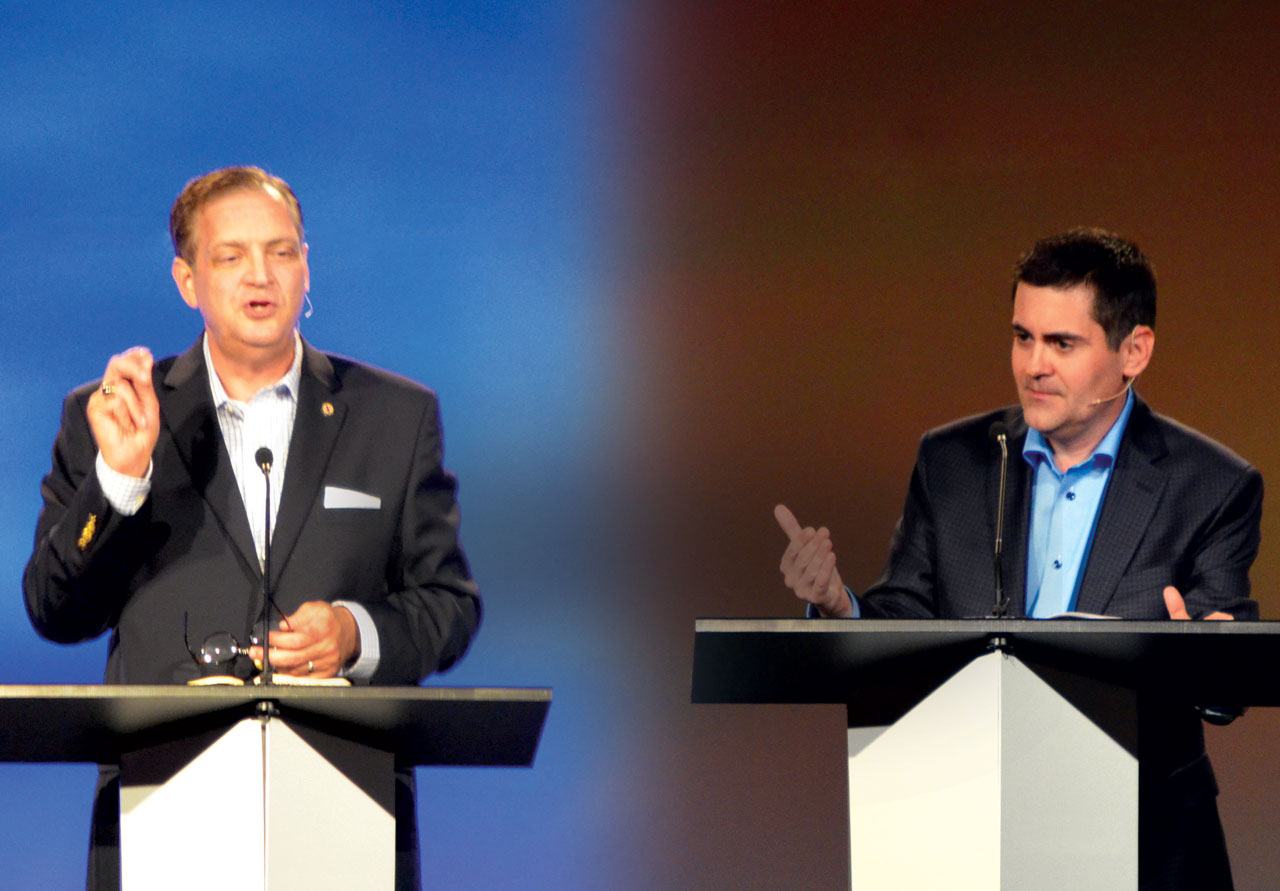 Key speakers for March 9-10 Conference on “The Gospel, Sexuality & The Church”

The Baptist Messenger recently sat down with Albert Mohler, president of Southern Seminary, and Russell D. Moore, president of the Ethics & Religious Liberty Commission, to talk about same-sex marriage and American culture. Both Southern Baptist Convention leaders will be coming to Oklahoma to be the key speakers for “The Gospel, Sexuality and the Church” conference on March 9-10 hosted by the Baptist General Convention of Oklahoma (BGCO) at Oklahoma City, Quail Springs.

Messenger:  We are increasingly confronted with this issue of sexuality, cultural issues, same-sex marriage, and I wanted to ask you some questions as it relates to that. Beginning with thinking about homosexuality and the church what are some ways the church can respond with grace and with truth?

Mohler: That’s a great question. I think one of the first things that we need to remember is that in the biblical world view, grace and truth are always combined. You really can’t have one without the other.

So, if it’s really truth in its own uniquely truthful way, then it will be gracious, and if it’s genuinely gracious, that is filled with grace, it will also be truth, even as we are told in the prologue to John’s Gospel, we have beheld His glory, the glory of the only begotten of the Father, full of grace and truth. So grace and truth are united in Christ, and they must be united in Christians as well.

And that does not just mean some kind of subjective sentimentality. It means our ambition in speaking the truth is not to use the truth as a weapon, but rather to extend grace that is defined by the Gospel of Jesus Christ. And every truth we know is a truth that bends its knee to the reality that it comes from Christ. And so, in the very gracious name of Jesus, we speak the truth that Jesus has given to His disciples.

Thinking about this issue of homosexuality, it really comes down to people. You’ve pointed out in some sermons that there has been a rapid rise internationally of acceptance of same-sex marriage with now some 37 states having some kind of access to it. In across the union and thinking about the impending Supreme Court decision relating to this, what do you see across the horizon and how should churches be prepared and responsive in loving ways?

Mohler: What we are looking at is a moral revolution that is coming at a faster velocity than anything that has any parallel in human experience or human history that we can trace because we are looking at something that was universally condemned as recently as say 20 years ago.

And where the vast majority of people 20 years ago, even in Western Society, thought that something like same-sex marriage was unthinkable, and we’ve gone in less than half a generation to where more than 70 percent of Americans now live where same-sex marriage is legal, usually by court action we should note, and where at least some majority of Americans now say, as this moral revolution has progressed, that it ought to be legal.

So we are looking at a moral revolution in which, as one observer has pointed out, we have the complete reversal. It’s not just a shift; it’s not just a change in direction. It’s a 180-degree turn on the part of the society. And those of us who hold to a biblical standard of sexual morality, we now find ourselves, nationwide and in terms of Western Society, considered those who are out of step with the society, not to mention the future.

So churches have to understand that we really do hold to a biblical standard of sexual morality, and we really do for two reasons. First of all, because that standard of sexual morality is revealed in the Scripture, which means it’s not only God’s law, but it’s also God’s perfect plan for us, and secondly, because we love people, and we genuinely believe that the normalization of what the Bible calls sin and the legalization of same-sex marriage will not lead to greater human happiness, but rather to unhappiness. So it’s love of God and love of neighbor that compel us to hold true to everything the Scripture commands.

Messenger: We are sitting here for this interview at an SBC event in Alabama, a state that recently was forced by a Federal Court to begin issuing same-sex marriage licenses. As states and churches deal with this issue, as well as the impending case before the Supreme Court, can you talk about this issue and what you see on the horizon?

Moore: I have been saying for a long time that I think there are a lot of Christians who thought they would be shielded from these questions of marriage and sexuality because they were in “red states” or in culturally conservative areas. Yet right now, there are same-sex marriages taking place in Oklahoma and now in Alabama. So that (factor) is not going to keep people from this reality.

It seems to me what’s happening is a cultural change in this direction, and there is also a legal move in this direction. I really think that what happened in 2013 by the U.S. Supreme Court in the Windsor ruling was indicative of where the Court wants to go, which is to somehow find a right to same-sex marriage in the 14th amendment (of the United States Constitution) and apply that to all 50 states.

So I think we need to be ready for that, and that’s where it’s going to go. But even if it does not happen in June (with a Supreme Court ruling), that is certainly where the momentum is going all around the country, with 37 states and the District of Columbia now having same-sex marriages. So we have to be ready to address this.

Yet this is not something to panic about and or be angry about. We must recognize this is our mission field and articulate what we believe about marriage, why we believe those things. That’s the normal situation of the Christian church. We have a distinctive view of marriage, because we believe marriage signals the Gospel of Jesus Christ. Then we have to embody that so that we have congregations that protect marriages and hold people accountable to the vows they make.

Well said, and I think you have projected that confidence, for us not to press the panic button. Thinking about our own Christian testimony, will what we do be as important as anything we say?

We have to do that. And so that means we have to believe what we have been handed down about marriage and hold ourselves accountable. We can’t hold the world accountable to a vision of marriage we don’t believe. So if we believe that marriage is not just a contract between two people, but it is a sign of the Gospel itself, then that means that the rampant divorce culture that’s been going on in so many of our churches is more than just a social problem. And it’s more than just a problem of people who can’t get along and what to do with their kids. It’s an alternative gospel that we have to address. And that is why we have had many churches ignoring about what the Bible teaches about believers marrying one another and not unbelievers, and also about the biblical grounds for divorce. Above all of these questions, we have to go back to first principles, and as we are articulating to the outside world what is distinct about our view of marriage, we have to re-teach ourselves those things, too.

To hear the full interviews, look for the “Messenger Insight” podcast in the iTunes store and on www.baptistmessenger.com/podcasts. For more information or to register for the March 9-10 BGCO conference featuring Mohler and Moore, visit www.bgco.org/bgco-conference.