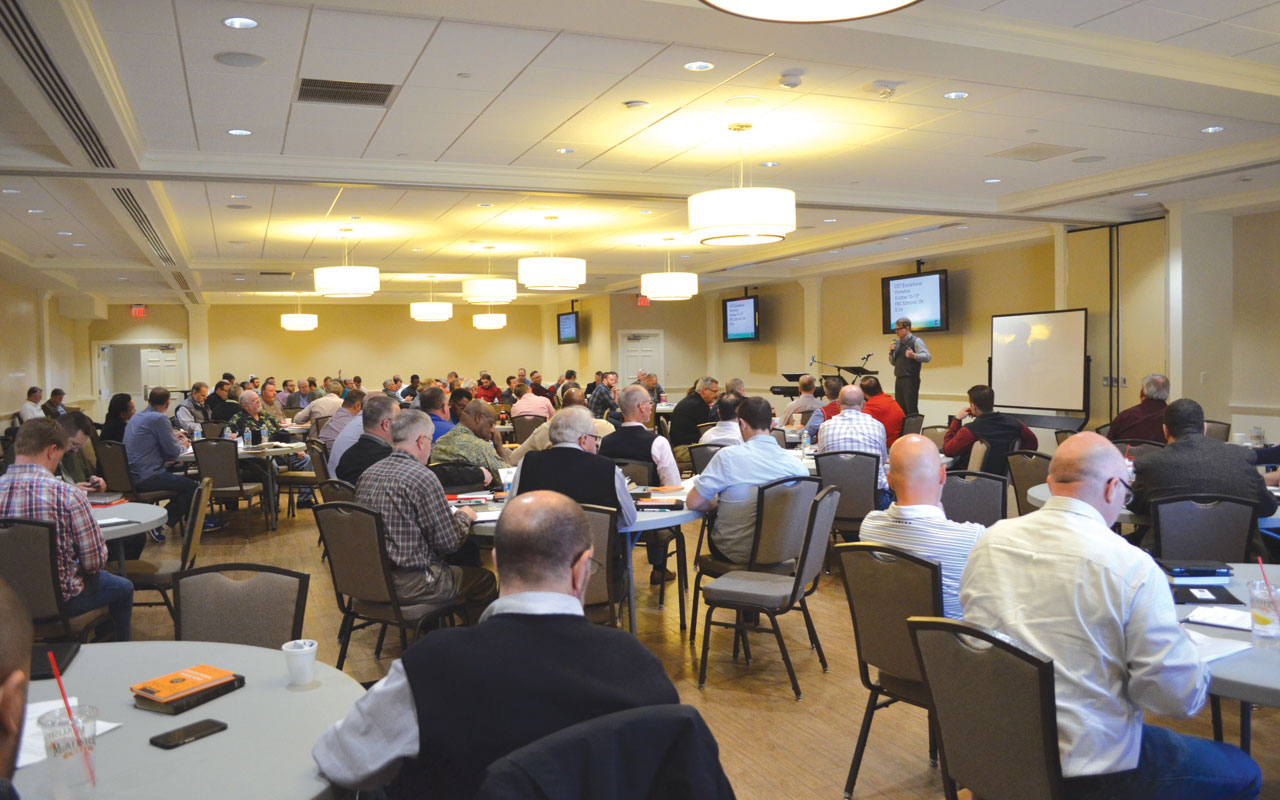 More than 130 pastors and others dedicated to preaching the Word of God received heartfelt instruction from a trio of experienced teachers and practitioners Feb. 29-March 1 during the Priority of Preaching Conference at Oklahoma City, Southern Hills.

The conference was sponsored by the Pastoral Leadership Office of the Baptist General Convention of Oklahoma (BGCO), and featured Bryan Chapell, author of the book Christ-Centered Preaching and pastor of Grace Presbyterian Church in Peoria, Ill., Jim Shaddix, author of The Passion-Driven Sermon and professor at Southeastern Seminary in Wake Forest, N.C., and Juan Sanchez, pastor of Austin, Texas, High Pointe, and an instructor with the Charles Simeon Trust.

“We had a great conference. Our speakers were incredible and it was one of the best we have had so far,” said Brett Selby, BGCO pastoral leadership specialist. “I know the question sometimes comes up about a conference on preaching: aren’t preachers supposed to know how to do that? Isn’t that what they went to seminary for and learn how to do?

“But, we recognize the difficulty of the task; that God’s Word is limitless, and so there’s always that sense in which we strive to get better at giving those ancient texts their voice, which is really what preaching is, letting texts talk; letting God’s Word have its voice, and the temptation in preaching is that our voice drowns out the voice of the text.”

“Some years ago, we had something here at the Convention called Mission Advance, and one of the main emphases at the heart of that committee was we wanted to raise the level of preaching in Oklahoma,” Jordan explained. “We wanted the men who stand in our pulpits to train and continue to increase in their skill level, their holiness and the way they walk with Christ to become more effective in the way they present the Word of God.

“We set out on that journey and we have partnered with OBU and this event is one of the kind of things we want to do to simply be a part of investing in your lives and hopefully then as you go back and invest in the life of your church.”

Along that line, Jordan also gave everyone in attendance a copy of a new book on leadership—Don’t Quit Before You Finish—written by Jimmy Draper, former Oklahoma pastor, president of the Southern Baptist Convention and president of LifeWay Christian Resources.

Kicking off the conference Monday morning, Shaddix said preaching is a stewardship all pastors are charged with, and he quoted John Broaddus, who said preaching is letting God speak out of His Word . . . the Bible is the written record of God’s voice.

“Preaching is the act of giving God His voice in the hearing of His people. Because God has spoken and the Bible is the accurate record of His speech, we’re compelled to communicate it accurately so we represent God rightly; it’s as simple as that,” Shaddix said.

Instead of focusing on technique, Shaddix honed in on the theology and power for expository preaching in his three presentations over the two-day conference.

As to theology, Shaddix addressed six aspects: the inspiration, revelation, nature, purpose, power and literature of the Bible.

“This text accurately records God’s voice,” he reiterated. “But, it is about God, not us; however, it’s not just a book about God, it’s a book from God. Preachers are mailmen delivering a message from God to others.

In relation to the power of expositional preaching, Shaddix urged the pastors to align themselves with God’s sovereign work.

“Make sure your goal is the glory of God alone,” he warned.  “Live to be filled with the Holy Spirit, recognize—and even revel in—your own human inabilities and align your life, methods and message with the supernatural text of Holy Scripture,” he stressed, adding a sober caveat: “It’s possible to be a successful pastor and grow a church in the flesh, but the omnipresence of the Spirit isn’t synonymous with His effects and influence.”

And, finally as to the process of explanation in expository preaching, Shaddix reminded everyone that “the mind is the pivotal starting point for change,” and that as they gather material in sermon preparation through word studies and commentaries, everything should be filtered through the filter of the sermon’s main idea. In other words, keep it simple, determining the best way to explain each element in an enthusiastic, manner.

Chapell’s initial focus was “How grace motivates and enables powerful application of biblical truth for obedience and hope,” defining application as the duty God requires of man—what man is to believe concerning God.

Simply, Chapell said, application points out what difference something will make in someone’s life.

“Preaching, itself, is a redemptive event,” he said. “But, people evaluate our message by who we are, and they evaluate that by our perceived competence and how much they believe we care about them.”

“All are needed, but we still have questions regarding proportion, order and components,” he said.

Sanchez cautioned those present to “stay on the line” when preaching.

“We are often tempted to say more than the Scriptures, zealously venturing into religious pietism, which becomes a kind of legalism,” he warned. “We can also be tempted to dip below the line into liberalism and pragmatism, ignoring both the content and point of Scripture. As teachers of God’s Word, we must commit ourselves to saying nothing more or less than the Scriptures say.”

Sanchez also cautioned the pastors not to let their own frameworks (individual backgrounds/beliefs) shape their interpretations of the Bible  and bend it until it says what they want it to say. He also belied isolating the text, urging understanding it in context to see how the original audience understood it.

“By understanding the text in its context, or how it would have been understood by the original audience (to them/then), we can be better prepared to understand the right application of the text (to us/now),” he said.

Finally, preachers are to travel through the cross, Sanchez said.

“If we are to teach the Bible as Christians, we must show a legitimate connection from our text to the Gospel of Jesus Christ,” he said, pointing out that after the resurrection in Luke 24, Jesus showed the disciples how the Old Testament Scriptures point to Him. “He also declares that they will be (apostolic) witnesses of this Gospel to the end of the Earth. The content of those Scriptures and that witness specifically point to two things: his suffering/death and resurrection (which anticipates the intended response of repentance and the result of forgiveness).”