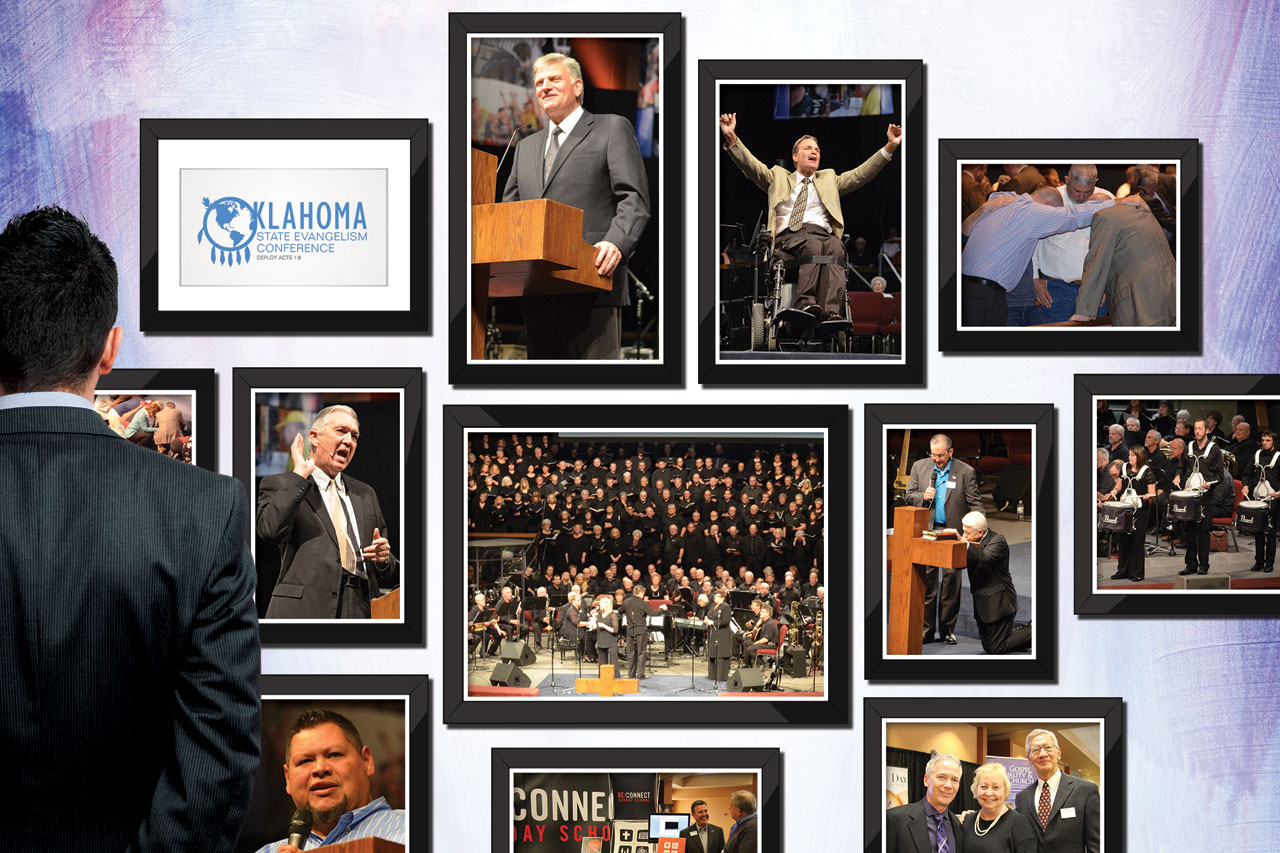 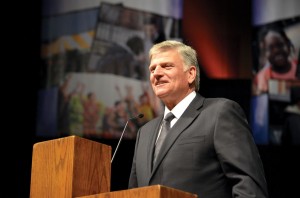 Using Matthew, Chapter 8 as his text, Graham focused on the story of the storms of life and the steadying hand of the Savior as he encouraged those in the audience.

“In life, we find ourselves in storms,” he said. “But, Jesus says, if you’re in the boat with me, you’re not going to sink.”

But, he then shouted a warning to those who don’t know Christ.

“If the Lord, Jesus Christ, is not in your life, let me tell you something, you’re not going to make it,” he stressed.

Addressing the current situation in America, Graham said, “My father, when he was in school, they had a Bible in the  school; they had the Ten Commandments on the wall; you, could pray in school, and the teachers would lead in those prayers . . . . We’ve got to take a stand, we cannot back up, we cannot run, we cannot retreat.

Graham, the son of world-famous evangelist Billy Graham, who shared his testimony—he was saved at age 22—said the only hope for America is Christianity. But, he warned there is a heavy cost associated with it.

“People don’t realize the price that was paid for our salvation and the cost of being a Christian,” he emphasized. “If you’re going to live for Christ, there is going to be a price to pay. The world will ridicule you; your neighbors may not speak to you. But Jesus said ‘I am the way, the truth and the Life! No man comes to the Father but by Me.’ Buddha can’t do it. Mohammad can’t do it. No one else.”

As the service closed, one young man counted the cost  worth it, and walked to the front of the auditorium and before the huge throng of witnesses, repeated the prayer of salvation giving his heart to Jesus amid a chorus of Amens and Hallelujas.

Speaking first in the opening session Monday afternoon, Steve Gaines, pastor of Cordova, Tenn., Bellevue, addressed “A Man and His Prayer Life,” focusing on Mark 11:12-24, where Jesus emphasizes prayer to his disciples.

He pointed to the powerlessness of man without prayer.

“We don’t have a chance without prayer . . . . the joy is gone if you don’t have a prayer life,” he said, adding that, “we must pray to God in faith,” suggesting that the most effective prayers often are done by “praying to God based on the Word of God by praying the Scriptures back to God.”

Gaines said we must pray for God to move mountains, as Jesus said in verse 23.

“When we pray, God will answer,” he avowed. 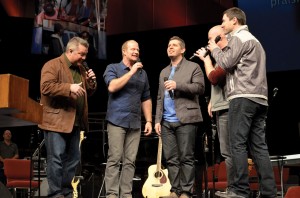 “This Hope” led in worship throughout the sessions of the State Evangelism Conference at Del City, First Southern, Jan. 26-27 (Photo: Bob Nigh)

Steven Smith, vice president of student services and communications at Southwestern Seminary, opened his sermon sharing his appreciation to be able to speak from the same pulpit his father Bailey Smith, evangelist and former pastor of Del City, First Southern, once spoke.

Using the text from Matt. 13 on the Sower and the Seed, Smith said the Gospel, as the seed, will be rejected by many as those represented as soil because of hardness, shallowness and distractedness. He said he remains positive today in spite of the decline in Christianity, specifically in church attendance, referencing a recent Lifeway survey that found 10 percent of recent high school graduates still attend church.

Ken Weathersby, vice president of convention advancement for the Southern Baptist Convention, spoke on the “Marks of Maturity,” addressing pastors and those involved in church ministry. Speaking from Phil. 3, the “marks” he emphasized were 1. Learn how to rejoice in spite of problems; 2. Expect criticism; 3. Don’t put confidence in your flesh; 4. Think through your choices; 5. Keep your focus on the right things. Do not allow the past to hold you hostage; 6. Be willing to let people mature and grow.

Emphasizing his point on letting people mature and grow, Weathersby said, “If someone else thinks differently than you, it is not your responsibility to straighten them out. That’s what the Bible is supposed to do. When your church is growing, you’re going to have a lot of people who are part of the family who are not ‘church-broke.’ If they come in with the rings in their nose, coming in not looking like we think they should look, give them room to grow. Don’t run them off. Love on them unconditionally because (that’s how) God loves us, and He saved us.” 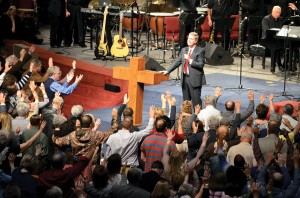 Jim Cymbala led a time of fervent prayer in the Tuesday evening session. Many came to the altar to pray for loved ones (Photo: Chris Doyle)

Jim Cymbala determined it was providential for him to speak during the final night of the SEC, as the pastor of Brooklyn Tabernacle flew out of New York City while experiencing Winter Storm Juno.

“I know I’m supposed to be here tonight. I was probably on the last flight out of LaGuardia yesterday,” said Cymbala, describing “State of Emergency” conditions in New York City as the major snow storm struck most of the Northeast region on Jan. 26.  “Snow was swirling as we took off, and it was great to hit Oklahoma in 62 degrees.” The crowd of 2,250 responded with laughter and applause.

He spoke on the story in Luke 22 about Jesus telling his disciples to “pray that you will not fall into temptation.” Cymbala said there are times that “we should be flat out praying” and pointed out there is a lack of emphasis on prayer as an answer for churches struggling today.

“God tells us what ministry ought to look like. Don’t go by your peers. Don’t go buy books that people are writing unless they are expounding the Word of God. God told us how a church can be built. He tells us what the church should look like. But it’s found in the New Testament. We don’t need to reinvent the church. We need to rediscover the Christian church.”

Cymbala said he wanted to shorten his time of preaching because he wanted to spend time praying with those who were in attendance.

“If sermons and talking and exposition would change America and our society, we would’ve done it by now,” said Cymbala. “What we’re lacking is not prayer in schools; we’re lacking prayer in the church. That’s where the real trouble is.”

The final half hour of the service was spent in prayer, as Cymbala officiated from the pulpit. Many came to the front, either standing or kneeling, and an emphasis was made to pray for children and loved ones who have gone astray from their Christian faith. Cymbala shared how his own daughter ran away from the Lord, but it was faithful, persevering prayer that brought her back.

Spontaneous singing ensued led by Cymbala, who started with “I Need Thee Every Hour,” then sang “How Great is Our God” and “When We All Get to Heaven.” Accompanists for the Singing Churchmen and ChurchWomen, who provided the music for the evening service, had no difficulty keeping up with Cymbala as he went from song to song.

Just as a young man made a profession of faith in the Monday evening session, a lady named Cherokee who sat in the hearing-impaired section also accepted Christ as Lord and Savior Tuesday evening, Mike Napier, personal evangelism specialist for the Baptist General Convention of Oklahoma (BGCO), reported.

John Avant was the first speaker of the Tuesday afternoon session. The pastor of Concord, Tenn., First addressed the concerns of the local church not reaching millennials.

“We are not dying because of our theology. We are in danger of dying because of our missiology and our ecclesiology,” said Avant. “We must become a people of local church and local community missiology. We have a mission field called the millennial generation… if we lose them, then we will commit suicide of our denomination. We will age.  We will die. We must approach our local communities and a generation of young people. There is our mission field.”

Bobby Welch, associate executive director of the Tennessee Baptist Convention, told those in attendance during the Tuesday afternoon session, “We are at war!”

Welch bemoaned the fact that Christians are losing the battle in reaching the lost, and he said he believes it is because of one thing—we have lost focus.

“But, I’m here for hope,” Welch declared. “There is hope for the lost and for the church.”

Because of Jesus, “the victory is ours,” and “we have in this room leaders and prospective leaders in (the) spiritual warfare going on in our country.”

Thomas Hammond, pastor of Alpharetta, Ga., First, preached on the story of the paralytic and his four friends who carried him to see Jesus in Capernaum in the Gospel of Mark, Chapter 2. Hammond said the important principles in the story are that Jesus was present, the Word was being proclaimed, there were men of faith involved, and when you live by faith, it impacts the power of God.

“The faith of the paralytic’s four friends’ was visible,” Hammond said. “They were creative, they were cooperating, and they were willing to adapt to the situation when there was no way to get inside the house where Jesus was. And, what was the result? A spiritual need was met.”

Hammond then asked those present, “Is there something new in your community in which you can participate? Can you get involved? Jesus doesn’t bless you just for you. He blesses you so you will be a conduit of His blessings to others.”

Napier, who served as the SEC host, was encouraged with the results. “I believe the Lord showed up,” he said. “That’s what we had prayed. Yet without (God), all of our planning and preparation for the event would not matter. We had so much help from the volunteers at First Southern, the BGCO staff and people around the state. Prayerfully, this event will serve as a springboard for sharing the Gospel in powerful ways in the year ahead and beyond.”

“I was overjoyed with the response to the Evangelism Conference,” said BGCO Executive Director-Treasurer Anthony L. Jordan. “Most significant was the spiritual impact of the conference. God spoke to us in dramatic and deep ways. Prayer and personal evangelism were the overarching themes.   It’s time we do it!”