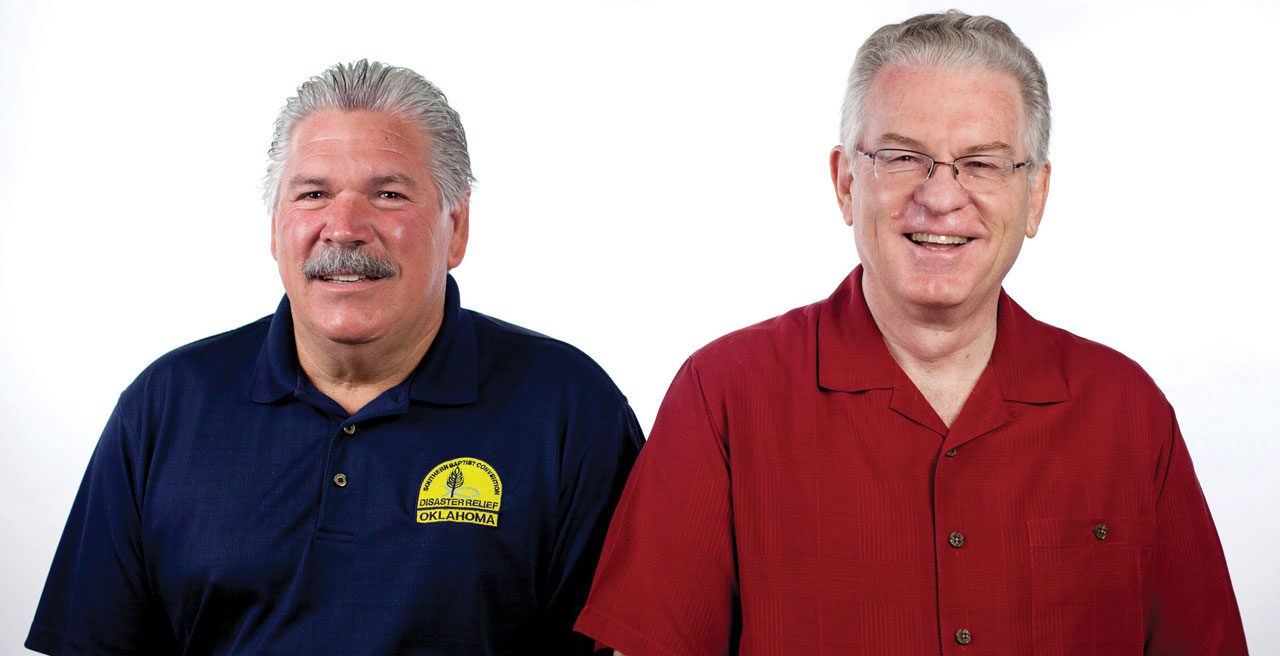 We have been friends for more than 30 years. He and I first worked together when I was president of the Baptist General Convention of Oklahoma (BGCO) Pastors’ Conference, and he was vice president.

He has been pastor to my parents and my sister’s family. When my dad died, he preached his funeral. When I became executive director-treasurer and we needed someone to lead men’s ministry and partnership missions, I went directly to him to lead those ministries.

Since that time, we have traveled the world together on mission. In the midst of disasters, we have walked together through debris, praying and loving on families who have lost everything. I trusted him without reserve. He never disappointed me.

Last week, Sam Porter shared with me that he is going to retire August 15 from the BGCO. After retirement, Sam is going to serve the North American Mission Board (NAMB) as the national leader for disaster relief. It is both a sad day and a day of rejoicing. Let me explain.

Sam Porter has done an epic job as leader of the BGCO Disaster Relief Ministry. Today, Oklahoma has one of the largest, strongest, best organized and most effective Disaster Relief teams in the Southern Baptist Convention (SBC). At one point, Oklahoma had more trained Disaster Relief chaplains than the rest of the SBC combined.

Sam has been instrumental in training more than 9,000 Disaster Relief volunteers. When disaster strikes, these men and women move into action with speed and expertise. These volunteers know what to do, and they do it with excellence. Oklahoma Baptist Disaster Relief has won the admiration of people across the nation and world.

In a few weeks, the BGCO will open a state-of-the-art Disaster Relief center that will house the expansive amount of equipment used in the midst of disaster work across our state and nation. This center will also have a training room and many other amenities to be used by volunteers. Sam led the way in raising the funds and preparing the facility for use.

When it comes to Disaster Relief, no one excels Sam Porter in understanding, expertise and respect among fellow Southern Baptist leaders and governmental leaders as well. He is the dean of Disaster Relief leaders.

Thus, it is a great loss to Oklahoma as Sam moves to retirement and then to a key leadership role for Southern Baptists. Someone asked me who we would get to replace Sam. My answer was simple—we won’t replace Sam. He is one of a kind. But I am convinced God will give us a new leader who will build on the broad shoulders of this former Marietta and Baylor football player.

For the very reasons we will feel such a loss (and loss is felt perhaps more deeply by me on a personal basis), we can rejoice for Southern Baptists. Over the last several years, there has been a widening gap between NAMB and state conventions. Even in the Disaster Relief area, the journey behind the scenes has sometimes been strained.

Sam has the respect of NAMB leaders and state convention leaders. Sam, more than any other person, is positioned to bring everyone all together. He can be a catalyst for stronger relationships and renewed partnerships between state conventions, associations, and NAMB.

So through tears of sadness, I find a sense of joy for this new role Sam will play on the SBC stage. He is a dear friend and close colleague.

He has blessed me and Oklahoma Baptists with his tireless commitment to meet the needs of people in crisis caused by a disaster. He has always kept, at the heart of the ministry, a passion to see people come to know the Savior. He trained and challenged our teams to stay alert for every opportunity to share Christ and bless people with the love of Jesus, and BGCO Disaster Relief teams have followed their leader.

Thank you, Sam, for nearly 20 years of excellent service to Oklahoma Baptists. I pray that you and Sheryl will enjoy your retirement and new ministry at NAMB. Like so many of the Disaster Relief volunteers, I pray your later years will be more blessed and impacting than the former.

If that is so, Southern Baptists will see a remarkable revival of partnership and effectiveness in Disaster Relief ministries. Blessings my friend. We are thankful you will remain an Oklahoma Baptist. You certainly will always have our support and prayers.