In 1917, the first summer of Falls Creek, Rosalee Mills Appleby attended as a camper. That summer, she gave her life to Christ and accepted a call to a lifetime of ministry. 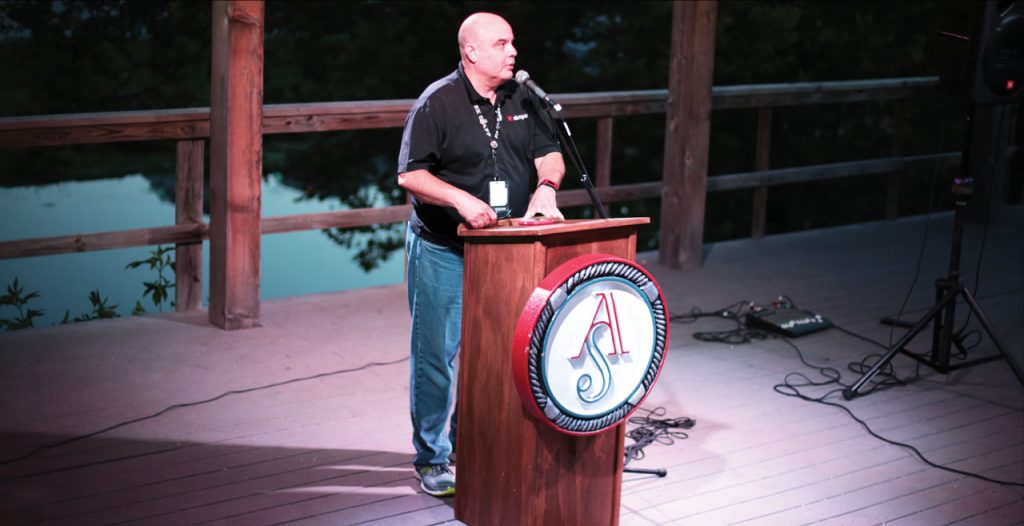 Andy Harrison describes the history behind the Appleby Society to campers.

School in Louisville, Ky., where she met her husband, David Appleby. The Applebys began their time in the mission field as pointer missionaries in Brazil. Shortly thereafter, they were expecting their first child. David then became sick and died after complications during a surgery.

Rosalee found herself at a crossroads. She could go home, or continue completing the mission she and her husband had set out to complete.

She gave birth to their son David and decided to stay in Brazil, where she served for 35 additional years as director of the Department of History and Statistics of the Brazilian Sunday School Board. She retired and returned to the United States in 1960 and passed away in 1991.

Now, OBU awards an outstanding senior girl with the Rosalee Mills Appleby award. This award was established in 1936 as OBU’s first award and has been given annually since that time. A committee chooses the woman of the graduating class who most nearly exemplifies the qualities which characterize the ideal OBU woman, including personal character, scholarship, leadership, concern for others and Christian commitment.

“Because she was the first person called to ministry and so faithfully carried out the ministry God called her to, we wanted to, in her honor, create something called the Appleby Society,” explained Andy Harrison, Falls Creek program director. “We wanted this to be an encouragement to other people who are considering a call to ministry, and this would be a registry of those who have been called to ministry at Falls Creek.” Thus, the Appleby Society was born.

There are two requirements to be a part of Appleby Society. First, one has to be called to ministry while attending a Falls Creek event. Second, one has to have served at least one year in some ministry position. That ministry position can be a volunteer, youth ministry intern, paid, part-time or a full-time position.

Anthony L. Jordan, executive director-treasurer of the Baptist General Convention of Oklahoma (BGCO), was the first person to register for the Appleby Society. Jordan shares his experience saying, “At age 14, sitting in a worship service under the old tabernacle, I heard the call of God to special service. At 19, one month after marrying Polla, the Lord renewed that call to preach.” Jordan has now served 49 years in the ministry.

“It was his brainchild,” Harrison said about Jordan, “and we created it so we could hear and read the testimonies of all of these 36,000 people who have surrendered to ministry at Falls Creek since Rosalee Mills first did.”

After people sign up for Appleby Society, they have the opportunity to share their testimony online at www.skopos.org/fallscreek/appleby. People are able to see on the website where members serve and what God has done in their lives.

Falls Creek campers are encouraged to visit the Appleby Society challenge after each Friday evening service to share about their call to ministry.

“By doing this, we want to find out how far reaching Falls Creek’s ministry has been,” Harrison said.

Rosalee shared her experience at Falls Creek in one of the many books she wrote called “White Wings of Splendor” in the third devotional. The following is an excerpt from her devotional; the remainder can be found on the Skopos website.

“The crisis in my youth came when I attended the first Falls Creek Assembly in the Arbuckle Mountains. Beneath the rude tabernacle in those woods, the climax came when J. W. Jent was preaching. ‘God is all-wise and cannot make a mistake. He is all loving and would not make a mistake. Whatever He has for your life, there you will be the happiest and do the most good.’ His words were so reasonable, so assuring. My resistance was broken, and I made a definite surrender to God.”

Campers who attend Falls Creek now have the opportunity to participate in the Appleby Challenge on Friday nights, following the evening service.

Typically, there has never been after-service programming on Friday evenings at Falls Creek. During every Falls Creek youth week this summer, members of the Appleby Society share how God called them to ministry and briefly challenge campers to take their Falls Creek experience and live out their faith at home.

“In the future, we want that to be students talking to other students,” Harrison said. “So if someone who was called to the ministry as a freshman (at Falls Creek), and then ends up serving in some leadership capacity in their youth group for a year comes back to Falls Creek as a sophomore or junior and joins Appleby Society under the recommendation of their youth pastor, and shares their story with other students.”

Falls Creek has been the place many have accepted the call to ministry. Harrison says the reason behind that is, “Here at Falls Creek we spend time talking and teaching and preaching about salvation and asking students, ‘Is God calling you specifically to go on a mission field?’ We promote our mission trips, and we have missionaries on the ground here to talk about missions. Because of the emphasis on the direct call, people are more contemplative and responsive.”

As the Appleby Society continues to be a place where those who have surrendered to the ministry at Falls Creek can join together and share their stories, it is the hope of all of those who established the society that it also encourages those feeling the Lord calling them to surrender to His call.

“It’s pretty powerful encouragement to go online and read those testimonies of all who are serving Him today,” said Harrison.

Those interested in joining the Appleby Society should visit www.skopos.org/fallscreek/appleby.