Perspective: Help is on the way 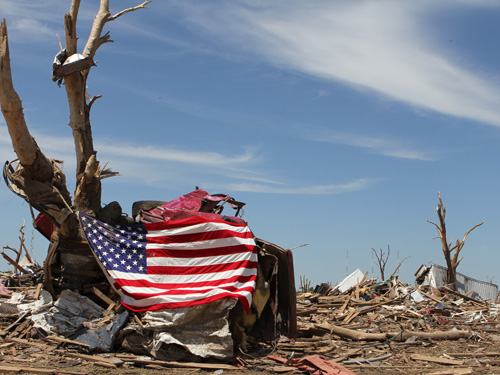 Few states in America know more about disaster than Oklahoma. It is not a contest we wish to win, but a reality we have come to accept. Few know more about how to face and brave the dark days than Oklahomans when thousands of people are left with no homes or cars and only the clothes on their backs.

Perhaps this is the reason that Oklahoma Baptists have built one of the strongest disaster relief organizations in the Southern Baptist Convention. With more than 5,000 trained volunteers and more than 250 endorsed chaplains, Baptist General Convention of Oklahoma (BGCO) teams have spanned the globe in response to tragedies created by natural disasters. Because Oklahomans have been helped so much through the generosity of people around the world, we have a heart to be generous when others are facing hardships.

While the 40th anniversary of BGCO Disaster Relief was being celebrated at our annual meeting last week, on the other side of the world a horrific typhoon—the worst in recorded history—was pounding the Philippine Islands. The magnitude of loss in life and property will not be known for many weeks and perhaps months. Needless to say, it was huge.

Southern Baptists have had a long and fruitful mission effort in the Philippines for decades. So almost before the wind stopped blowing, International Mission Board (IMB) missionaries were in action helping and serving, working alongside the Philippine Convention. International disaster relief is carried out through Baptist Global Response (BGR) in conjunction with IMB missionaries. Sam Porter, BGCO Disaster Relief director, has been on conference calls regarding the relief effort in the Philippines, and will remain tied to the effort there.

State conventions work with BGR,  and have an established protocol. Oklahoma is first in line for disasters around the world in the months of August and October. In this case, the Southern Baptists of Texas Convention is first in line in November, and are on the ground assisting and beginning a second phase of relief efforts following the immediate response of IMB missionaries in the Philippines. Oklahoma Disaster Relief teams have been deployed for 17 straight months. However, BGR will call upon Oklahoma soon, and we will respond. Be assured the work is being done by those in the front of the rotation.

Last week, in consultation with President Nick Garland and Porter, I instructed $50,000 from our general disaster relief funds—money given by Oklahoma Baptists—to be used in the Baptist relief effort in the Philippines. Oklahoma Baptists may want to give more money, and we have set up a fund specifically for disaster relief in the Philippines. You may give through your church, and the money will be sent to the BGCO, or you may give directly to the BGCO. Checks should be made payable to BGCO with a notation for Philippine Disaster Relief. You can also give online at www.okdisasterhelp.org. All the money given through this fund will go to the Baptist efforts in the Philippines. Administrative costs are covered by the Cooperative Program.

In every disaster, there is a great opportunity for the Gospel to be shared. When our teams go and serve without requesting payment for services, folks don’t understand. Many ask what motivates us and, thus, the doors open for faithful witness. Because of our love for Christ and people, many come to faith in Christ. I am thankful for Oklahoma Baptists who volunteer and who give with unmeasured generosity.