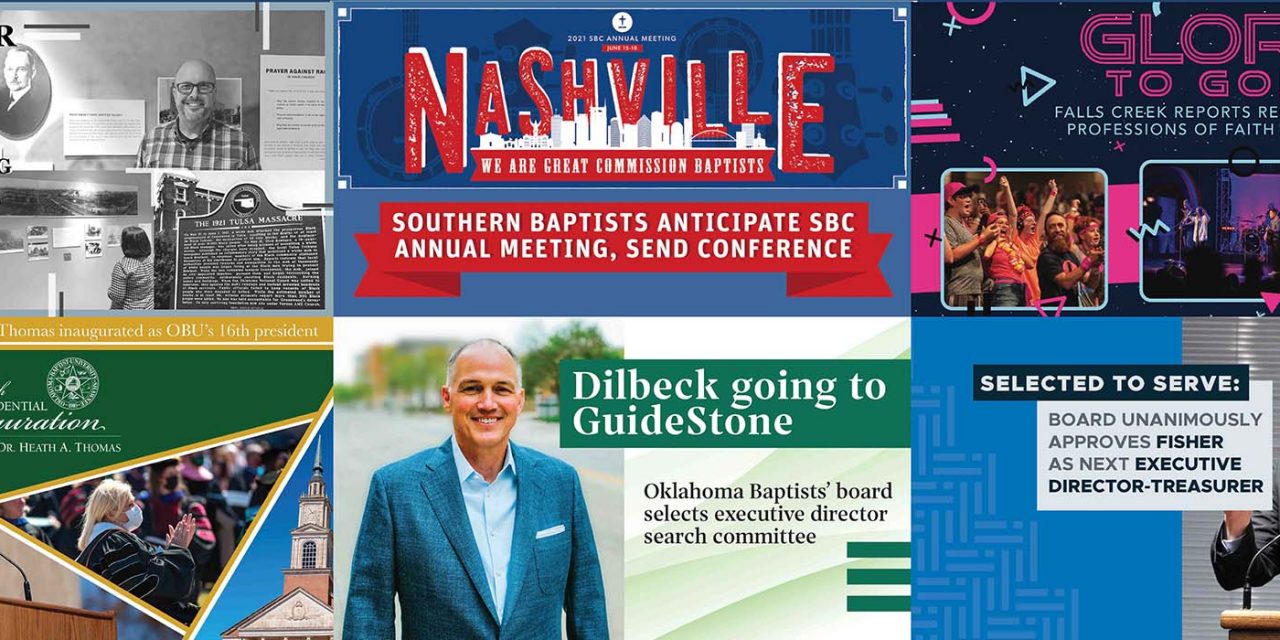 The year 2021 was met with challenges and opportunities, many of which appeared in headlines and news stories. The following are noteworthy and newsworthy stories, selected by the Baptist Messenger’s editorial team.

In May, it was announced that Hance Dilbeck was selected as the next president of GuideStone Financial Resources of the Southern Baptist Convention. Dilbeck, who had served as Oklahoma Baptists executive director-treasurer since 2018, officially stepped down from his role effective June 25, and a search committee had been formed to find his successor. Dilbeck, a native of Pawhuska, had pastored in Oklahoma for more than 25 years and served in a wide number of ministry leadership roles. He was the ninth man to serve as executive director-treasurer.

Oklahoma Baptist Disaster Relief (DR) answered the call after Hurricane Ida struck the southeast including Louisiana. Beginning in early September, DR team members worked diligently in affected areas, specifically in Houma, La. More than 85,530 meals were prepared and more than 154 requests for assistance were completed. The team members engaged in Gospel conversations with 764 people, resulting in 22 people making professions of faith in Christ. DR also helped rebuild Houma, Emmanuel, a church that had its building erected in 1988 by Oklahoma Baptist Builders. After the Dec. 10 tornadoes, DR served in Trumann, Ark., where more than 200 homes were damaged or destroyed.

Falls Creek witnessed 2,645 campers make professions of faith in Christ, the most recorded during a summer at the campground in the Arbuckle Mountains. More than 5,600 total spiritual decisions were reported, including 617 campers who surrendered to the call to ministry. The outpouring from the Lord came amid reduced attendance and numerous challenges.

From ministry events to summer camp to church services, the COVID-19 pandemic continued to interrupt, challenge and wreak havoc. Amid the COVID challenges, leaders found creative ways to minister and reach people for Christ. Even as many fell ill and tragically lives were lost across the country, the Gospel was shared with countless people in Oklahoma and beyond. Oklahoma Baptists developed the ReGather emphasis to help churches overcome the setbacks that resulted from the pandemic (oklahomabaptists.org/regather).

Messengers to the Southern Baptist Convention, meeting in Nashville, Tenn., in June, approved a motion to establish an independent Sexual Abuse Task Force. Guidepost was unanimously voted to be retained as the third-party firm to investigate and review practices of the SBC Executive Committee, and a full report will be given leading into the 2022 SBC Annual Meeting.

Citing fiduciary responsibilities as president and CEO of the Southern Baptist Convention Executive Committee, Ronnie Floyd announced his resignation Oct. 14 in a letter to Southern Baptists released by email. Floyd’s resignation followed SBC executive committee trustee meetings involving the formation of a Sexual Abuse Task Force and consultation of a third-party investigative firm, Guidestone, which recommended to the trustees to waive attorney client privilege related to the independent investigation of the possible mishandling of sexual abuse cases.

Heath A. Thomas took office as president of Oklahoma Baptist University (OBU) Jan. 1, 2020, but inaugural activities were delayed until March 26, 2021 due to the COVID-19 pandemic. An outdoor ceremony on the south lawn of Raley Chapel drew hundreds of students, faculty, staff members, administrators, alumni, delegates and guests.

Oklahoma Baptists were among many who observed the centennial of the 1921 Tulsa Race Massacre. The observances promoted healing and a spirit of unity. Tulsa, First provided a prayer room from February through June 1, offering space for 121 days of intensive prayer. The prayer room was described as “museum quality,” featuring historical accounts and images, newspaper reports, written prayers and prayer points and a joint anti-racism statement signed by Tulsa pastors. OBU recognized its first recipient of the 1921 Memorial Scholarship on Sept. 27. Johnie’Lee Berry said he was grateful for being the first student selected for the scholarship, which is funded by OBU in conjunction with the support of Oklahoma Baptists African American Fellowship.

The U.S. Supreme Court (SCOTUS) met for nearly two hours on Dec. 1, hearing arguments regarding Mississippi’s ban on abortion after 15 weeks’ gestation. The hearing prompted hope for pro-life advocates, not only for upholding Mississippi’s abortion ban but also reversing the high court’s precedent of nearly 50 years, specifically the 1973 case Roe v. Wade, as well as the Planned Parenthood v. Casey ruling of 1992. The Roe decision legalized abortion throughout the country, while Casey affirmed Roe but permitted some state regulation of the procedure. SCOTUS should render its ruling midyear of 2022.