Oklahoma Baptists ‘Advance the Gospel Together’ 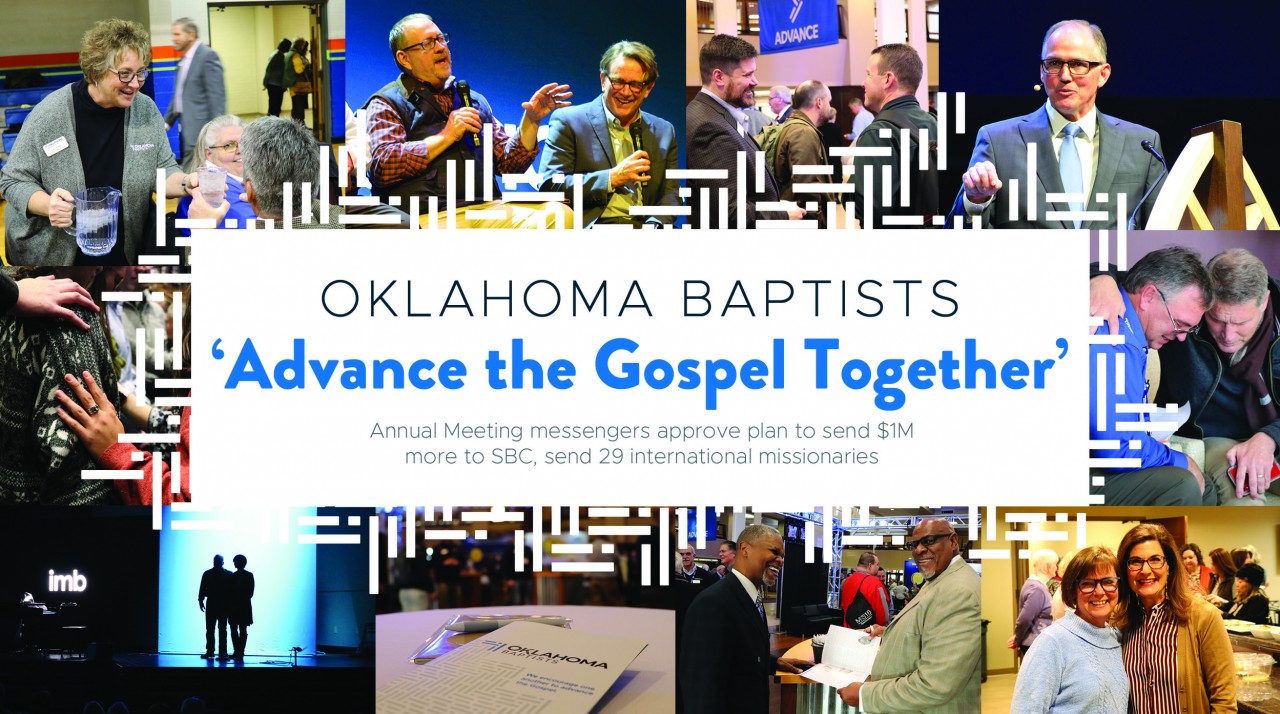 More than 1,000 Oklahoma Baptist messengers and guests from across the state gathered Nov. 11-12, at Oklahoma City, Quail Springs, for the 113th Annual Meeting of Oklahoma Baptists. 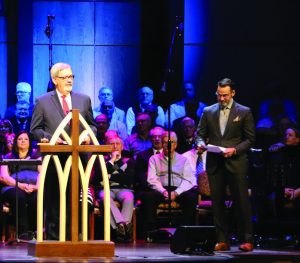 From approving an increased Cooperative Program (CP) spending plan for 2020 that allocates $1 million more to the Southern Baptist Convention (SBC), to a hosting an International Mission Board (IMB) Sending Celebration that sent 29 missionaries to the field, the 2019 Annual Meeting was marked by major ministry milestones.

Dilbeck calls to ‘Advance the Gospel Together’

During the Annual Meeting’s opening session, a tribute to military veterans for Veterans Day was observed, as well as various times of prayer, song and worship.

Hance Dilbeck, executive director-treasurer for Oklahoma Baptists, spoke about a new vision and ministry plans for 2020 and beyond. He presented plans that were approved by messengers that included: four major goals, a mission statement, strategic priorities and a new spending plan. 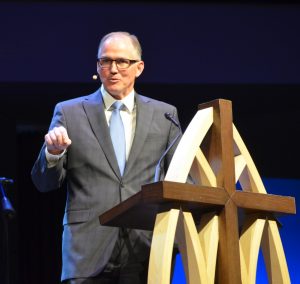 “Our convention staff exists to serve our churches,” he said. “We want every pastor to have a relational connection to our Oklahoma Baptist team.  We know we need strong partnership with our local associations.”

He pointed out strategic priority of encouraging pastors with the development of the Church Relations Group, which consists of ministry partners who will be “connected, present and accessible” for pastors and churches.

Dilbeck also emphasized embracing brokenness and making disciples for the advancement of the Gospel.

Dilbeck then turned attention to Oklahoma Baptists’ Board of Directors’ “four big church-centered goals,” which also were approved by Annual Meeting messengers. “These goals are ambitious commitments to reverse the downward trends we have seen. We will strive to increase weekly attendance 20 percent by 2025. We will work to increase baptisms 20 percent by 2025. By 2025, we want to send 20 percent more missionaries from Oklahoma through the IMB. We will try to give 20 percent more through the Cooperative Program by 2025.”

“In 2020, we are shifting 3 percent more to our SBC partners. Thus, 15 percent for affiliates, 42 percent for Oklahoma Baptists ministries and 43 percent for SBC. That is $1 million more sent to the IMB, North American Mission Board and our seminaries. We want to be as lean as possible, so that we can send as much as possible, trusting the Lord.”

Dilbeck stressed that “your convention staff of Oklahoma Baptists is smaller. Our core staff has been reduced by 15 percent. We are running as lean as we possibly can to be good stewards for Oklahoma Baptists.”

Preaching out of 2 Chronicles 20, Dilbeck delivered his executive director’s address, highlighting Jehoshaphat’s prayer. He then led messengers in an extended prayer time, based on this biblical passage. 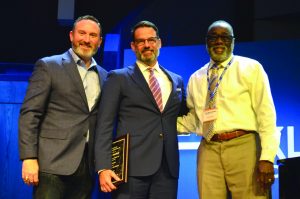 On Tuesday afternoon, the Resolutions Report was given. Messengers approved eight resolutions, including: “Resolution No. 2, On Brokenness as Opportunity for the Gospel,” “Resolution No. 3, On Increasing Baptisms in Oklahoma”; and “Resolution No. 7, On Ending Abortion, Promoting the Sanctity of Human Life.”

Gideon delivered the president’s address Tuesday morning, asking the question to Oklahoma Baptists, “Whose corner are you in?”

Sharing about his experiences of meeting people through fitness training, Gideon encouraged attendees to “embrace brokenness” by making friends with non-Christians.

“We are surrounded by people every single day,” Gideon said. “It’s time to identify the broken and do what we can to bind up their wounds. I want to know whose corner you are in. What relationship are you building in your life right now, as it pertains to a person who is lost and broken but doesn’t know it? We need to be there before they are broken. Build relationships with those who are prideful and unrighteous.” 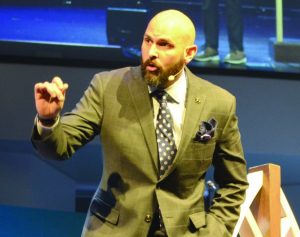 Rusty McMullen, pastor of McAlester, First, delivered the annual sermon Tuesday afternoon and opened with telling the story of J.B. Rounds one of the founding fathers of Oklahoma Baptists.

“J.B. Rounds recognized that the Gospel heals brokenness,” McMullen said. “He saw it in his own family. In fact, his dad came to know Jesus Christ as his personal Lord and Savior. This is what the Gospel can do in the lives of people all across Oklahoma and around the world.”

“Listen to the words of our forefather J.B. Rounds,” he said. “It’s an emergency! The Gospel advance is an emergency! You and I… are called to be men, women and churches of the Gospel of Jesus Christ. This is our history, and this is our future.”

During the Tuesday morning report, interim OBU president Pat Taylor introduced Heath Thomas as the next OBU president. Thomas, who currently serves as OBU dean of the Hobbs College of Theology and Ministry, will become the University’s 16th president, assuming the role in January 2020. 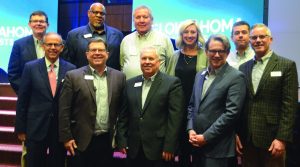 Some existing convention staff will fill some of the roles, including Brett Selby, Ever Borunda and Walter Wilson. Dilbeck announced the addition of new personnel, including Mark Dance, Griff Henderson, Buddy Hunt and Amy Petersen.

Dilbeck said, “Each of these ministry partners will be based in the field and carry a ‘ministry tool box,’ offering practical support and help to pastors and churches.”

From start to finish the 2019 Annual Meeting, God was honored and the “advance of the Gospel” remained the focus. For videos or more information, visit www.OklahomaBaptists.org.