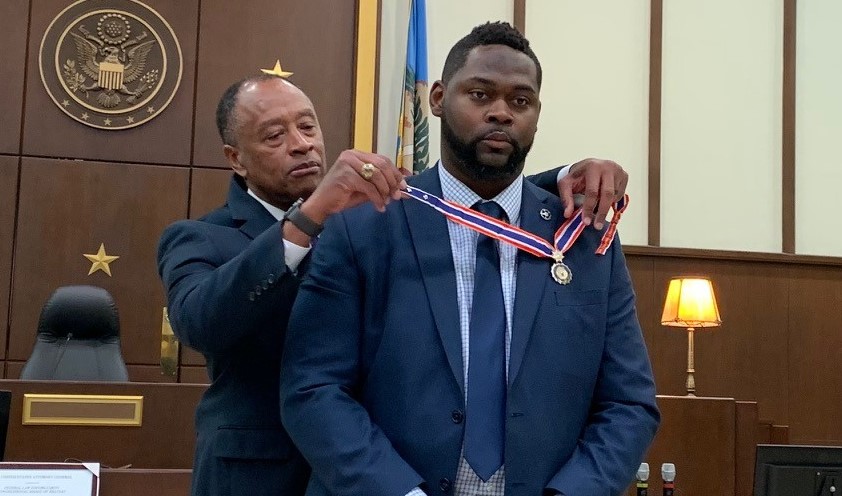 MOORE—The new pastor of Moore, Elevate Jermaine Vaughn was recently awarded the Congressional Badge of Bravery for his service with the United States Marshall Service. Vaughn, who has been serving as the bi-vocational pastor of Elevate since March of last year has been a U.S. Marshall Deputy for 14 years. 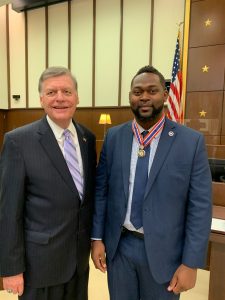 On April 7 at the William J Holloway, Jr. United States Court House in Oklahoma City, Vaughn, along with two other marshals and a postal inspector, were presented with the Congressional Badge of Bravery by the Director of the U.S. Marshalls Service Donald Washington and Oklahoma US Postal Inspection Service Chief Postal Inspector Gary Barksdale.

In May 2018, the Oklahoma Metro Fugitive Task Force comprised of U.S. Marshalls, Postal Inspectors and area law enforcement personnel were involved in an operation to apprehend a dangerous fugitive who was a suspect in a counterfeit currency operation. Vaughn, who was among these officers, was involved in a felony traffic stop wherein the suspect fired multiple rounds at task force members using a semi-automatic rifle. Vaughn, along with other task force members, engaged the suspect, returning gunfire and successfully neutralizing the suspect. As a trained medic, Vaughn rendered initial aid to those injured in the exchange.

“Day in and day out in communities throughout our nation, members of the United States Marshal Service perform a job that I think we can all concede is exceedingly dangerous,” Honorable U.S. Marshal Johnny L. Kuhlman told award recipients and guests attending the ceremony. “U.S. Marshalls, U.S. Deputies and Inspectors put their lives on the line to keep our communities safe and to insure the rule of law is upheld every day. Today we are here to officially badge members of your task force who were involved in the operation that brings us here today.”

“I can’t let anything go further without thanking members of the task force that were there that day,” Vaughn said at the ceremony. “Without a doubt, without your actions we probably wouldn’t have made it home that day. Most of all, I want to thank God for bringing us home to our wives and to our children. And then to the tremendous amount of support that came after that, in this traumatic event of getting stuck in a fight-for-your-life scenario, for months at a time.”

Vaughn attributes his strength in this traumatic event to His faith in Jesus Christ. He has been serving as the new pastor of Elevate since March, 21 when founding pastor, Steven Earp stepped down to pursue a calling to missions work.